Why don't turboprop planes have push engines that use thrust more effectively? [duplicate]

Ask Question
Asked 6 years, 2 months ago
Active 2 years, 4 months ago
Viewed 4k times
4
$\begingroup$
This question already has answers here:
Why are push-propellers so rare, yet they are still around? (12 answers)
Closed 6 years ago. 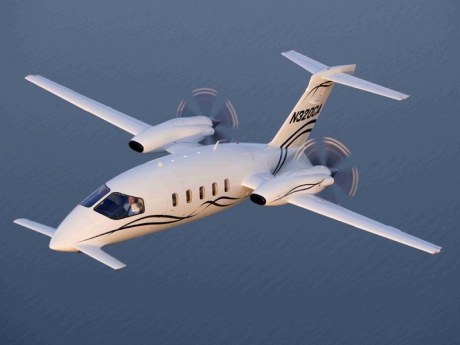 The Piaggo P-180 is one of the fastest private planes out there and uses the push system.

Pusher engines do not generate more thrust; they are basically the same engines, but mounted in a different configuration. As pointed out by @JanHudec in the comments, this configuration can be more efficient since in a traditional puller configuration the air displaced by the propeller washes over the wings and fuselage, thus increasing drag.

There are several considerations, such as those set out in the reference already given by Greg Hewgill in comments.

However, the main reason why propeller pushers are not as used on commercial aircraft is safety. Consider an aircraft taking off. If the pusher engines are placed, as usual, at the rear of the A/C, then the propeller tips are rather close to the ground. Even if the propeller does not actually make contact, any debris present on the runway and lifted by the A/C can conceivably end up within the propeller disk. This would be, naturally, at about the worst phase of flight to lose power.

This is perhaps less of a concern on drones and small aircraft used in GA. The pilot (and owner) may choose to forego a bit of safety to obtain a more compact aircraft and where the pilot's field of view is not interfered with by the presence of a spinner disk.

Another point that can be considered is the fact that turboprop engines are generally used in commercial aircraft that require shorter take-off and landing distances, to connect to smaller airports that handle jets with difficulty or not at all. In this case, a pusher configuration that requires higher speeds and longer runways would not be appropriate. On the other hand, in a puller configuration some of the prop-wash can be used to generate further lift through the Coandă effect and decrease take-off distance.

The Piaggio is certainly fast but I'm pretty sure the speed is due to the plane's overall sleek shape, smooth skin, and resultant low drag working together with the high-power turbine engines. I don't think the push prop design is any more efficient, though the Italian style is first class.

50
Why are push-propellers so rare, yet they are still around?

24
What is the measurement system used in the aviation industry?
9
How does one become an airline pilot in Australia?
7
Why do pilots' masks have more oxygen?
7
Why don't airport have heated runways to deal with winter conditions?
3
Why don't aircraft (commercial and military) use reflective visor windshields?
2
How do airlines and airport exchange data?
1
Other than a handful of airlines, do any small operators take PPLs and pay to train them to commercial?
0
Why don't airlines place some physical separator between passengers in the planes to prevent the spread of COVID-19?