I live near O'Hare airport and see hundreds of planes every day. This evening a plane flew past that did not have the standard red - green wing tip lights. It was white only on both sides. It caught my attention because of that, and because the plane was unusually quiet...not silent, but quieter than most everything accept the smallest private planes. Any suggestions as to what I saw?

You don't tell us if you're viewing this aircraft from the front (approaching you) or the back (moving away from you), so let's look at all the options:

Aircraft have three colors of steady-burning navigation/position lights: Red on the left (port) side, Green on the right (starboard) side, and White at the aftmost position (tail). This diagram shows the required lighting coverage (as implemented on a typical small aircraft): 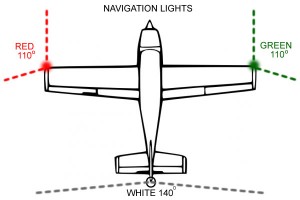 (With the exception of a "mast light" these are identical to naval vessel position lights - the function of a mast light is performed by the landing light, though it's not used as a "position light" the way the others are.)

On some aircraft there will also be aft-facing white position lights on the wingtips, combined with the navigation and strobe lights:

The aft-facing position lights on the wingtip improve visibility at night, particularly flying over brightly lit urban areas (a problem sailing vessels don't have). They also give a visual reference to determine the size (wingspan) of the aircraft.

Finally (just to throw another wrench in the works) some aircraft are equipped with wingtip "recognition lights" (forward-facing white lights on the wingtip): 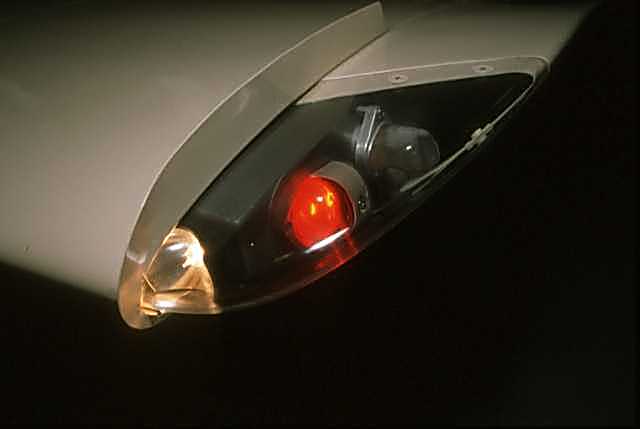 These are typically used on the ground or in approach to landing, but when illuminated the brighter recognition lights can make the forward position lights difficult to see, particularly from the ground where your eyes probably aren't adapted for darkness.

So putting it all together:

If you're viewing the aircraft from the side (it's flying perpendicular to you) you will see either the Red or Green light until it passes in front of you, at which point one (or more) of the white lights will come into view.

Not the answer you're looking for? Browse other questions tagged aircraft-identification aircraft-lighting or ask your own question.

10
Do lights on wingtips change color at different times of the day?
10
Is there a reason Germania aircraft cabins have blue lights?
5
What aircraft has this pattern of white strobe lights?
3
Which Airbus models have exterior LED lights? (Taxi, Landing, Rotating Beacon)
12
Do aircraft use their lights to 'say hello' to each other?