Right now if an airliner wants to fly a really long distance (eg., a Boeing 787 flying from Seattle to Tokyo), it has to load itself down with lots and lots of fuel, which in turn weighs thousands and thousands of pounds. This, of course, makes the flight of the aircraft less efficient than it could be1. Thus, if the craft could theoretically carry half as much fuel, that should increase the fuel efficiency of the craft, right?2

Mid-way refueling seems like it would be a Good Idea™ at that point. Of course, landing would add a heck of a lot of time to the flight, so it seems the better option would be mid-air refueling. It would allow for the aircraft to be more efficient, without the need for stopping on a long journey.

Boeing and Airbus both make a few airplanes | that can do | mid-air refueling, in fact one of them is a highly modified 747-200 (properly called a VC-25) used as Air Force One: 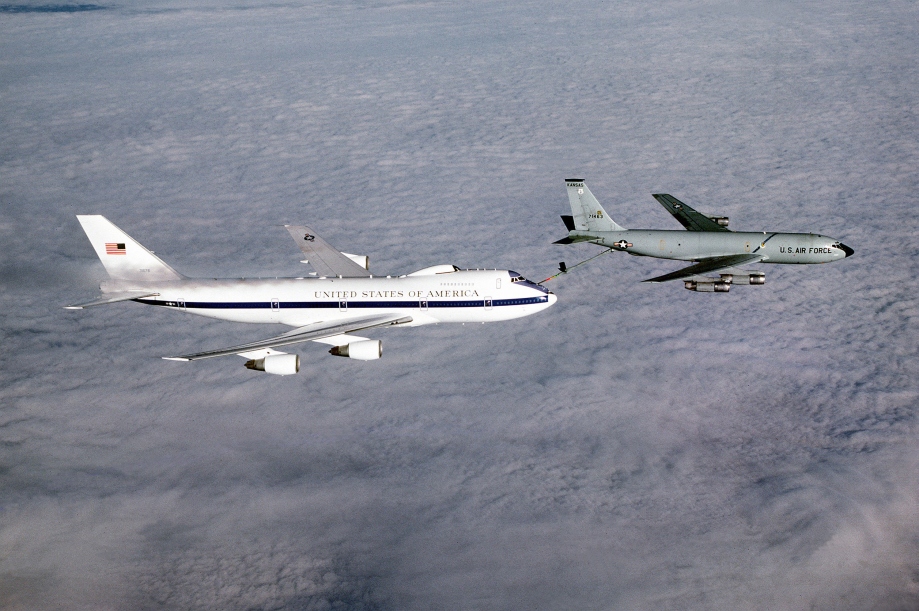 I assume that, because Airbus and Boeing's engineers and sales managers are really quite smart, they have a really good reason that they don't fit/sell this feature on any civilian transportation aircraft. But I'm not sure what that reason is.

Does anyone know why airlines do not use aircraft that are capable of mid-air refueling?

1 If I'm not mistaken, increased weight means an increased AoA to maintain level flight, which in turn increases induced drag from the wing. Less fuel would mean less induced drag or, if mid-air refueling were common practice, a wing that was designed to be more efficient because it was required to handle less weight.

2 I don't know by how much, if it's not that much, well, that might explain why nobody does this.

Fuel Quantity Unlike smaller fighter jets, you would need to offload a substantial quantity of fuel. For a B777, you're looking in the range of 60 tonnes of fuel for half a tank. The boom of a KC-135 (faster than a basket) can do around 3 tonnes a minute. The math comes to then 20 minutes of aerial refuelling. The KC-46 can do perhaps 180 tonnes, so you might squeeze out three refuelling operations from one flight.

Risk This is considerably more dangerous than the very conservative safety margins aircraft normally operate within. You would have one aircraft filled to the brim with fuel, and another aircraft with 300+ passengers. A quick search on YouTube is enough to propose this entire thing is very dangerous.

Furthermore, you need to consider that the aircraft needs safety margin to divert should refuelling not work, which cuts into the benefits you can expect.

Many intercontinental routes will be flown at night, making the manoeuvre more difficult.

Refuelling Area Looking at the route you proposed, the closest airfield would probably be in Alaska, at least 500km away. Guess another relevant area would be Iceland/Greenland. Even if you did reroute, you'd get away from the jetstreams that aircraft over the Pacific use lying considerably further south, reducing efficiency. The same scenario applies for eastbound Atlantic flights.

Logistics Planning is difficult. Each aircraft would have to be rerouted to intercept the tanker at a certain time and place. You want to refuel them perfectly one after an other, which is almost certainly not possible. There's just not the volume of aircraft movements feasible for this, especially for the ultra-long flights where it may have the greatest benefit.

Other Landing Benefits Include changing crews and possibly offloading passengers.

Applicability The number of flights where this can be practically implemented and used is very limited and for all intents and purposes, you can just land the plane itself and refuel it. Even for the route you propose, it's around 7,500 km which is not a lot for a B777.

Since the tanker needs to carry 5$\cdot$15.1% = 75.5% of the airliner's landing mass in fuel, it needs to be an airliner-sized aircraft itself. Add more if the tanker needs to do even as much as to take off, let alone fly to a refueling point and wait there. And the fuel saving needs not only to pay for the tanker's fuel needs, but also for its crew, maintenance and depreciation.

Aerial refueling is a great technology to make complex military scenarios possible, but is a very ressources-hungry beast.

The people from Cruiser-Feeder http://www.cruiser-feeder.eu/ try to make it happen.

Here is part of the abstract from a paper describing their approach:

In this paper it will be described how the safety of air-to-air refuelling has been assessed, and how proposed new or amended regulations and acceptable means of compliance have been defined

They even created a conceptual design of joint-wing tanker for civil operations: http://www.cruiser-feeder.eu/downloads/li-la-rocca---conceptual-design-of-a-joint-win.pdf

In their papers, you will find data for which flights mid air refuelling is worth it, how they want to make it happen, and some interesting facts.

Not the answer you're looking for? Browse other questions tagged airliner airline-operations refueling mid-air-refueling or ask your own question.

1
Cruiser-Feeder Concept - feasible?
0
Why they don't refuel A-340 airliners in flight?
20
Why is mid-air refueling worth it? (or is it at all?)
10
How can I calculate the fuel consumption of an Airbus 320-200 at various loads?
1
Is it possible to reload Electric Aircraft in mid-air from a tanker aircraft?
2
Technical factors to consider for retrofitting aerial refueling for commericial aircraft

23
How is it safe for helicopters and Ospreys to refuel in mid-air?
20
Why is mid-air refueling worth it? (or is it at all?)
15
How are in-air refuelling craft grounded to each other?
5
What are the costs and labour hours for converting a B767 airliner to an aerial refueling aircraft?
11
Why aren't larger airliners such as the A380 more efficient than smaller ones?
1
What is the drag induced by a high bypass jet engine on an airliner?
1
What procedures are used for midair refueling without air supremacy?
35
Why don't modern jet engines use forced exhaust mixing?