How does a pitot plate work?

I understand the basic concept of the pitot tube in that it measures the air pressure coming into the tube in order to compare it to a static pressure measured elsewhere on the aircraft.

The B-2 bomber, however, has pitot plates in order to eliminate the radar reflectivity of the pitot tube.

How do these plates work, as compared to tubes, and why aren't they more common, since a flat surface that is less radar reflective would also, likely, be more aerodynamic?

The B-2's pitot plate has actually been the cause of an accident in conditions that may or may not have had the same effect on aircraft with pitot tubes.

Pitot plates work much like pitot tubes; they measure the pressure of incoming air. The main difference is just how they measure it: pitot tubes measure the ram force of air while pitot plates measuring how much air is constricted by an obstruction. Pitot plates direct air through a "plate" with a hole that impedes the flow almost like how a Venturi tube accelerates fluids. Pictured: Pitot/Orifice plate

Pitot tubes are easier to maintain, inspect, and install. Some of their main problems that you might not encounter with a pitot plate, such as icing, are countered with tested and approved safety systems (like heating). In addition, pitot tubes are not the only instrument to measure airspeed; most commercial and GA aircraft use pitot-static systems in which other pressure sensors are used to get a better and more reliable reading. Pitot plates are advantageous in that they reduce air pressure about 5:1 rather than the pitot tube's 10:1 (meaning yes, less drag in some sense) but on such a tiny scale it makes barely any difference. On the flip side, pitot plates have very inaccurate readings at lower speeds (though so low that it probably would not matter for any jet aircraft). Also, it is to my knowledge that pitot plates are used mainly for fluid research, sometimes not even related to aviation.

Since pitot tubes are relatively small compared to the size of an aircraft and are streamlined anyway, there would be little to no noticeable improvement in aerodynamics. You would think that jetliners have completely clean surfaces, but guess again: 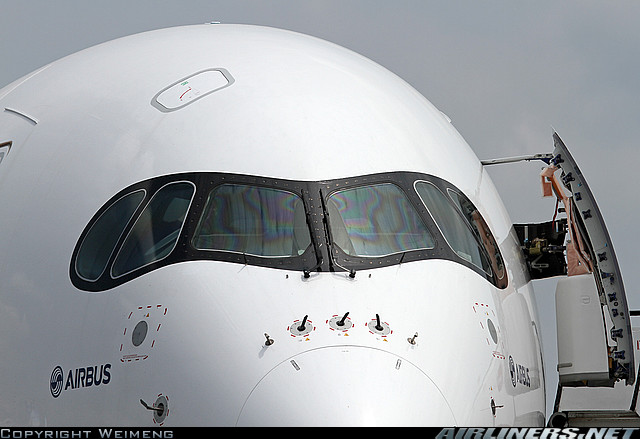 Removing a pitot tube won't make a difference. Note: the gray circles outlined in dotted red boxes are pitot-static ports, which, combined with an aircraft's pitot tubes, make up the pitot-static system. They can measure air pressure for both airspeed and altitude among other things.

Final thing I wanted to clear up: flat surfaces are generally less aerodynamic than curved surfaces. Someone got too much of that idea when designing this plane... /s

Not the answer you're looking for? Browse other questions tagged aircraft-design flight-instruments pitot-static or ask your own question.

12
What are the "Static Ports" in a Boeing 767?
12
How are antennas integrated into stealth aircraft?
11
What alternatives to pitot static systems are available or in development?
1
What are these two circular areas on the fuslage of Fokker 100?

21
Why the pitot tube is heated but the static port isn't?
14
How is the pitot system drained?
4
How can I check pitot static leak without a test box?
8
How does Pitot Heat influence airspeed indication (assuming no ice or moisture)?
6
Why does indicated airspeed change with altitude?
17
Is it possible to accurately measure airspeed without pitot tube?
0
What aerodynamic phenomenae can decrease the pressure gradient in Boundary Layer Ingestion?
3
How are these parameters derived from readings of sensors in an aircraft: angle of attack, slip angle, and airspeed?
6
How long does a pitot tube last?