Any info on very strange wing endings on this Stemme glider?

Do you have any info on this strange wing endings used on Stemme glider? 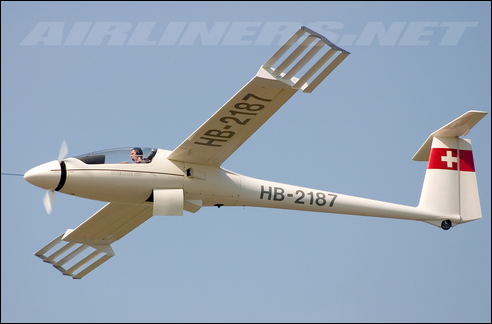 This was a test aimed at measuring the effect of feathered wingtips. The Stemme S-10 has a four-part wing, and for the experiment the outer wing panels were removed and replaced by five staggered small wings, as shown on the picture in your question. This reduces wingspan from 23 m to only 11.4 m plus the span of the wingtips, in total maybe 14 m.

A feathered wingtip shows less induced drag than a straight wing of identical span, similar to a winglet, because it can involve a bigger mass of air into the creation of lift. But it cannot perform wonders, the effect is small.

The concept behind this experiment is called "winggrid" and the brainchild of Dr. U. La Roche. See here for one of the few still active sites on the topic - the original site http://www.winggrid.ch has long been abandoned.

Sad fact: This aircraft was destroyed in a mid-air collision in 2007. At that time, it had been reverted to the original wingtips.

Not the answer you're looking for? Browse other questions tagged aerodynamics glider or ask your own question.

57
Is a winglet better than an equal span extension?
38
How does an aircraft form wake turbulence?

41
Why would a glider have water ballast? If it is trying to stay aloft without an engine, wouldn't it be better to be as light as possible?
9
I'm thinking of building a balloon-launched glider, is this idea plausible?
7
Is there a source of information on the Aerodynamics of Non Rotating Round Disc Wings?
21
How can we calculate the benefit gained from taping glider wing roots?
10
Is this paragraph about the dihedral effect in the FAA's Glider Flying Handbook correct?
2
Are loops or rolls allowed in the "utility" category in any US-certified airplane or glider?
1
Could a triplane fly using a dihedral wing in the middle?
0
Is it fairly common for student glider pilots to have wing tip strikes, especially in gusty cross wind conditions?
10
Why do the ailerons of this flying wing work oppositely compared to those of an airplane?