A YouTube footage of a KLM Boeing 777 landing at Schiphol airport in the Netherlands is certainly scary as the plane bumps and weaves and rolls from side to side. 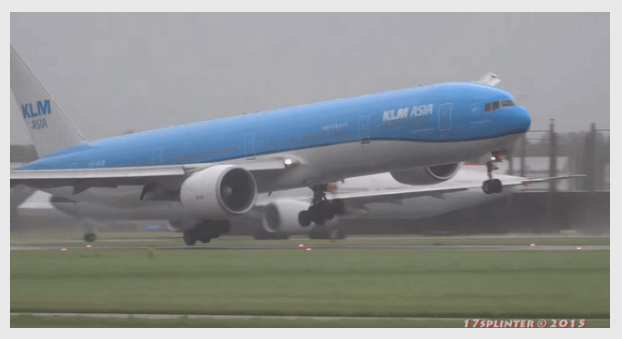 Are pilots generally trained to handle such eventualities (or are such landings common in certain regions of the world?) or was everyone involved including the pilot taking a risk in this case without diverting the aircraft to a nearby safe location?

Crosswind landings, like the one in the video you linked, are very common. In fact, landings with no wind or only headwind are rare.

There are several techniques pilots are taught during their extensive training to land aircraft when there is crosswind. The Wikipedia article I referenced above lists them. Since your question isn't about them, we won't discuss them.

Certainly, extreme weather situation are not very common. Some parts of the world experience extreme weather more than other areas. Diverting to other airports is not always an option and in some cases, once an airplane is on the approach, going around becomes impossible.

In the US it is required by law to be trained in cross wind landings.

For large aircraft that require a type rating...

...(2) Received a logbook endorsement from an authorized instructor who has found the person proficient in the operation of the aircraft and its systems.

(i) Normal and crosswind takeoffs and landings;

(ii) Wheel landings (unless the manufacturer has recommended against such landings); and

On a side note cross wind landings are very important since not all airports have 2 runway options. Some large commercial airports will have 2 crossing runways which will allow you to pick the best one for the days winds (they are usually built to the general prevailing winds in the area). This does not mean there will be no cross wind but it does allow you to mitigate it. Smaller airports may only have a single runway (or 2 parallel runways) which means you have no method of mitigation for the crosswind. There are even some big airports that are only single runway due to space or geographic restrictions.

It should also be noted that airplanes them selves have a demonstrated cross wind component to which they are tested to be safe to land in a cross wind of said velocity. This is not necessary a maximum (although it can be) but it is often used as such.

As for how often this happens that is largely a factor of the airport and the local weather. For example I used to fly out of KPNE they have 2 runway options (6-24 and 15-33) they would use what ever was the best runway for the wind that day unless you needed the precision approach on 24. This made landing there easy (150 x 5000 or 7000 helped as well) as there was never really more than a 15 degree crosswind. I now fly out of KDYL which is a single runway airstrip that almost always has a crosswind, really keeps you on your toes.

Cross wind approaches are perfectly safe and are not out of the ordinary. I have seen some people mistake the phrase Uncoordinated Flight as meaning a sideslipped crosswind landing is unsafe which is incorrect. The plane can be uncoordinated because it is side slipping to the landing which is done deliberately by the pilot.

The answers so far deal with commercial flying, from a recreational perspective pilots are only as well trained as the amount they practice. Commercial organizations generally train their pilots for crosswind landings in simulators, and they usually fly enough to get real crosswinds often enough to keep in practice. Private pilots are trained in crosswind techniques in initial training, keeping good crosswind abilities is up to the pilot once they pass their test. I personally practice crosswind take-offs and landings as often as I can, however I know many pilots who won't fly if there's more than 5 knots across the runway.

Yes, pilots are trained for crosswind landings. I trained on a Cessna 172 as Paso Robles. The video was completely normal. A roll of < 10 degrees is not serious at all, well within a competent pilot's operational abilities. The news story was written by someone who doesn't fly, thought it looked 'scary' and filled 90 seconds with nonsense, IMO.

I'm a little late to the party, but here is my take. In that landing I see turbulence but I don't see an obvious crosswind component.

In any case, dealing with crosswinds is something that happens more often than not when landing (at least at many airports and airfields). So every single pilot has dealt with this since the very first days of basic training.

As for the wing rocking, correcting an off-level wing is probably the very first thing a student learns when getting acquainted with the aircraft's controls. It is completely intuitive for every single pilot.

In steady winds, even when strong or very strong, there is no excuse for bumping around like crazy. You have the "concept" of a "stabilized approach", and only turb is a valid reason to destroy a stabilized approach. In turb that's a different story, but then you still would have to explain why you even attempted the landing. If turb is too strong, it's a good reason to divert. The famous Lufthansa case made the media (and YouTube footage) several years ago where they even had a wing strike on the left side, when tons of other aircraft had cancelled. These two pilots pressed on, seemingly suffering from the eponymous get-home-itis, and you see the result. So ... even turb is not always a valid excuse, because diverting is a safer option (assuming you don't HAVE to land because of low fuel or similar -- but then you'd even have less excuses, because you shouldnt' fly into turb with low fuel, etc.).

Not the answer you're looking for? Browse other questions tagged landing flight-training crosswind or ask your own question.

20
Is it possible to go-around at Lukla Airport?
14
A321 Two unsuccessful strong crosswind landing attempts. What was actually going on?
13
What is a demonstrated crosswind component?
3
Does landing in extreme weather conditions require any different or special training?