What are lateral, longitudinal and directional stability? [duplicate]

Ask Question
Asked 7 years, 4 months ago
Modified 4 years, 9 months ago
Viewed 63k times
8
$\begingroup$
This question already has answers here:
What does it mean for a plane to be aerodynamically stable? (2 answers)
Closed 7 years ago.

When we talk about aircraft having a stable configuration, it refers to lateral, longitudinal and directional stability. Can someone give a practical explanation of what those are and how they work?

The answer here is found in the Pilot's Handbook of Aeronautical Knowledge (and probably elsewhere) and is as follows: 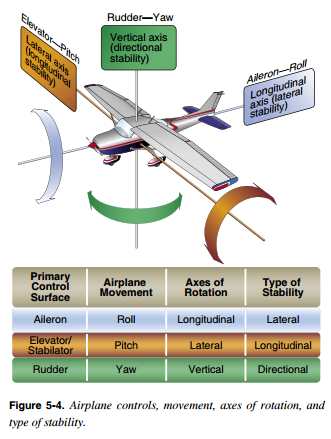 Rotation about any one axis is the job of one linked set of control surfaces as mentioned above. Stability in that same axis, roughly defined as keeping that line passing through your aircraft pointing in the same direction, is the job of the other two surfaces in concert, but primarily the one that would move the endpoints of that axis up or down relative to the aircraft. So, elevators provide lateral rotation to achieve longitudinal stability, and vice versa for ailerons.

It differs slightly for the vertical axis, as if your plane is both longitudinally and laterally stable, it's also "vertically stable", however the plane is longitudinally and laterally stable, but completely out of control, in a "flat spin". Stability in the vertical axis therefore is secondary to "directional stability", which keeps the longitudinal axis pointing in a particular direction along the geometric plane formed by the lateral and longitudinal axes. In this case the rudder both controls yaw and provides directional stability.

In addition to control surfaces, weight and especially the aircraft's center of gravity is important in stability. Ideally, most small planes are most stable in level flight when the CG of the aircraft is exactly on the centerline of the aircraft (between the tip of the nose and the tip of the tail) and slightly forward of the aircraft's center of lift (which depends on the wing's angle of attack but is usually close to the thickest point in the wing's cross-section). In this configuration, while the aircraft is travelling forward normally, downwash from the wings flow over the top of the horizontal stabilizer, keeping the nose level. In a stall, the slight nose-heavy configuration along with the stabilizers in the rear will cause the nose to point downward gently, restoring normal airflow and allowing the pilot to recover.

If the CG is too far forward, the pilot will need to apply upward pitch or trim to keep the nose level. This will reduce the amount of travel he will have available to pitch up, and in a stall, the plane will nose down sharply and the elevator may provide insufficient force for the pilot to pull out of the dive.

If the CG is too far aft, the plane will want to nose up constantly, and the pilot will have to apply downward elevator or trim. In a stall, a plane with an aft CG won't nose down, preventing the pilot being able to restore normal airflow over the wings. This is especially dangerous in an uncoordinated stall aka a spin; the aft center of gravity in combination with the forward thrust of the engine will "stabilize" the plane in the spin and make it impossible to recover.

If the CG is off the aircraft's centerline, the plane will tend to roll towards its heavier side. This is compensated for with ailerons or aileron trim, and for most everyday flight it's the easiest to compensate for, but it can cause unfamiliar roll behavior and a tendency to spiral down, which the pilot must be aware of and correct for.

Lateral stability is roll stability: the tendency of the aircraft to reduce its rolling and return to an upright position unless continually maintained in position by e.g. the ailerons. (This is usually only partial.)

Longitudinal stability is pitch stability: the tendency of the aircraft to reduce its pitching and return to a level position (relative to the direction it's traveling, at least) unless countered by e.g. the elevators.

Directional stability (also known as vertical stability) is yaw stability: the tendency of the aircraft to reduce its yawing and return to a straight position (relative to the direction it's traveling, at least) unless countered by e.g. the rudder.

All these are necessary to avoid having to continually make tiny, precise adjustments to all the controls.

21
What does it mean for a plane to be aerodynamically stable?
18
Why does the yoke "stick" in a turning position?

8
Do the effects of turbulence change when banking/turning compared to level flight?
36
Why do aircraft need a vertical tailfin, but birds don't? (and lots of fish do?)
7
How does the line of thrust affect longitudinal stability?
4
Sensitivity of aircraft stability with respect to the CG location
3
Does dihedral improve roll stability in gusty conditions?
1
What differentiates the entry procedures for spins and snap rolls?
6
Why does a Cessna 172 have dihedral wings if it has high wings?
0
How can I calculate the tail area required to achieve longitudinal static stability?
3
Why is the CG assumed to be between the CP and the tail?
5
Why does static directional stability decrease with altitude?