When does the use of afterburners save fuel?

An afterburner uses a lot more fuel for a little more thrust (rule of thumb: 50% more thrust for 5 times the fuel flow with full dry power). Is a flight maneuver possible where using the afterburner will result in less fuel use than flying the same maneuver with dry thrust?

To be precise: I am looking for a situation where the aircraft transits from state A to a desired state B. The transition is possible with both dry and wet thrust. Please describe a pair of A and B where less fuel is used in the transition when the afterburner is lit! 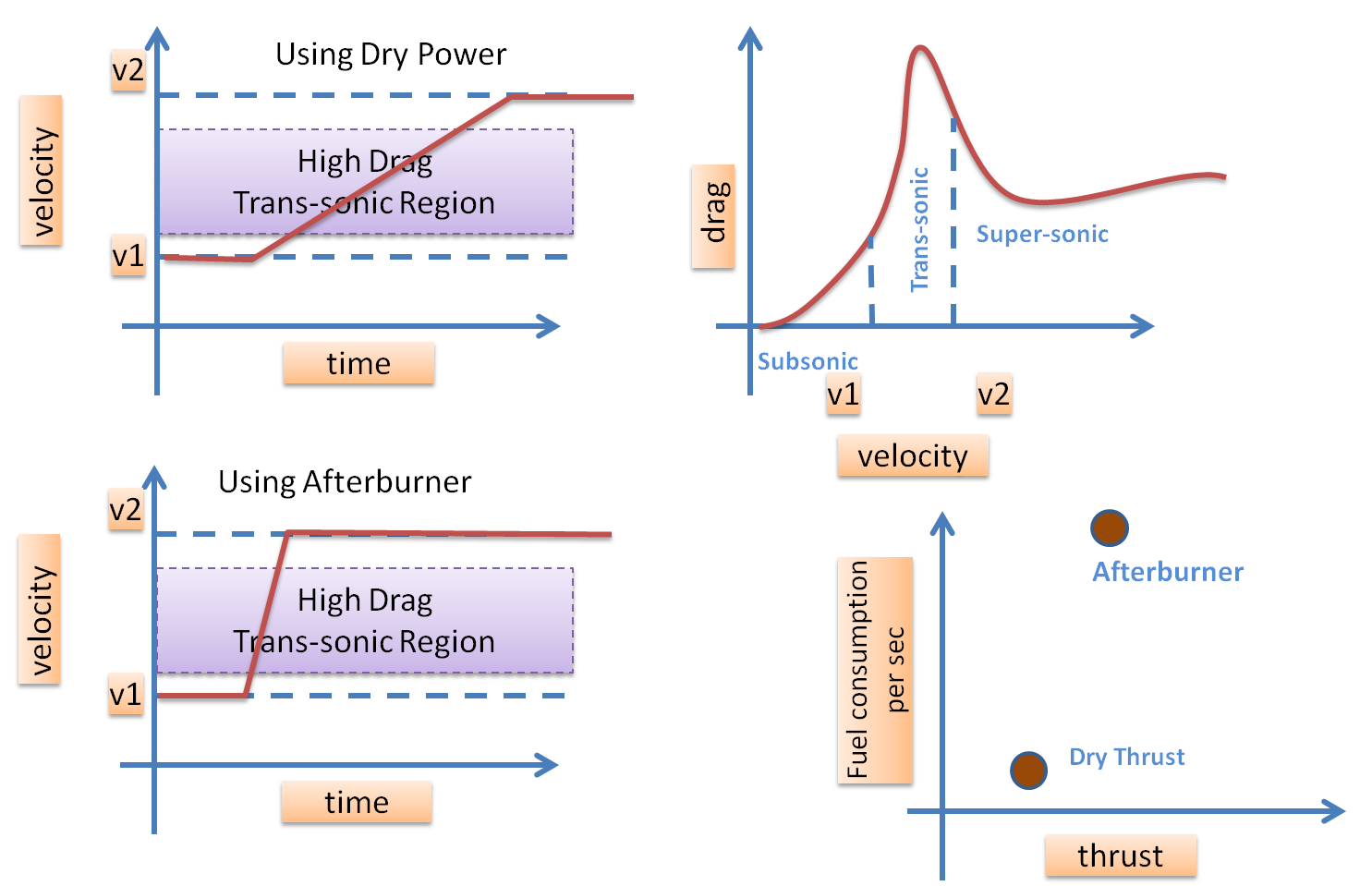 Reasoning: To get from any point A to B in parameter space should usually be a state function i.e. path independent.

i.e. You can give many tiny increments or one large increment.

In our context a parameter space means mostly a {velocity(v), altitude(h)} pair. To go from A{v1,h1} to B{v2,h2} you need a certain thrust profile. The required thrust profile is not unique.

Now the above path independance statement is true in general, except when a dissipative force exists. Now you no longer have a state function.

Since drag, a dissipative force, is indeed a strong function of speed it will help to not linger in the high drag region i.e. transsonic region with wave drag. In this zone the drag coefficient increases rapidly and you will have a total drag much higher than at both sub-sonic and super-sonic speeds.

And that would give a high thrust afterburner the advantage needed over a dry engine: On afterburner you can zoom through the transsonic region rapidly than trudge through it incrementally on dry thrust. Thereby saving on drag losses. You are still consuming more fuel per unit time but the time spent is reduced so much that it makes the higher specific consumption worthwhile.

Caveat: This is just an qualitative argument. A more mathematical argument is needed to add rigor to the analysis. 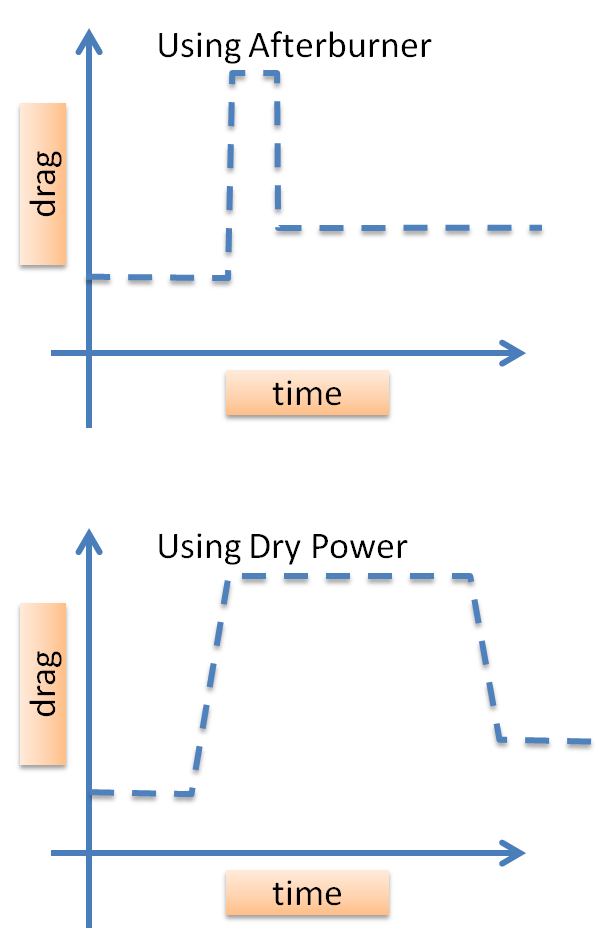 Virtually never in most aircraft. Afterburners usually increase fuel consumption by a factor of between five and ten from maximum non-afterburning throttle ("full military power"), while the speed increase is often less than double.

There was one singular aircraft designed to use afterburners efficiently, the SR-71. Essentially it was designed with a "bleed bypass"; at speeds beyond about Mach 1.5, air in the first compressor stage was diverted behind the combustion chamber using a series of ducts, where the afterburner would then have cleaner air to burn. This drastically improved the efficiency of the engine's afterburner, making it effectively a ramjet design. I can't say whether its range was improved by the use of afterburners, but the pre-bypass speed was limited to around Mach 1.8 while the afterburning speed was greater than Mach 3.3, almost a 100% speed increase and unmatched by any air-breathing craft that has flown since.

Not the answer you're looking for? Browse other questions tagged jet-engine fighter jet maneuver theory or ask your own question.

4
Does lift-to-drag vary with anything beyond geometry?
3
Since when had fighter jet designer stopped caring about Whitcomb's Area Rule?

6
Can the thrust of a turbofan be increased by increasing bypass ratio?
0
Is it possible to create a direct supersonic airflow to a turbofan's afterburner in order to enhance the performance or reduce the fuel consumption?
27
Why not just drop an engine on fire?
1
Would “wind turbine generators” in the bypass stream save fuel for jetliners?
13
How much thrust is lost due to the bleed air system?
13
How does a turbofan with afterburner continue to function in extreme humidity and rain?
10
How does turn radius change with velocity between Vm and Vs, as in a 180 degree turn in a canyon?
5
Do afterburners use excessive amounts of fuel?
2
Why can such a small difference in thrust make such a big difference in maximum speed?