There are a couple of American military aircraft (the retired F-14 and the B-1 come to mind immediately), that have variable swept wings. I know that they keep the wings full out (roughly perpendicular to the body) during take off and landing, and they have the wings swept back for high speed flight.

But I've never really understood why? I assume that at lower speeds the wings-out configuration creates more lift. But, why does sweeping the wings back help at high speed?

For bonus points: how does the performance gain make up for the cost in weight and complexity created by having a variable swept wing? Or perhaps there isn't much of a gain and that's why most military aircraft don't have variable sweep?

By sweeping wing backwards, you essentially make the air 'see' another airfoil.

Look at these two diagrams: 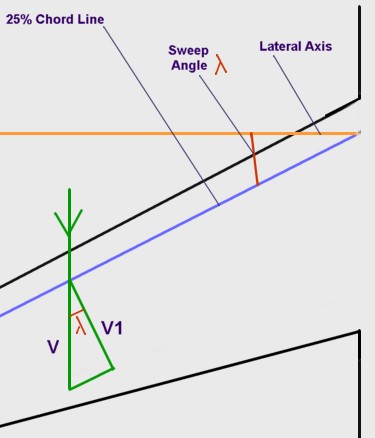 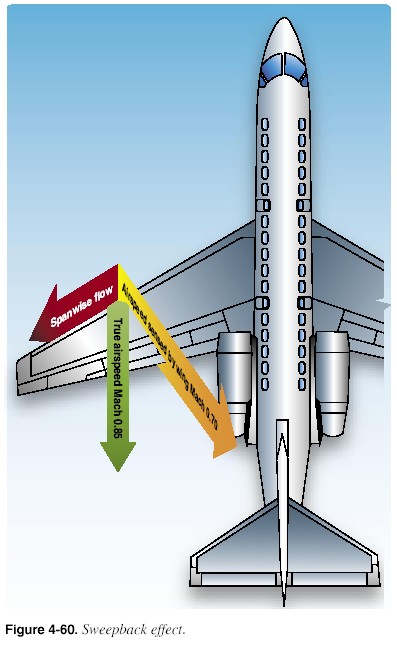 When the air meets the wing, it travels along $V$. This 'seen' airfoil is a lot thinner than $V1$ (which is perpendicular to the leading edge). As the aircraft experiences less pressure, the aircraft experiences less drag. However, this also reduces the velocity of the air. This is good if you're looking to delay things such as shockwaves as the air goes supersonic, since spreading the force out more delays this effect and the flow separation which comes with it. 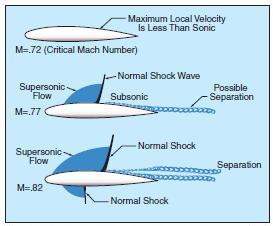 Unfortunately, for all the advantages, It would have a very high landing speed. So the wings are swept forward, the aircraft has a more effective aerofoil for lower speeds, and the minimum airspeed decreases correspondingly. There is now more drag, but also more lift which you need for the slower speed. 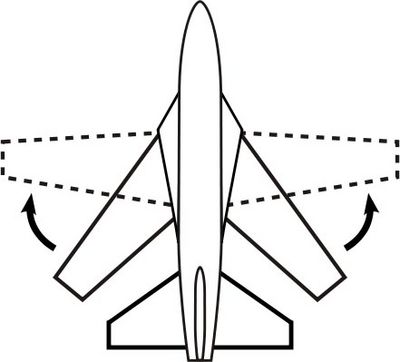 Wikipedia puts this nicely in not all too-complex terms:

If we were to begin to slide the wing sideways (spanwise), the sideways motion of the wing relative to the air would be added to the previously perpendicular airflow, resulting in an airflow over the wing at an angle to the leading edge. This angle results in airflow traveling a greater distance from leading edge to trailing edge, and thus the air pressure is distributed over a greater distance (and consequently lessened at any particular point on the surface).

This scenario is identical to the airflow experienced by a swept wing as it travels through the air. The airflow over a swept wing encounters the wing at an angle. That angle can be broken down into two vectors, one perpendicular to the wing, and one parallel to the wing. The flow parallel to the wing has no effect on it, and since the perpendicular vector is shorter (meaning slower) than the actual airflow, it consequently exerts less pressure on the wing. In other words, the wing experiences airflow that is slower - and at lower pressures - than the actual speed of the aircraft. One of the factors that must be taken into account when designing a high-speed wing is compressibility, which is the effect that acts upon a wing as it approaches and passes through the speed of sound. The significant negative effects of compressibility made it a prime issue with aeronautical engineers. Sweep theory helps mitigate the effects of compressibility in transonic and supersonic aircraft because of the reduced pressures. This allows the mach number of an aircraft to be higher than that actually experienced by the wing.

Is there a performance gain? Depends on your definition:

Having fixed swept wings would imply that:

If I understand it correctly, today aircraft today rely more on system such as high-lift devices like for instance slats and flaps.

Swing wings combine the high sweep angle helpful for Mach 2+ flight with tolerable low-speed handling characteristics. They were needed to fulfil the demands on military aircraft called for in tenders before planners realized in the late Sixties that high speed was not needed.

Sweep helps also to make the transition into the supersonic realm more gentle by lowering the drag maximum encountered around Mach 1. But below Mach 1 it starts to become a liability. Sweep

Therefore, a wing swept by more than 60° becomes rapidly irreconcilable with regular military requirements like short field length and good subsonic handling characteristics at high angle of attack. A swing wing is the only way to combine acceptable high- and low speed performance.

But there is more to sweeping wings:

The main benefit for the B-1B and the Tornado (which were both supposed to penetrate air defense at low altitude) is the lower lift slope of a swept wing, in combination with the high wing loading of a swing wing design. This translates into much better riding qualities in turbulent air. If the plane hits an updraft at high speed and in the high density air near the ground, the lift increase is massive if the wing is unswept. Sweeping it reduces the lift increase with the cosine of the sweep angle, and a gust which would have produced 4 g with the unswept wing produces only 2 g with 60° sweep. This effect is further increased by the change in wing span, which will reduce the load factor even more.

The other benefit is the possibility to use high-lift devices on the wing. The trailing edge comes forward and out for the landing configuration, so the pitching moment of the flaps can be controlled by the elevator and more air can be used for lift generation. Trailing edge flaps on a delta wing (which is basically the swept-back configuration), on the other hand, do not work well at all. This is helpful both for landing on a carrier and for taking off for a long-range bombing mission.

Well the problem is not only the lift created but also the drag. At high speed transonic and hypersonic, the drag created by straight wings is much larger than the drag created by swept wings (or even better by delta wings). This mainly comes from the fact that due to the sweep angle the effective Mach number the one perpendicular to the leading edge of the wing is lower than the Mach number of the aircraft. This helps a lot in reducing the drag due to chocks and thus sustain very high speed with not too much drag and hence thrust required. So far so good, but...

Delta wings and at smaller degree swept wings at low speed present what is called a spanwise flow. This is the fact the the flow is pushed in the spanwise direction from the root to the tip. This increases the distance of the flow over the wing and thus the boundary layer thickness at the trailing edge (compared to straight wings). This has the immediate effect to lower the stall angle or at least the angle at which the first separation appears. This also reduces the lift generated when the aircraft is flying at a non negligible angle of attack. This is particularly the case for take of and landing for which the straight wings yield better performances.

To sustain the aircraft in the air with a smaller angle of attack means to fly faster and this is obviously not is looked for during take off and landing. This is why it is beneficial to use variable swept wings for some military aircraft which need to take off or land on short distances and then needs a smaller take off and landing speed.

Not the answer you're looking for? Browse other questions tagged aerodynamics airspeed or ask your own question.

2
Why aren't variable swept wings being used in newer military aircraft?
1
Why don't commercial airliners use variable sweep wings?
0
Why manufacturers does not producing variable sweep wing in our current scenario?
0
Why don't commercial aircraft have variable sweep wings?
111
Why is the maximum speed of current fighter aircraft lower than those from the 1960's and 1970's?
20
Was the Boeing 2707 design flawed?
11
What happens when an aircraft breaks the sound barrier?
15
What is the reason for the poor low-speed characteristics of sweptback wings?
15
What are the limiting factors for high altitude planes (e.g: U2 or SR71) preventing them from going higher?
14
How does wing sweep increase aircraft stability?
See more linked questions

32
Why did the DC-3 have wing sweep?
5
What aerodynamic improvements allow variable geometry wings to be omitted on modern fighter aircraft?
1
Why do oblique-wing aircraft suffer from significant aerodynamic cross-coupling?
3
Why are winglets swept back and not front?
5
Is airflow deflected inwards or outwards by wing sweep?
3
Why do swept wings decrease the drag increase that occurs in transonic flows?
1
For jetliners, how is a swept wing justified over a thin wing?
6
Why does a Cessna 172 have dihedral wings if it has high wings?
3
Why is sweep angle measured at the 25% chord?