How to reduce altitude in a passenger jet without gaining forward speed in an emergency?

Assume the pilot is flying too fast and high for an emergency landing. What movement of the control surfaces must they apply to land the aircraft safely on the runway? I heard this type of manuever is also used in gliders and light aircraft

How to reduce altitude in a passenger jet

Normally most of the passenger jets have spoilers They are effective and can be deployed at any speed.

Now what happens in case you don't have spoilers for any reason. I was discussing the subject with a pilot many years ago and he told me the trick you mentioned: you apply rudder to one direction (I assume opposite to the engine rotation to avoid unpleasant surprises). That increases dramatically the forward surface of the plane against the relative air flow. That results in increased drag and thus speed loss.

But yaw causes roll (and vice versa). Also the wing of the side you are yawing to, has less lift because it is shaded from the forebody of the plane. This is where the aileron is needed. You need aileron to maintain lateral stability and prevent the aircraft from rolling. See the image bellow. The orange lines denote the area of increased drag by the fuselage. The green area is the "shaded" area of decreased lift of the wing. 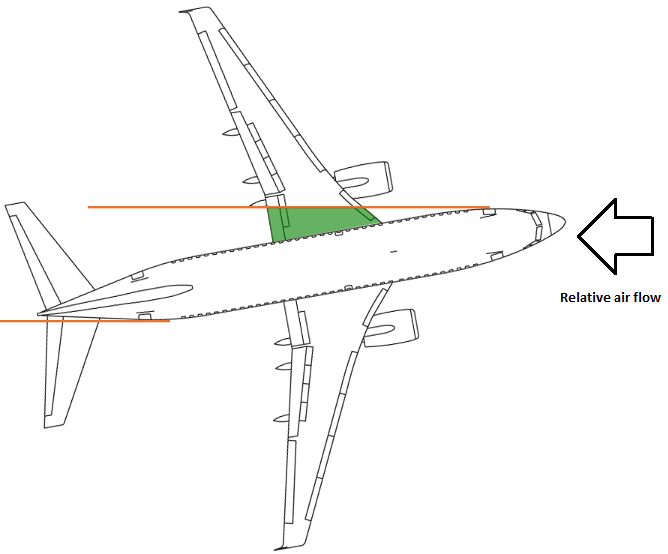 Top view from wikipedia. Derivative work by me.

According to that pilot, this is more effective than spoilers. But there is a trap: You need to be careful not to yaw the plane too much because the shaded wing will loose too much of its lift and will result in capsizing the plane.

EDIT: Finally, you mentioned emergency. There are different types of emergencies. Pressurization is an emergency situation but does not affect aircraft control (at least not directly). Hydraulics problems or engine loss is an emergency as well. But that will affect the way you will handle the aircraft. Here I cannot help you. A trained pilot perhaps can answer, though I believe that the answers will vary depending on each planes flight manual.

In addition to the standard aerodynamic controls - ailerons, rudder, elevator - many large aircraft also have a spoiler (also known as speed brake). This has the effect of adding drag without adding lift - in fact in some designs it will reduce lift. This allows a swift descent to be made without increasing airspeed. Gliders also have spoilers, as they only have one shot at a landing.

In the absence of a spoiler (or in addition to it) an aircraft can dump lift without increasing airspeed by carrying out a manouevre called a "forward slip". The ailerons are applied in one direction and the rudder in the opposite direction, meaning that the aircraft is actually moving at an angle to the direction the nose is pointing (see the answer by Stelios for a nice diagram). This adds drag and disrupts the aerodynamics of the wings. This was among the manouevres used in successfully landing the Gimli Glider.

In either case, just as in regular flight, forward speed and vertical speed can be manipulated together by using the elevator: lowering the nose increases both airspeed and descent rate.

Not the answer you're looking for? Browse other questions tagged landing commercial-aviation emergency ailerons rudder or ask your own question.

21
When can spoilers be used on airliners?
2
How fast can a large passenger jet descend and slow from cruise to emergency land?

44
When are aircraft required to dump fuel for emergency landings?
21
What are the risks in landing on a beach vs. shallow waters?
14
What would happen if a pilot were to use the parking brakes after touchdown in order to slow down?
15
What happens if an aircraft declares an emergency while there is another aircraft ahead cleared to land?
20
Is is possible to land a midsize commercial plane on an Ford Class aircraft carrier?
4
If a passenger steps in for the crew, are they eligible for a reward as in maritime law?
9
With helicopters, is normal landing or auto-rotation landing any different when landing on water?
9
What would be the best alternative during a dead-stick approach?
26
What does an absolute novice need to learn to make a successful emergency landing?
1
How much slipping and sliding go on during short final?