What are the different kinds of de-ice fluid?

When frost adheres to the airplane or it is snowing, you need to make sure the airplane is clean when you depart. You've probably seen the trucks spraying aircraft in the winter before departure, but what are the spraying it with?

I know of at least 4 types of de-/anti-ice fluids but perhaps there are others. What does each fluid consist of and what is its function? How do I know if these fluids are available at an airport I plan to operate from? Are there limits in how soon I must depart once fluid is applied?

Wikipedia contains a good summary of the different types of fluid:

The main component of deicing fluid is usually propylene glycol or ethylene glycol. Other ingredients vary depending on the manufacturer, but the exact composition of a particular brand of fluid is generally held as confidential proprietary information.

Call ahead to the airport to see what kind of deice/anti-ice fluid that they have because each one is different.

Every year, the FAA publishes tables which include information about how long the various deice fluids will provide protection under various weather conditions. Here is an example table: 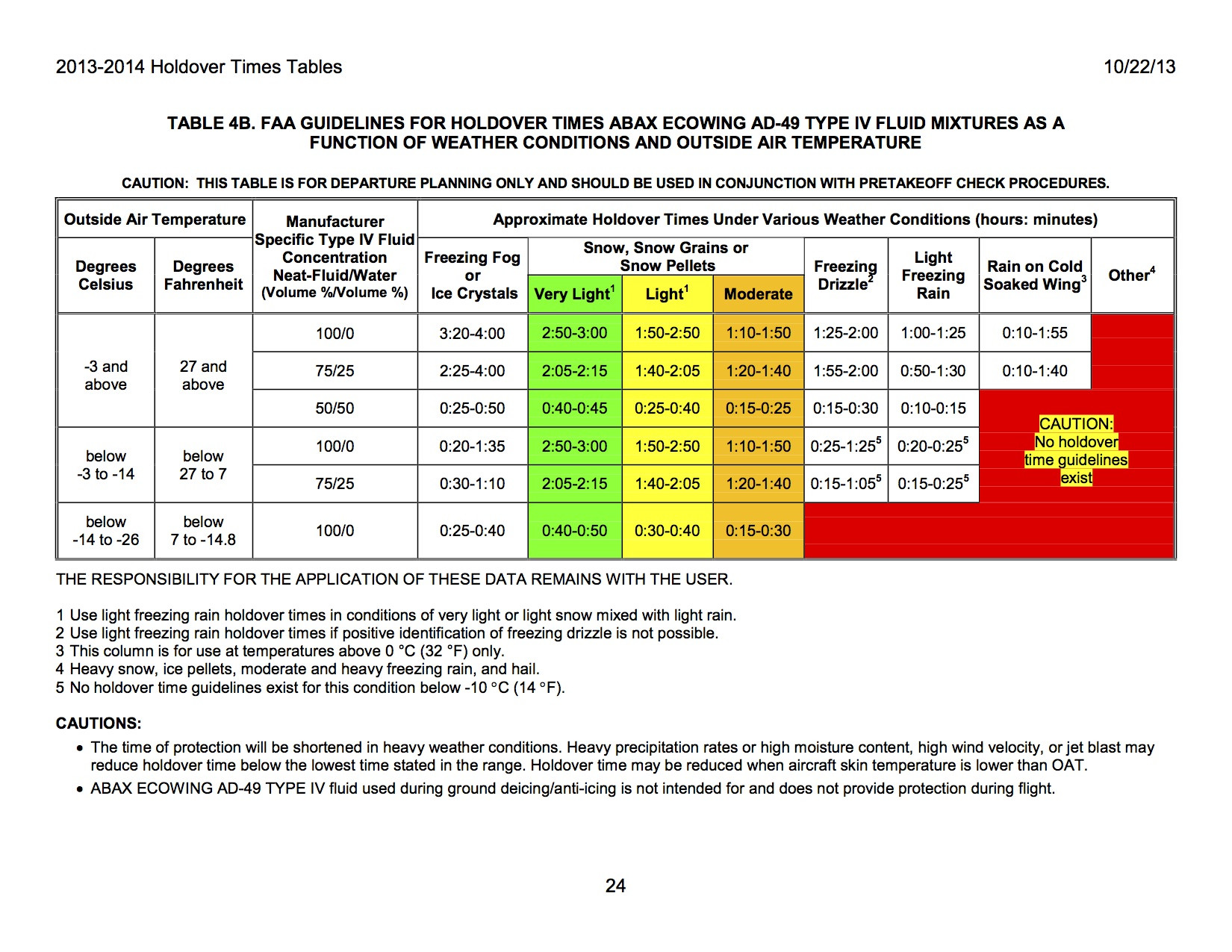 For this particular fluid (ABAX ECOWING AD-49 Type IV) we can lookup a specific example such as:

This shows that the fluid will provide protection for 1:40 to 2:05. If you are delayed longer than that, you will need to deice again. Since every part of the aircraft needs to be protected, the timing starts when they first start spraying the aircraft. Note that other types of fluid (particularly Type I fluids) have much shorter holdover times than this, so be careful and make sure that you check!

7
What is the difference between deice and anti-ice?
4
Do wing warmers exist?
1
What is the process to remove frost off an airliner?

8
What do they use to de-ice aircraft and runways on snowy days?
5
Why are CJ2+ Anti-Ice & De-Ice Systems separately controlled?
6
What were to happen if deicing fluid went in to the jet-engine?
7
What is the difference between deice and anti-ice?
3
What common forms of deice and anti-ice exist and what future alternatives are being researched?
5
What is the most critical takeoff shear margin condition for a Type IV anti-ice fluid?
4
What do the pilots do if the plane they are operating does not have an anti-ice system?
1
What are the conditions under which one would normally switch on the Engine and the Wing Anti Ice?
5
When and where are anti-ice required for supersonic flight?
1
Are pitot systems protected from ice?