What are Electro Hydraulic Servo Valves and Solenoid Operated Valves?

What is Electro Hydraulic Servo Valve (EHSV) and Solenoid Operated Valve (SOV)? Also what is the difference between these two valves?

A solenoid is an induction-based actuator. In its simplest form it is a magnetic rod inside a coil of wire. Run a current through the wire and you create a magnetic field that creates a force on the rod, moving it one direction or the other. The force with which this occurs is proportional to the current through the inductor (audio speakers use this exact same principle to make the cone vibrate).

A solenoid-operated valve usually functions as a simple gate; the solenoid mechanism pulls or pushes a simple flat valve allowing the fluid to pass through or not. It's technically possible, but not usually feasible, to use a solenoid as a variable valve; for it to be accurate would require very low friction so the current applied to the solenoid (and thus the force on the valve) could be varied to produce smooth variations in valve position.

Solenoid-operated valves are typically used as triggers for larger mechanisms, including the electrohydraulic servo valve.

An electrohydraulic servovalve uses electrical current to move a "flapper", similar to a solenoid. The flapper controls the flow of hydraulic fluid to one side or the other of a spool valve. That moves the spool valve, allowing the supply pressure to feed an actuator cylinder, moving it one way or the other. However, that same movement also allows hydraulic pressure to return up to the flapper, providing a countering hydraulic force to the electrical force that moved it, called "negative feedback". Eventually these forces balance, and the flapper re-centers, closing the spool valve. The net result is that the actuator cylinder has moved a certain set distance, proportional to the strength of the input current. 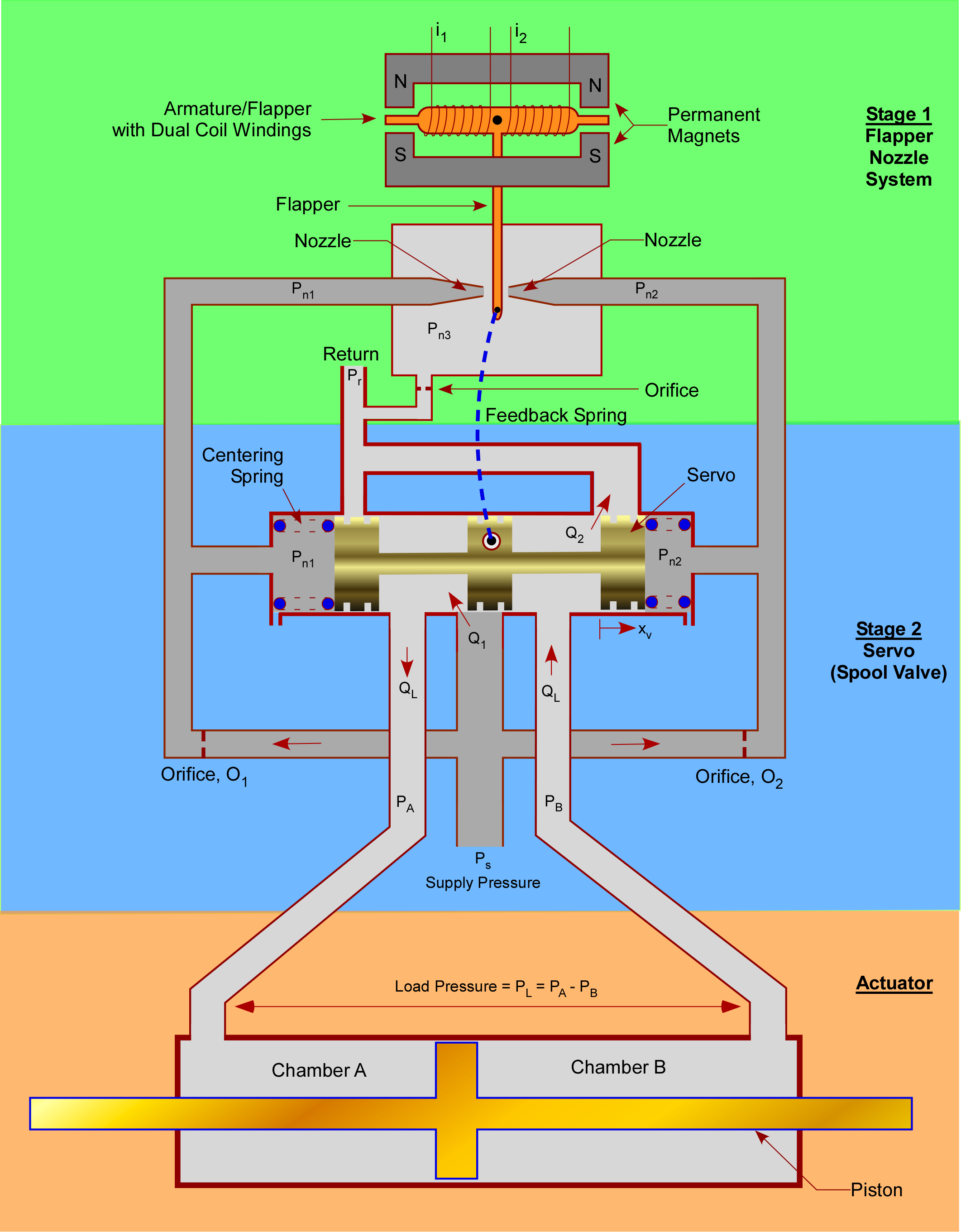 These valves are used to provide smooth, high-strength motion in a hydraulic system. This type of valve, for instance, can be used to move the control surfaces of a large airliner, without requiring high-pressure hydraulic lines or tensioned cables to link the hydraulic system to the yoke in the cockpit. Instead, the yoke (or sidestick) controls the current through electrical wires leading to the EHSVs. That link is much easier to maintain (and cheaper to build in the first place) than older systems on previous generations of aircraft.

Not the answer you're looking for? Browse other questions tagged aircraft-design flight-controls aircraft-maintenance or ask your own question.

3
How does hydraulic actuator servo valve feedback work?
0
Why don’t large aircraft (larger than ~737-size) have even partial manual-reversion capability?
2
Why didn’t the space shuttle have flight control manual-reversion capability?
3
Why was the 737 main rudder servo valve’s vulnerability to causing uncommanded reversals never discovered in testing?
3
Why don’t airliners use stabilizer movement to assist with large pitch control inputs?
29
Why is the most common hydraulic fluid so poisonous?
5
Where is the control loop of the actuator closed?
9
Are 737 pilots required to train in manual-reversion flight?
5
How are the 737’s elevator and aileron cables attached to their control tabs without impeding the control surfaces’ motion under hydraulic power?