Why don't we have yokes that look like steering wheels?

This question came across my mind when I was thinking about cockpit design vs car design: why don't we have yokes that look like steering wheels?

The first advantage I can think of is more gestures to hold the yoke. You can hold a steering wheel in many ways, e.g. 2 & 10 o'clock, 3 & 9 o'clock, top, bottom, one hand, both hands etc. And one can still pull or push the yoke even if it's circular.

Secondly, in most (if not all) of the yokes, full aileron deflection is achieved when the yoke is rotated approximately 90 degrees. Would it be beneficial if it's 180 degree instead, allowing more fine control?

We Do! It just has been a while since anyone has built a plane like that.

Many early planes did, notably the curtis biplane comes to mind 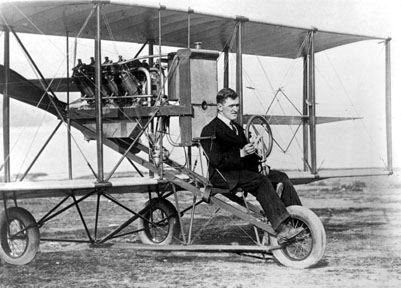 As closed cockpits came into be and the modern control set up we see something like a car wheel.

The cockpit of the Reliant SR-6A shows the love and skill that went into the restoration. 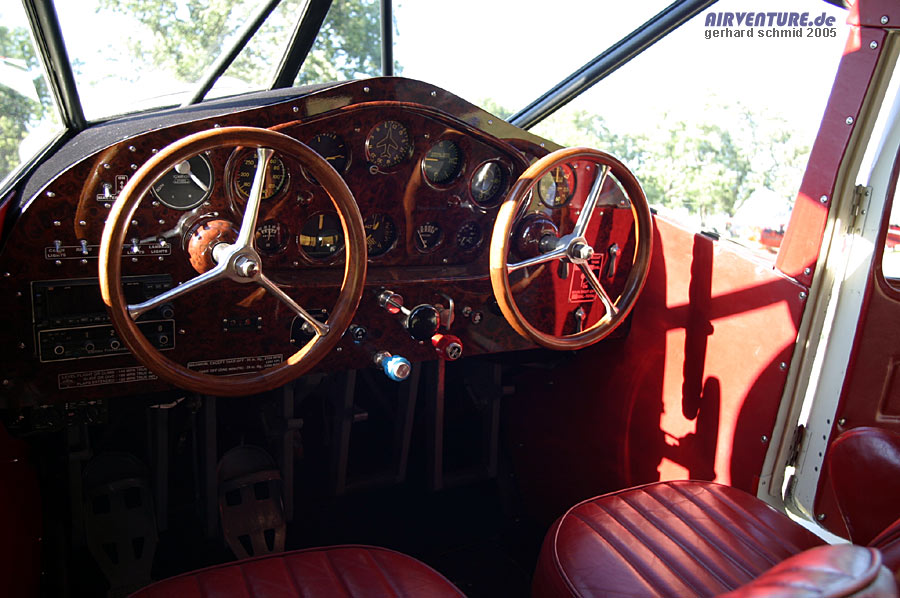 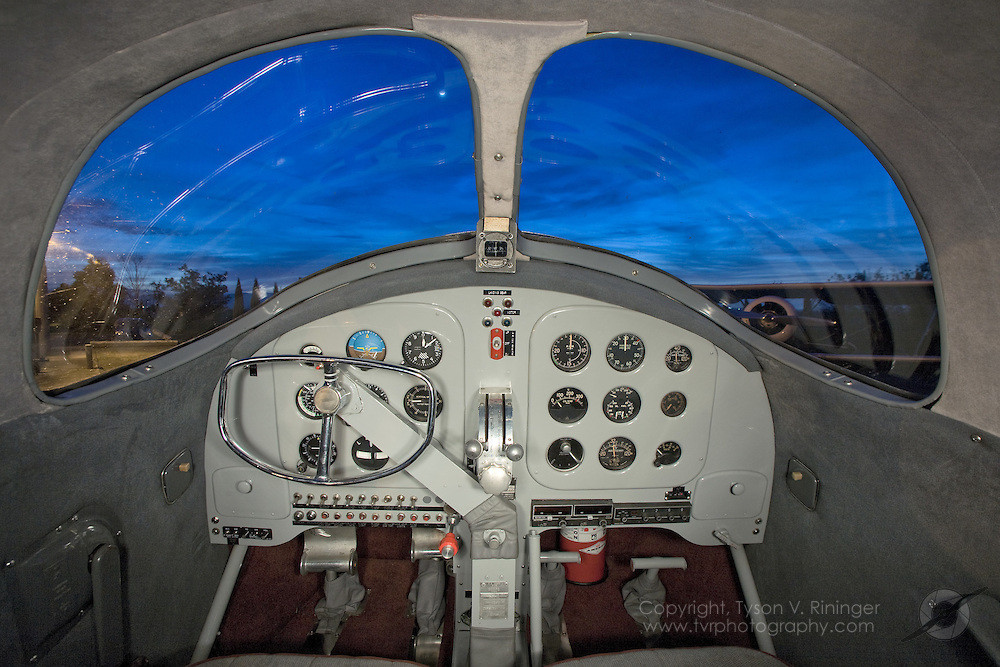 Even later than that the Ercoupe has a somewhat rounded control wheel. 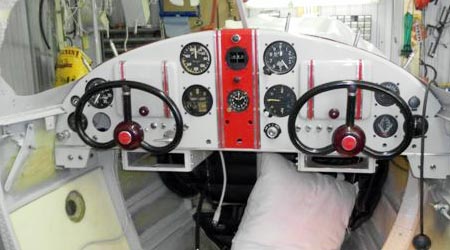 Also of note the Piper Pacer and Cessna 140 had rounded yokes. After that period most of the big makers moved to the yoke we know and love today. Piper would have a closed top yoke on their early Comanches through the early 60's as well. It should also be noted that early planes (wright flyer etc) had stick like controls. I would assume this was to allow the cable to be mounted far from the pivot for torque reasons although Im not sure (this was for sure before trim).

Remember in an airplane its all about weight so trimming it where ever you can is worth it.

In a plane the maximum deflection of a yoke is often no more than 90 degrees so having a full wheel (which allows a hand over hand car style turn) is not necessary.

Orientation is a bit of a concern when flying on instruments but many race cars have center marks on their steering wheels for a similar reason.

For what its worth formula 1 steering wheels see about as much travel as a yoke and are similarly shaped. Some even have more buttons than a cockpit. 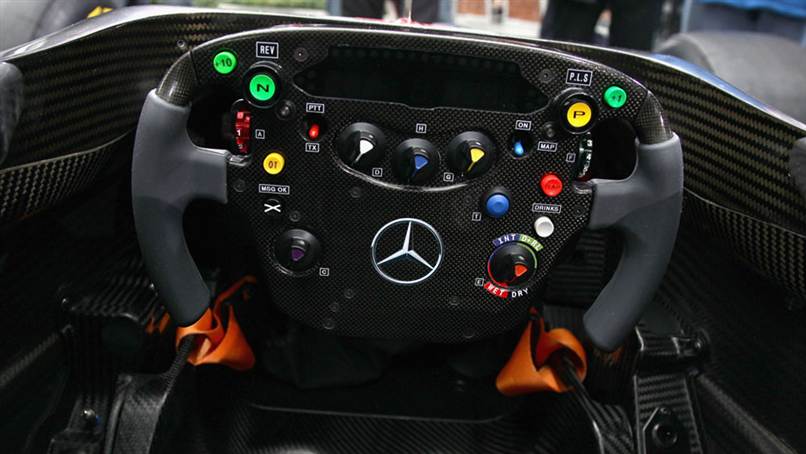 With a steering wheel in a car, the driver can judge how far it is rotated without looking at it by at least three means.

In a car, the driver:

In a plane, the pilot:

The yoke's shape is valuable because it easily informs the pilot of the yoke's rotation with high precision.

Short answer: Because you only use one hand on the yoke.

Longer answer: In an airplane, you almost always fly with only one hand on the yoke (or none, as the case may be.) You will be using your other hand for power adjustments, setting flaps, adjusting radios, setting instruments, writing, etc.

In a car, power is adjusted with your feet, so you don't need your second hand for power adjustments and there aren't really any other particularly critical controls that need to be manipulated frequently or precisely. However, in an airplane, you have to be able to precisely control three axes of rotation, not just one like in a car. As such, your feet are needed for yaw control (and differential braking,) which means power must instead be controlled by hand. So, there's no need for the various grip positions that you could use with a wheel because you don't want your second hand on the yoke in the first place.

Additionally, having a 90-degree angle (or nearly so, as the case may be) allows for a better grip than the smooth curve of a steering wheel. You can place 2 or 3 fingers above the horizontal bar and the others below, which prevents your hand from slipping up or down the control wheel, as is possible with a normal car steering wheel.

As far as the second question of whether it would be better to have 180 degrees equal full deflection, that would mean you would either need 2 hands on the yoke in order to command full deflection, which is not good for the reasons already mentioned, or have a weaker grip on the yoke that would allow you to rotate it 180 degrees either direction. If you have a firm grip on the yoke, your wrist will simply not be able to rotate enough to turn it upside down without releasing your grip.

It's also important to note the difference here between what the yoke controls versus what a car steering wheel controls. A car steering wheel directly controls your turn rate. Thus, a car whose steering wheel is in the neutral position will not be turning. In an airplane, however, your current bank angle controls your turn rate. An aileron deflection changes your bank angle. Having the ailerons in the neutral position will not cause you to fly straight forwards, but rather will simply leave your bank angle (and thus your turn rate) at its present value (if we ignore the effects of dihedral and such.) Thus, you don't need as much possible input control range to get precise turn rate control.

Steering wheels were developed for cars to provide the large amount of leverage necessary to turn the wheels of a car without any power assist.

In planes, you don't need that much leverage (ok maybe in some long-wing aircraft) to control the elevator and ailerons, and the stick is mostly centered, even in turns.

The idiom for fine control of the yoke is to "milk the mouse", and use two, maybe, three fingers so as not to overcontrol.

31
In the early days of flight, were there any cockpit control schemes other than the modern one?
18
Why does the yoke "stick" in a turning position?

18
Why don't airplanes have smoking cabins?
15
Why don't airlines have in-flight video recordings like buses do?
7
Why don't big airliners have bigger doors?
13
Why do some military jets have needle-like structures at the nose and others don't?
5
Why don't airliners have bigger cockpit windows?
22
Why do some A380 main wheels have no brakes?
5
Do airliners use light alloy wheels, like cars do?
3
Why are the Convair 880's yokes shaped differently from each other?
4
Why do some helicopters have wheels instead of skids?
3
Why don't the noses have the same de-icing metal surface like that of the wing's leading edge, engines, tail, etc.?