What exactly is VMO and how does it affect a plane when it is exceeded?

I read an article that mentioned "VMO" speeds of a 747 and that the plane, when it exceeds its VMO, shakes uncontrollably and destroys itself.

I've never heard of planes doing this and the article explained VMO in a way that is beyond my understanding.

For someone that doesn't know much about aviation:

What does VMO stand for and how does it affect planes when exceeded? If it does cause the plane to shake to the point that it destroys itself, why is that?

$V_{MO}$ is a “maximum operating speed”. It is one of many “V-speeds” defined for an aircraft that limit operation at various flight phases. All V-speeds are indicated airspeeds¹.

The $V_{MO}$ is the maximum permitted speed for the aircraft. This includes a safety margin, so pilots can reasonably fly near that speed. Exceeding it is not immediately dangerous, but as it reduces safety margins, is an incident that should be investigated.

There is another speed, $V_{NE}$, the “never exceed speed”, which is somewhat higher and which marks the point where things start to get dangerous. When the aircraft exceeds $V_{NE}$, aeroelastic flutter may develop that will destroy the aircraft and/or important parts may break off as the dynamic pressure becomes higher than what they are designed for.

Also these speeds have their Mach number counterparts², $M_{MO}$ and $M_{NE}$. At high altitude, the same indicated airspeed (IAS) corresponds to much higher true air-speed, since indicated airspeed decreases with pressure, while the same Mach number corresponds to slightly lower true air-speed, since speed of sound only depends on temperature. So at high altitudes, the Mach limits are reached first while at low altitudes the IAS limits are.

Exceeding the $M_{NE}$ has different effect, though also dangerous. Above that speed flow separation occurs above the wing due to supersonic speed of the flow. This leads to loss of lift and significant down-pitching moment (a.k.a mach tuck), which aircraft not designed for supersonic flight may not have enough elevator authority to compensate.

¹ The airspeeds are given as IAS, the speed measured by pitot probes, so they can be directly compared to the indication in cockpit (aircraft with EFIS (“glass cockpit”) usually correct those measurement errors that can be estimated, showing so called calibrated airspeed (CAS)). However it may not be just a simple number but may be tabulated depending on other parameters.

In particular $V_{NE}$ and $V_{MO}$ may depend on altitude, because flutter depends on true airspeed (TAS) and at lower density (due to lower pressure at altitude) the same TAS corresponds to lower EAS/CAS/IAS.

² Mach number is true airspeed as fraction of speed of sound. In this case the limiting factor is formation of shockwaves due to the flow speed locally exceeding speed of sound around some parts of the aircraft.

Vne is defined in terms of True Airspeed (TAS), while all other V speeds are Indicated airspeed (IAS).

Gliders are particularly susceptible to the aerodynamic issues that define Vne because they fly at high altitudes and have long wings.

Since determining true airspeed in the cockpit would require a calculation, gliders have tables in their flight manuals and placards in the cockpit that show Vne in indicated airspeed at various altitudes. 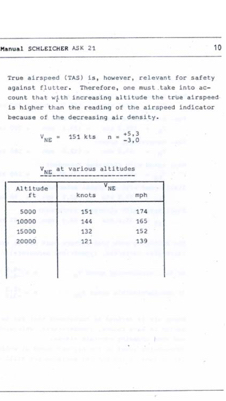 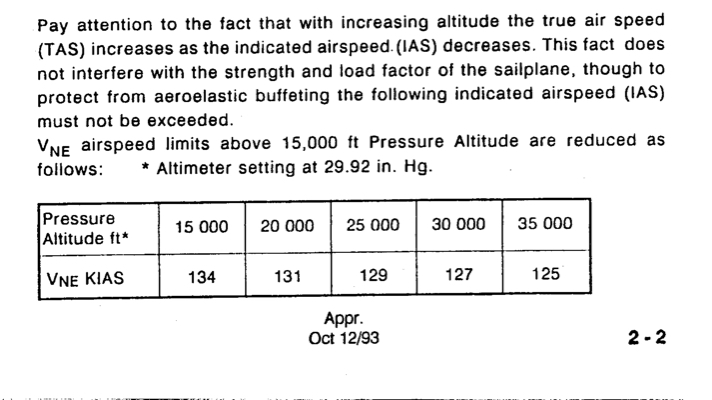 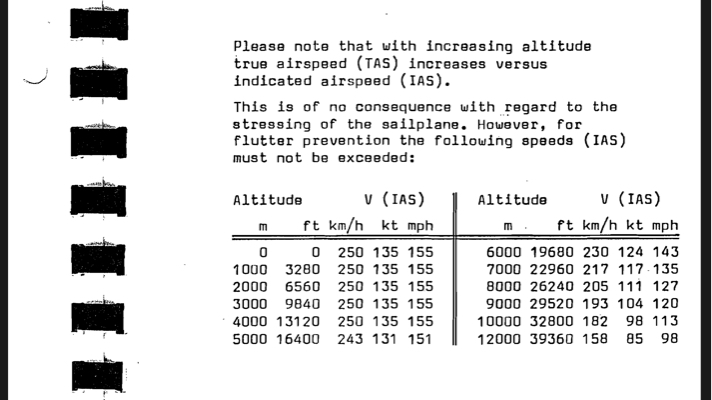 There have been several incidents where a Boeing 747-SP, B747-100, B747-200, and B747-400 have exceeded not only Vmo, Mmo, and the Vne speeds and still survived, not “shaking itself to pieces.” These aircraft were damaged, of course, but there hasn’t been a case of the B747 aircraft ever being lost due to a catastrophic in-flight breakup due to the excursion of exceeding the Vmo, Mmo, and/or Vne speed/Mach numbers.

Not the answer you're looking for? Browse other questions tagged v-speeds or ask your own question.

12
What protection does Vno provide?
5
Which maneuvering speeds are included in the TCDS?

5
When does the overspeed alarm goes off in a plane?
7
How does an inoperative Anti-Skid affect V speeds?