While looking over a tutorial on how to operate the Garmin GNS430, I couldn't find any info on how the device would report a degraded or low accuracy signal. What are the accuracy requirements for aviation GPS navigation systems and how are they required to alert a user in the case of a reduced accuracy situation?

I'm not specifically asking about RAIM here, as I believe that is mostly designed to identify a malfunctioning satellite or compromised signal. An example scenario would be some atmospheric condition that reduces positional accuracy to 1/4 mile or less.

The required GPS accuracy depends mainly on the application. En-route requirements are more lenient than the accuracy requirements for non precision approaches.

The GPS accuracy is the result of inaccuracies in the signal combined with a factor based on the geometry of the satellites. Within the receiver the position error is thus estimated by looking at 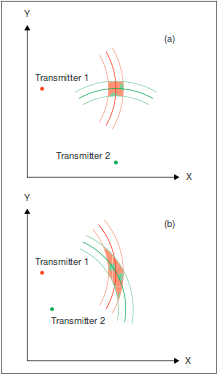 The DOP can be split up in three components, the horizontal (HDOP), the vertical (VDOP) and the time (TDOP). For horizontal position accuracy HDOP is used.

The second factor in the accuracy estimation is the User Equivalent Ranging Error (UERE). In the illustration above, this is the width of ranging bands. UERE is composed of various factors:

The effect of the ephemeris data error is in the order of 2 meters (standard deviation).

The accuracy of the satellite clock used to be intentionally degraded under the Selective Availability programme. SA was turned of in May 2000, drastically improving the GPS accuracy. Receivers developed before that date are unaware of this change and will estimate a worse accuracy than they actually achieve. 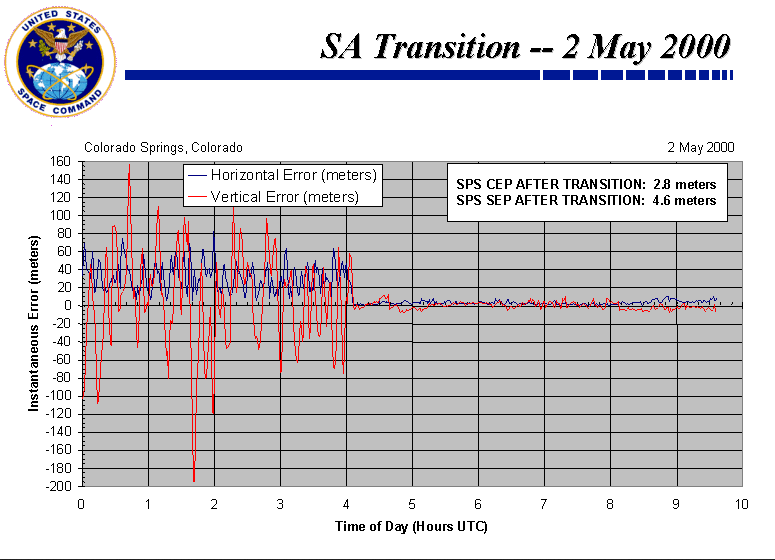 . The residual clock error after SA was turned of is equivalent to about 2.5 meters (standard deviation).

The GPS signal includes parameters for an ionospheric model which can be used to correct ionospheric effects. The residual error cause by signal delay in the ionosphere is in the order of 5 meter (standard deviation). It is the most significant contribution to the UERE.

Multipath effects (caused by reflections of signals) are very much depending on the environment. In a city the effects are worse than in the air. For airborne applications multipath can be cause by reflections of the signal from the wings. The effect is very limited. On the airport surface there can be significant effects especially near buildings.

Receiver errors caused by unstable oscillators (thermal noise), quantization and rounding errors, software errors etc. This contribution can be reduced by improving the design of the antenna and receiver; which all comes at cost. Let's estimate the contributions to UERE about 3 meters.

The UERE is the root mean square of all these contributions.

The 95% accuracy is then estimated by $2\times{UERE}\times{HDOP}$. For a HDOP of $2$, the position would be estimated to be within 27 meters 95% of the time. Typical accuracy is better, because the UERE factors are estimated quite conservatively.

Augmentation systems such as WAAS and GBAS can improve the GPS accuracy by sending correction signals. The GNS 430 (without the 'W') does not use these signals.

If the DOP is greater than $4$, the GNS 430 will display a message "Degraded accuracy". You can find the DOP on the Satellite status page. This page also shows the estimated position error.

Note that all the calculations to estimate the position error assume that GPS is working as it should, i.e. a fault free condition. Faults can occur in the satellites, in the transmission of data to the receiver and in the receiver itself. Fault detection is part of the RAIM function.

Not the answer you're looking for? Browse other questions tagged avionics gnss or ask your own question.

8
How is GPS RAIM availability calculated?
5
Why does Boeing 737 use 2 Inertial Reference Systems (IRS) and GPS?
5
How does Kalman filtering work in inertial navigation systems?
4
How to leverage Lynx NGT-9000's integrated GPS/WAAS?
3
Why do Computer Navigation Fixes still exist now that GPS waypoints can be used to define tracks?
6
Does the altitude or attitude of an aircraft affect GPS accuracy?
5
Why would a Mode-C transponder report a different altitude than an altimeter/GPS?
3
What did Fiji have to do when it incorporated GPS into its aviation system?
2
What navigation systems were used by the Space Shuttle during reentry?
2
Are helicopter pilots required to use GPS navigation?