If the landing gear is stuck in an airliner, can the crew go down and manually open it?

There are several instances where we see the landing gear getting stuck before landing. In these kind of situations, can the crew, or one of the pilots, go down to the landing gear area and solve the issue?

On older (WWII-era) large planes, the crew had access to a manual crank to lower the gear if the automatic extension/retraction system (usually a linear actuator powered electrically) failed. I don't know of any that had a gravity-based manual system; I'm sure a few bomber crews would have appreciated something like that after having to crank the handle to get a disabled main gear locked. Here are the manual crank ports for the B-17, on the forward bomb bay bulkhead with red arrows indicating the direction to crank: 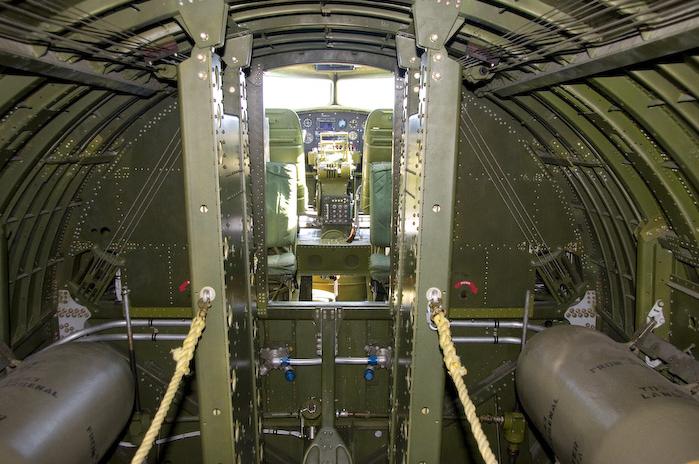 The B-17 had a retractable tail gear as well, so there was a third manual crank in the tunnel to the rear gunner's position (but if there were multiple gear failures, the main gear would be the priority).

On more modern airliners with hydraulic extension/retraction, manually cranking the gear into place isn't as much of an option (especially since any access to a crank linkage would be in either the passenger cabin or the cargo hold). For these aircraft, the gear are designed with a "manual extension" or "gravity release". This basically disconnects the gear strut from its uplocks and the hydraulic cylinder, allowing gravity to pull the gear down and then momentum (or a spring mechanism) will engage the downlocks. Here is a diagram of the 737's manual gear panel on the right-hand wall of the flight deck: 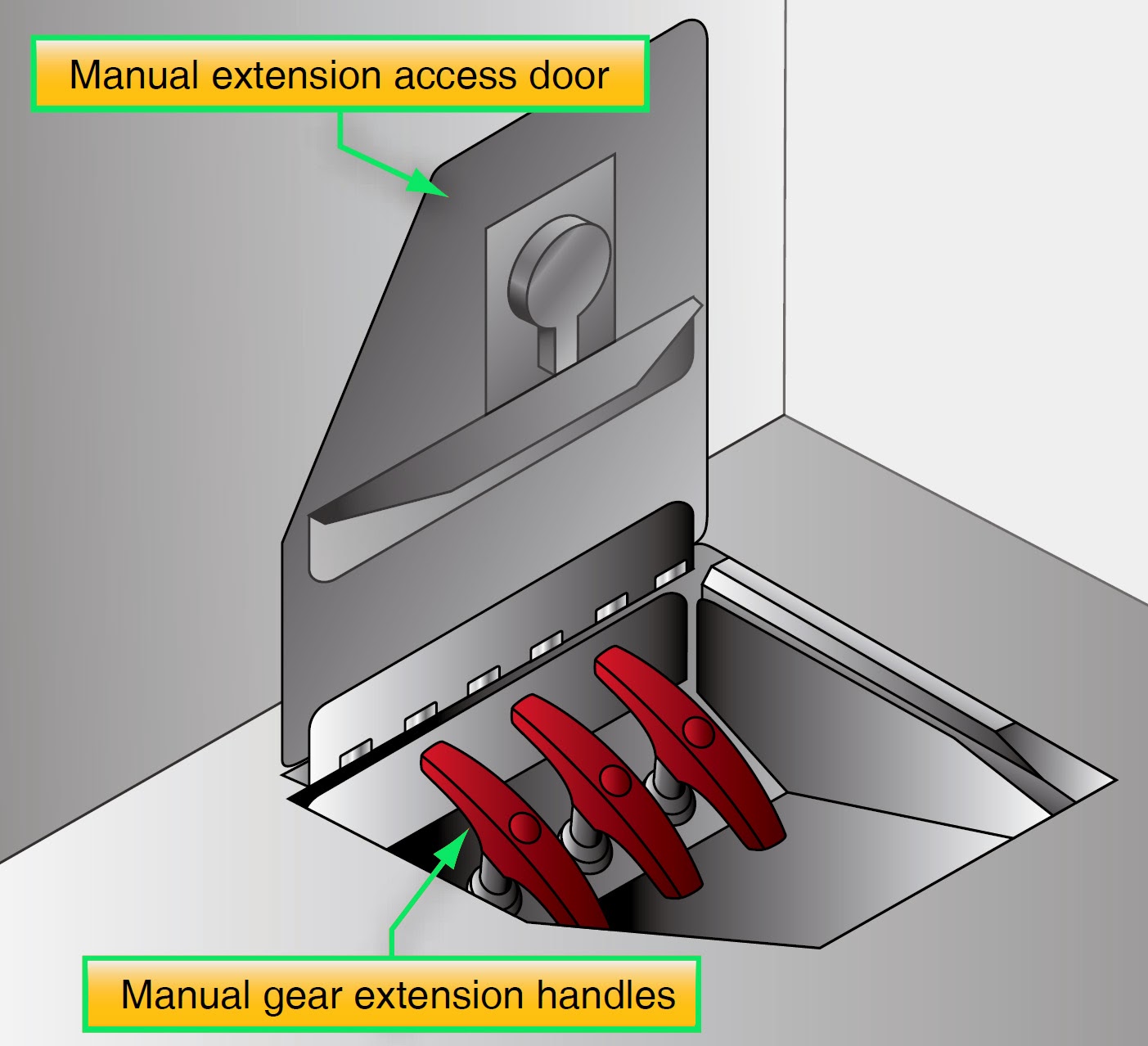 The 747 has a manual nose gear extension system in the avionics compartment below the first-class cabin. The 747's main gear are much more complex, but it is still possible to let gravity pull them into place, by using a set of "alternate gear extension" switches on the overhead panel to release each gear from the hydraulics and uplocks: 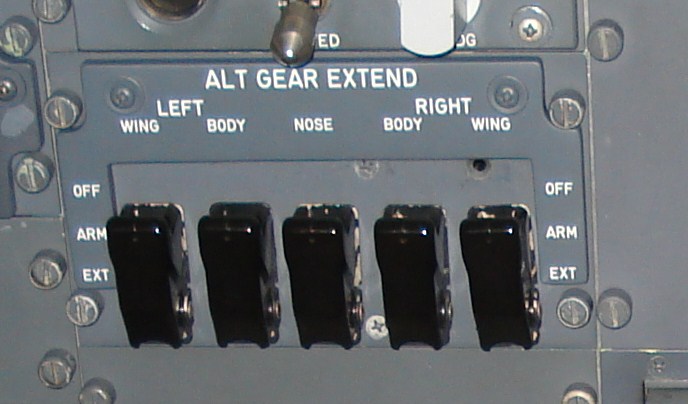 It doesn't always work; a Virgin Atlantic 747 pilot was forced to make an emergency landing with the outboard right main gear stuck in a half-extended position: 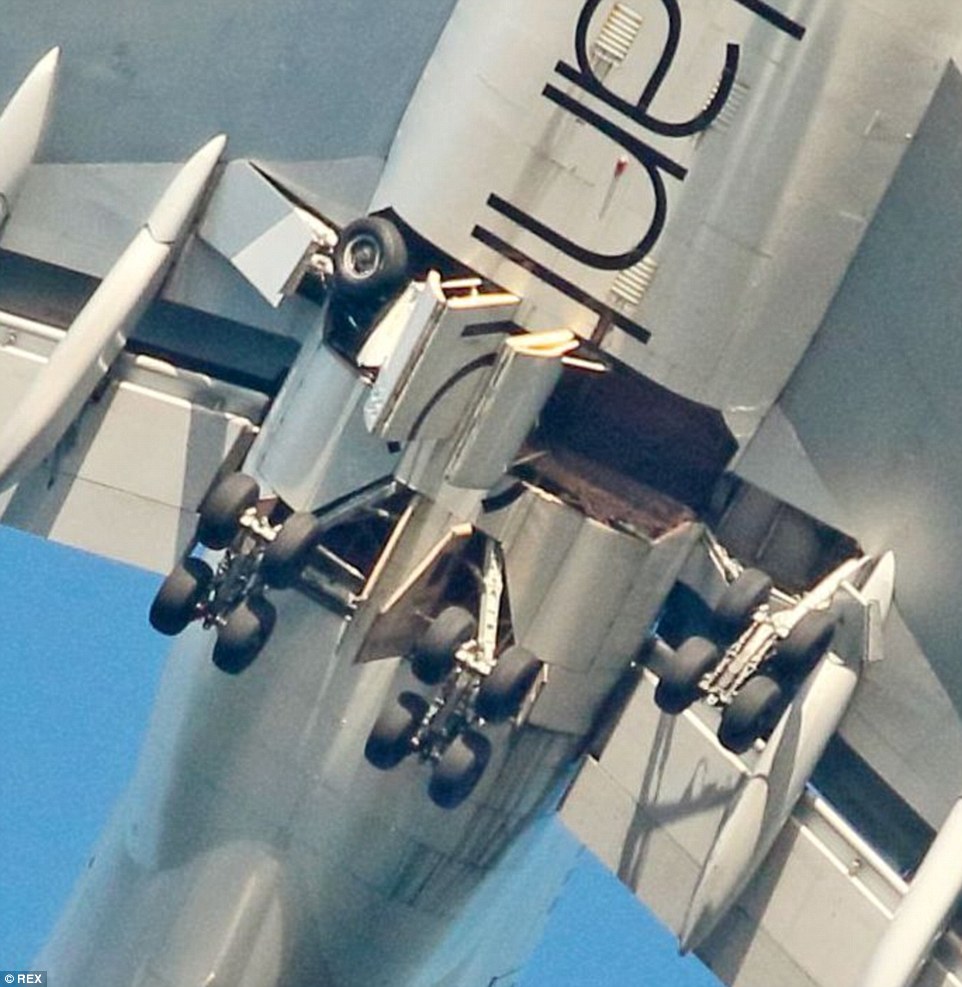 I don't think any aircraft has access door from inside to the main wheel well. Some aircraft do have access hatch via the nose wheel well, but since the wheel well is unpressurised and the cabin is pressurised, it would not be possible to open the hatch in flight and even if it was possible (after depressurising the aircraft at low altitude), trying to do anything there with the gear door open (which it would have to be obviously) would be extremely dangerous and the chance of success would not be big, because a man has much less strength than the hydraulics that already tried to get the gear out and failed.

Any aircraft with retractable landing gear is required to have an alternate extension mechanism that can be used to extend it if the primary system operating the gear fails, which was already well explained by KeithS. But when that also fails, there is no way to access the gear to attempt to unjam it.

Aircraft are designed with all sorts of emergencies in mind and even landing with partial gear is not a big deal. Sure, it will do some damage to the plane, possibly even to the point that it's not economical to try to fix it, but that's what insurance is for, and risk of injury is minimal. For recent examples of gear mishaps see:

All occupants of those aircraft were OK, only 3 minor injuries in one of them from the evacuation.

Also in some cases the gear fails when the aircraft touches down, so nobody could do anything about it, because there is no indication it's going to happen beforehand. If it's just that, the risk of injury is still small. Example:

which also ended without injury.

Not the answer you're looking for? Browse other questions tagged airliner emergency landing-gear or ask your own question.

9
Will the landing gear work mechanically in case of total power loss?
14
Why did some aircraft use hand-crank instead of gravity for alternate gear extension?
11
Can the Landing gear be lowered when system A hydraulic pressure is lost in Boeing 737?
1
How do aviation engineers ensure that the landing gear opens every time, without fail?

8
How many miles before the runway should an airliner put the gear down?
24
Why burn fuel at departure airport instead of flying to destination before emergency landing due to deflated tire?
20
Why is the nose landing gear of a Rutan Vari Eze up during parking?
20
Is it better to shut down the engine(s) or leave it (them) running when a gear up landing is imminent?
8
Should an emergency field landing be performed with landing gear down or up?
3
Why is the landing gear lever not set to OFF on the ground?