Could you ever legally authorize yourself to fly an aircraft that would require an LOA, based on your other certs?

The question about being certified to fly aircraft that don't fall under a type rating got me thinking. For all knowledge possessed by humans there must be a source. If you want to get certified on a Bombardier CRJ narrow-body, you have to be trained by someone who has not only also been rated to fly it, but certified to train on it.

This process is inherently iterative; someone trained your trainer, and someone else trained your trainer's trainer, and so on until at least a time when there were no aircraft of that specific model. At some point, someone got their approval to fly and teach that model without a single hour of stick time in that specific model of aircraft, because it simply didn't exist.

For aircraft like a Bombardier, the alternate training avenues are obvious; the manufacturer, located in a staunch U.S.-allied nation, will produce training materials and at least fixed cockpit sims, which when coupled with flight time in some other narrow-body T-tail jet, will serve as the basis for certification to fly and ultimately train others on any new Bombardier model. However, this gets tricky when you consider models of aircraft not falling into FAA-defined types, especially single-seaters, and definitely the first one or two of these aircraft to enter civilian hands. Vintage ex-mil planes, especially from non-Allied countries, are the primary example; how did the first civilian Zero owner get certified to fly it?

One possibility I thought of for how this could come about is based on the fact that there are a number of pilots/instructors with an extraordinary number of ratings. The current record, IIRC, is over 100 type ratings and/or specific aircraft model certifications. At some point, more training for a pilot like this on any specific airframe becomes redundant; there's nothing the pilot can learn from a CFI that a combination of the pilot's own experience on comparable models and whatever training materials exist for the airframe could provide. A pilot like this would be an obvious choice to take the first flight in some new plane, unique in the U.S. civvie world, but technically he'd still need authorization to do so.

So the question is, is there ever a "tipping point" where a pilot can legally use some combination of his existing qualifications to assert by himself that he has the required knowledge and skill to fly a first-of-its-model plane, for which he does not have an LOA and could not get one through normal channels?

One possible example. Say it's 1992. The Soviet Union has just broken up and the Red Army's military hardware is being auctioned off to the highest bidder. A collector and flight enthusiast in the U.S., who already owns and flies some ex-mil jets like the F-86 Sabre, heads overseas and buys himself an old MiG-17 from the USSR reserve forces in flyable condition; the first one ever to be in private American hands.

Now, how does he get certified to fly it within FAA-controlled airspace? Does he have to find a former Soviet pilot who can train him, and somehow transfer that Soviet pilot's voucher into an FAA LOA? Is there some high level of instructor certification that allows a CFI to train on airframes the CFI himself is seeing for the first time?

Or, can the collector himself, given his existing LOAs for closely comparable aircraft including his own Sabre, assert that he is capable of flying the MiG-17 and do so without anyone else having to vouch for that ability?

The only thing I can think of besides the pilot just saying "someone's gotta be the first to learn to fly this thing, and it might as well be me", is for the FAA to say exactly the same thing, and directly issue some sort of special provisional authorization for the collector to learn the aircraft for himself, hands-on, no CFI. This authorization would naturally contain all sorts of restrictions on when/where he could fly it (if I were the FAA watching someone learn to fly a military jet, I'd point him to the nearest MOA), until he could somehow demonstrate to someone that he'd attained mastery of the airframe and have most or all of the restrictions lifted with an LOA. The specifics of how all this would happen, though, escape me.

The answer to this, at least for planes that sport big, whirly props, lies next door to the FSIMS, in FAA Order 8900.2, the "General Aviation Airman Designee Handbook".

Non-type-certificated turbojet aircraft follow the 8900.1 checkout procedures -- a temporary LOA would be issued as Lnafziger pointed out, usually with an EPE (Experimental Pilot Examiner) or NDPE (yes, some of the NDPEs can check you out in jets too) giving you the final "checkride", based on their qualification in similar types of aircraft (for instance, if you hauled a Su-30MK home from the Sukhoi factory, you'd probably have an ex-F-15 pilot or the likes checking you out on the type).

Of course, if it's a UFO (aka something that is not of any extant category or class), then AFS-800 would probably have to step in and send or designate someone.

The original question which you linked to contains a link to the FAA Inspectors Handbook, which covers this scenario as well:

Mark Clark, the owner of Courtesy Aircraft, has the following pilot certificate, which allows him to fly anything. 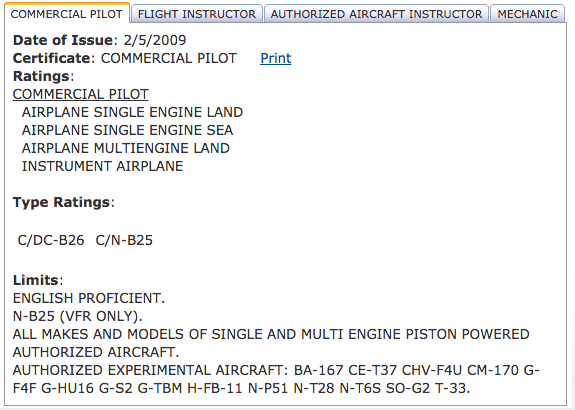 Not the answer you're looking for? Browse other questions tagged pilot-certification or ask your own question.

10
How is a type rating administered for aircraft that do not comply with 91.109?

7
What is required for a pilot to fly in another country?
12
Can a pilot with an ICAO Multi-Crew Pilot License fly an airliner into the U.S.?
8
How would you get certified for the AgustaWestland AW609 as a rotorcraft pilot or without any previous certification?
12
How can I build the 40 hours instrument time required for an instrument rating?
9
Can you fly an airliner without an ATPL?
6
How do I get certified to fly under FAA 333?
8
Will the new airmen certification standards make it more difficult to add ratings?
6
Can a MEI CFI give a valid flight review in a plane for which he is not endorsed?
7
If I buy my own aircraft in which to earn my PPL, does my instructor need to be certified to fly the type of aircraft I own/am training in?
15
Are test pilots certified to fly all aircraft types?