What is the cost savings of using electronic motors to taxi?

Aircraft manufacturers are now planning to use High Torque electric motors on the nose wheel of the aircraft, which is powered from the APU, to taxi the aircraft from the gate to the runway without using its main engines. This is intended to reduce the fuel consumption by the plane while being taxied using the main engines, but also adds additional 150 kgs approximately to the weight of the aircraft.

How much fuel savings are we talking about here? Lets say we are considering an A320?

Jet engines are not very efficient at low power and speeds, so using an alternative method of propulsion is a good opportunity to save fuel.

An aircraft the size of an A320 will probably burn about 200 kg of fuel during taxi (based on this and this). Assuming fuel costs \$3 per gallon, this is about \$200 per flight.

The cost of the added weight from the electric motor will vary based on flight length, but assuming \$0.05 per pound, the extra cost would be \$16.50. Of course you are saving 200 kg of fuel, so this also helps to offset the weight. The electric motor is powered by the APU which uses much less fuel than the engines.

As KeithS points out, this adds up quickly. Even if United Airlines only equips its 150 A320 series planes with this equipment (which would certainly be a large upfront cost), and those planes make 5 flights each per day, that adds up to \$150,000 in savings every day. This will of course depend on fuel prices, which are actually well under $3/gal at the moment.

A simple way to save some fuel while taxiing is to only use 1 engine (or 2, for four engine planes) to taxi. This doesn't save as much fuel as the electric option, but also has much less upfront cost.

There are savings beyond just fuel when using a electric taxi motor on a commercial aircraft. Your title seems to ask about this but the text asks only about fuel. WheelTug, a developer of an electric taxi system, answers both in a pretty thorough presentation.

Direct cost savings per flight is about 210 dollars, most of which is avoidance of pushback tug cost. Only about 80 dollars is taxi fuel, which then has to be reduced by 10 dollars per flight in "tankering", the extra fuel burned to carry the 300lb of electric motors throughout the flight. Net fuel savings is 70 dollars per flight. 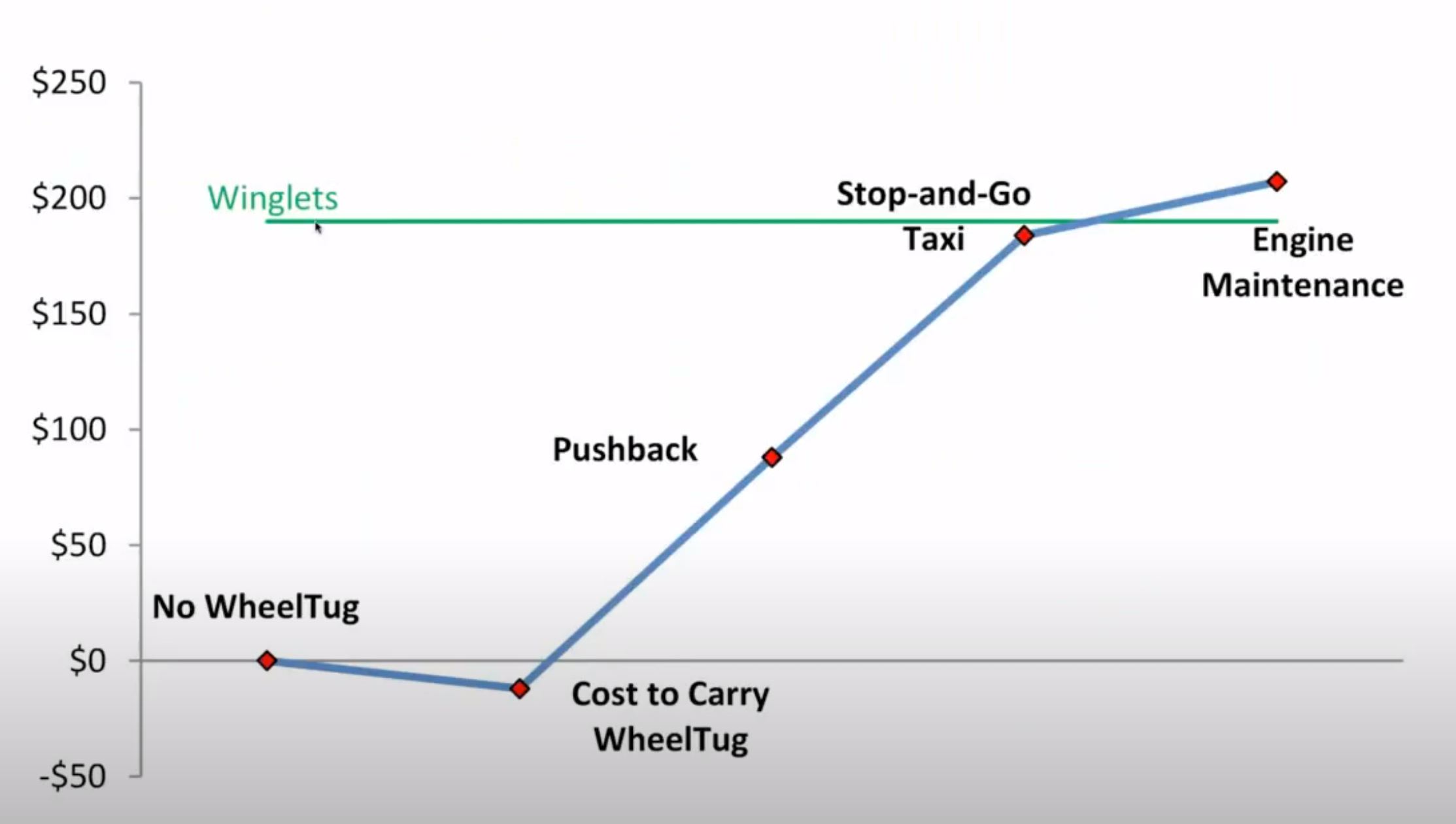 Much larger savings accrue indirectly through time savings. This includes financing cost of aircraft, increased utilization, reduced injury and damage, avoidance of cost due to delay and the like. It puts this number at about 550 dollars per flight. This makes the total savings 700 dollars per flight, according to WheelTug. 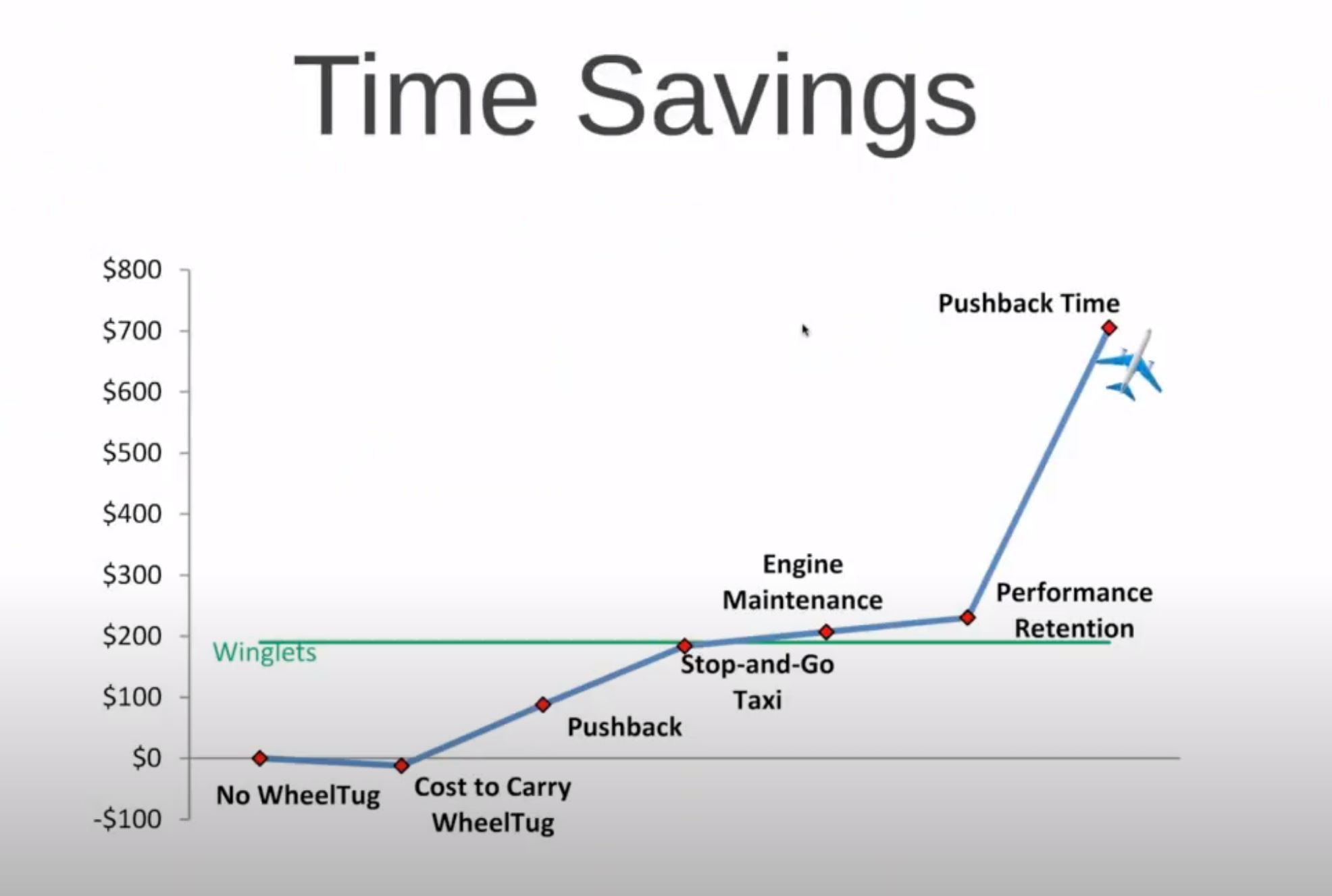 Not the answer you're looking for? Browse other questions tagged aircraft-design fuel taxiing efficiency or ask your own question.

-1
When aircraft rolls across airport field, uses its main engines or any kind of chassis gears?
16
How does an aircraft taxi?
11
Is starting a jet engine without ground support possible?
18
Are there any aircraft with powered landing gear?
8
Why don't large commercial airplanes have electric motors in the wheels?
0
How do plane landing-gear tyres roll before take off?

31
What is the maximum taxi speed and who defines it?
0
What is engine-out taxi out time?
13
Are zero visibility landings a possibility for the future of commercial aviation?
11
Is starting a jet engine without ground support possible?
23
Why do piston engines in aircraft burn fuel at a higher rate than a comparable car engine?
35
Do the wheels of taxi-capable helicopters have power?
7
Why not tow aircraft instead of single-engine taxi?
13
Can the plane Celera 500L be eight times more fuel efficient than a jet of similar size and capacity?