Can a free-falling aircraft with no horizontal (or minimal horizontal velocity) start up and fly to safety?

Inspired by this Grand Theft Auto gif, an aircraft with its engines initially idling is dropped from a high altitude (such as from the top of a building) with no or minimal horizontal velocity. Can it successfully throttle up and fly to safety? How about for

Rather obviously, both of these situations are far from likely to occur. As a result, the following is just idle (but hopefully informed!) speculation — I don't recommend experiments!

Of course, you’ll be pointing nose down at the ground, accelerating, and needing to do something about it — which will take time, and, more importantly distance. But, in the grand scheme of sky-scrapers, mountains and cliffs, 16.2 m isn’t that high. Incidentally, for this reason, bungee launching is a traditional method of getting gliders airborne in parts of the world with big hills — a team of runners using glorified elastic bands shoot brave pilots into the blue yonder, as illustrated by the picture below (at the Long Mynd). 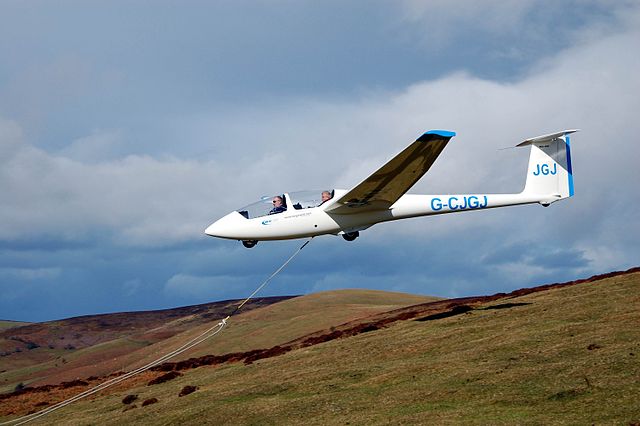 So, given that a hill is enough height for a sailplane to take off, possibly for a few hours on a good day, I’m reasonably sure that something like the John Hancock Centre would provide more than enough time for a pilot to recover from an odd attitude, loop forward to a nose-down dive, recover smoothly from it, and fly away (from the big building behind him).

The gif you linked to featured what looked a lot like a small private jet. I defer to the others on this site with a lot more turbofan experience than I, but I’ll just say this: given an hour that I spent in a 777 simulator, twenty minutes were spent going from “cold and dark” to pushback, I suspect you’d have a much harder time doing it. Of course, rapid engine starts are possible in some aircraft. It depends a lot on the exact circumstances you're asking (and passenger jets tend not to be designed for inverted flight, for example).

Unlike in a RC or a maple tree seed, recovering from zero-RPM rotor is not possible in a helicopter because the "driving region" of the rotor system can't produce enough rotation to generate lift in the "driven region."

In fact, once a heli rotor RPM is reduced below about 80%, it stops flying

Blade stop autos can be done with model helicopters, proving it is theoretically possible. There are a few differences in a model helicopters rotor design that make it more likely, but here is a video showing it done.

At 1:55 the blades are slowed to the point they are no longer spinning and the helicopter drops like a shot duck, until the operator reduces pitch enough to get them spinning again - without power.

You'd probably not be able to physically withstand the stresses, but I think it's technically possible.

In a fixed wing aircraft this is a common aerobatic maneuver called a tailslide. Many airplanes can safely perform this maneuver, and if you google around, you can easily find video.

Not the answer you're looking for? Browse other questions tagged helicopter aerobatics fixed-wing or ask your own question.

0
Thought experiment: can an aircraft that is dropped from the sky get into gliding?
10
Can single engine planes glide from a falling position?
17
Can the pitch be very different from the angle of attack?

13
Can civilians fly military aircraft?
5
Can manoeuvres like overbanking and high G braking be used in a single propeller aircraft?
9
Can a helicopter really fly with rotors going this slow?
8
Is there anything wrong with this more symmetric aircraft design, and why isn't it used?
1
What are the dynamic stability properties of an aircraft with wings exactly at the vertical CoG?
0
What type of aircraft would fly with an orange light at night?
11
Can a tiltrotor fly safely with one engine?
1
Is it possible to start another engine of Mil Mi 8 with one engine started and APU off?