I am not a pilot, but have a question about radar detection of improvised lawn chair balloons that I thought might be on-topic here. 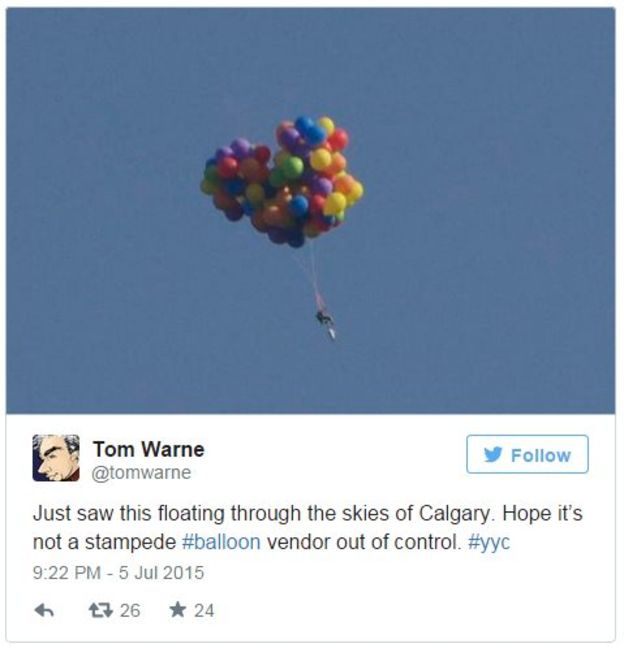 According to the article, he was charged with "mischief causing danger to life".

A similar stunt by American truck driver Lawrence Richard Walters, nicknamed "Lawnchair Larry" or the "Lawn Chair Pilot" also resulted in fines and legal action. In that case, the government dropped the fine for "operating a civil aircraft for which there is not currently in effect an airworthiness certificate" because it was not applicable to that type of aircraft. The article also mentions some other attempts to fly lawn chair balloons, including a fatality from crashing at sea.

A 1970s military research paper on radar supporting the need for secondary transponders in detecting light aircraft also mentions detecting doppler from propellers (p.4) in addition to the primary radar reflection, and I would expect the cross section of a lawn chair to perhaps be within an order of magnitude of that of a propeller. A 2m x 0.5m x 0.5m sparsely filled aluminum chair frame is also still larger than typical microwave radar wavelengths (1Ghz = 30cm wavelength, most radars are going to be above 1Ghz), so it should reflect the radar but of course is a fairly small object compared to large aircraft and therefore the detection range could be lower.

It might be visible to ATC, but, at best, only as one of several inconspicuous unidentified red dots.

It wouldn't appear on aircraft collision avoidance displays (TCAS) and would not trigger any TCAS alerts.

Balloons, and clusters of balloons are mostly air (or similarly insubstantial gas). There is a thin layer of plastic but many plastic materials (e.g. mylar) are transparent to radar, or only weakly reflective.

It is for this reason that aerostats and high altitude balloons carry radar-reflectors when they need to be detected by radar.

Whether the chair itself has a detectable radar cross section depends partly on what materials it is constructed from. I suspect most available lawn chairs are not constructed from solid sheets of metal fixed at right angles but, at best, from a relatively tiny amount of relatively small-gauge metal tubing.

I'd be surprised if any improvised lawn-chair balloon had the same radar cross-section as a glider - and those are allegedly hard to see on primary radar.

Some helium balloons are made from metallised mylar (because it keeps the helium in for longer). These may be much more reflective to radar. The Calgary aviator pictured was said to have used "oversized party balloons" - they don't look like the metallised balloons that are commonplace where I live.

A perfectly conducting metal sphere of 1.15m diameter has a radar cross section of 1 m²

Some other radar cross section values:

So far as I can tell, most civilian ATC and powered aircraft (TCAS etc) don't really make much use of primary radar to detect other airborne vehicles. They rely on transponder returns (i.e. secondary radar)

Even a large metal object like a Boeing 777 can disappear from the view of ATC and other aircraft when it turns off its transponder.

Last month, the Swedish government complained that a Russian military aircraft had been flying near its airspace with its transponders turned off to avoid being spotted by civilian radar, and nearly collided with a passenger jet.

I'd be surprised if an improvised lawn-chair balloon was detectable where a Tu-95 was not.

This is from what is said to be a radar recording of flight 77 (at 4:18) probably at Dulles after controllers were aware of the prior 9/11 attacks. 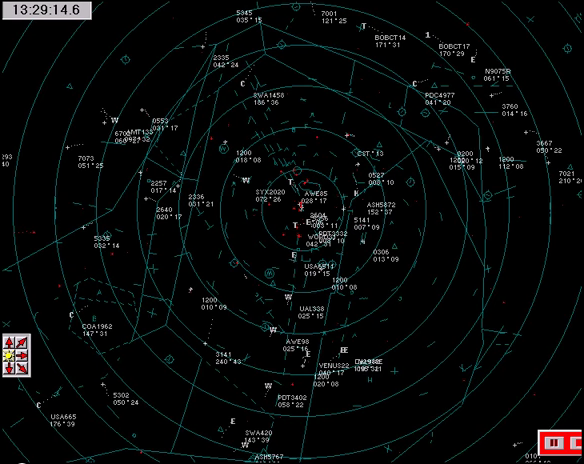 Flight 77 had turned off its transponder, it is one of the small red dots at the left. Here's a closer look at that 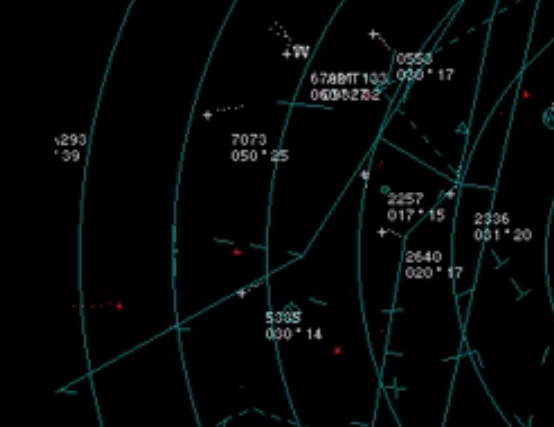 Flight 77 is the red dot about 20% in and up from bottom left. There are other red dots that come and go but this one tracks steadily from left to right. I'd guess an especially alert controller who is not very busy would notice this sort of dot. Even if the radar display doesn't filter it out, unannounced slow-moving lawn-chair balloons appearing from the suburbs might not always be noticed (though see James' comment to Peter's answer which suggests they often do notice and act on such targets).

Transponders are mandatory for flights in some types of airspace in many parts of Europe from March 2008 onwards. This includes balloons and other light / recreational aviation and aircraft.

So I suspect that authorities will expect aviators in lighter-than air vehicles will take appropriate measures to be in communication with ATC/other aircraft and perhaps to be visible to secondary radar in airspace where they may come into conflict with other aircraft.

He had wrapped his tether lines in foil in the hope that they would show up on radar, and, sure enough, he was picked up on the screens of controllers at Boston's Logan airport

So you probably need to take specific measures to make yourself more likely to show up on primary radar.

When attaching balloons to your lawn chair, first scrutinize the intertubes for designs for large improvised radar reflectors you can dangle from your vehicle. Hope that nearby on-duty ATC controllers have their displays set to show primary radar returns and not just secondary radar returns.

Primary radars are sensitive enough to pick up even large birds. A lawnchair ballon would certainly register if the settings allow. To suppress the signals from birds and other non-aircraft objects, a minimum speed is required for primary radars to show a blip to the controller. Since the lawnchair is moving with the wind, it will be filtered out, unless the settings are changed, but then a lot of other signals will show up, too. To identify a lawnchair balloon will be almost impossible - the radar would need to track the ballon and distinguish it from birds due to the different, steady motion. I doubt that there is any such algorithm in regular use today.

Would it show up as a primary radar target? Yes, it could. Primary radar would however rather see the whole bunch of balloons rather than the chair, so it would create a primary target. Primary radar sometimes picks up flocks of birds, too.

Would it show up on TCAS or FLARM? No, as TCAS and FLARM are based on radio signals being broadcast and received between the devices, either transponder or other TCAS, or in the case of FLARM, other aircraft equipped with FLARM. Neither of these devices pick up airborne objects that do not emit signals.

Not the answer you're looking for? Browse other questions tagged safety radar or ask your own question.

4
Detection of solar balloons by ATC primary surveillance radar
8
Can radars detect small drones?
1
Can radar detect a small flying device with MEMS microengines?
5
What would be the process to approve a minimal, standardized flight recorder for commercial balloons?

14
What is the range and accuracy of ATC radar systems?
11
How will radar systems be used in FAA's NextGen ATC plans?
18
What data is displayed on civilian ATC radar screens?
3
Radar Control; is it possible for ATC to instruct track instead of heading?
1
How can the radar range for ATC be estimated based on stated maximum radar range?
24
Which map projection is typically used on ATC radar screens?
1
How does ATC radar display differ from military radar?
7
What does “leave clear on its left” mean in UK regulations relating to collision avoidance on non-runway landings?