How effective are modern aircraft at clearing smoke?

In reference to this incident by a certain (in)famous artist, i'm wondering how effective modern aircraft are at clearing smoke for single aisle commercial aircraft such as B737/A320 or a business jet like in the story?

The most relevant data I could find was located here, in a study on "In-flight cabin smoke control". In the abstract, they stated that

Tests on a Boeing 757, modified to allow smoke venting out through the top of the cabin, showed that the buoyant smoke front moved at 0.46m/s (1.5ft/sec) with and 0.27m/sec (0.9ft/sec) against, the axial ventilation airflow. Flight tests in a modified Boeing 727 showed that a ceiling level counterflow of about 0.55m/sec (1.8ft/sec) was required to arrest the forward movement of buoyant smoke. A design goal of 0.61m/s (2ft/sec) axial cabin flow would require a flow rate of 99m3/min (3500ft^3/min) in a furnished Boeing 757. The current maximum fresh air cabin ventilation flow is 78m^3/min (2756 ft^3/min).

In short, during continuous generation of smoke, cabin air will not be recirculated quickly enough to stop smoke from filling the cabin; however, if the smoke production is temporary, then it should dissipate quickly (time of course depends on the size of the cabin and the amount of smoke produced).

On page 2 of this article, a discussion of airflow occurs and contained this image, showing circulation patterns on wide-body airliners. A linked study on that same page noted that an under-floor displacement air distribution system [like the commonly used type picture below] can provide a much better air quality than a mixing air distribution system. The paper goes on to provide more diagrams of airflow and comparisons of various effectiveness if you're interested. 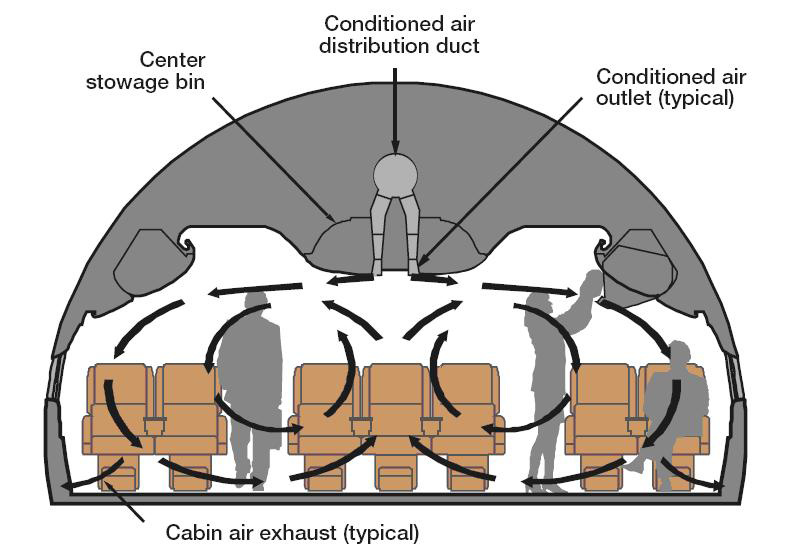 Boeing has a fairly detailed summary of their cabin airflow here. It says:

Inside the cabin, the air flows in a generally circular patterns and exits through floor grilles on either side of the cabin and on airplanes with overhead recirculation, the air may exit through the overhead. The exiting air goes below the cabin floor into the lower lobe of the fuselage.

So at least on most Boeing planes, air exits at your feet, though it can exit at the ceiling. Airbus also has a page here, but with much less detail. Airbus claims a complete recirculation every 2 to 3 minutes, while Boeing merely states airflow is continuous. The article linked below says in general, airplane recirculation occurs aproximately 20 circulations per hour.

An NBC article on cabin air states that to pick up a sickness, you need to be close, usually within two rows. The article goes on to say that:

The aircraft is divided into ventilation segments of three to seven rows; you share air only with passengers in your segment.

So presumably if there were smoke, it would be captured in a small area were it not too pervasive.

15
What are these grilles in the passenger cabin of this 787?
8
Do pilots ever increase the cabin altitude intentionally?
7
What would happen if you turn on all air vents simultaneously?
3
Why is the temperature of the cabin so low during a flight?

20
How are aircraft separated in a non-radar environment?
12
Are modern fighter jets allowed to fly with an inoperative ejection seat?
4
On what principle(s) do aircraft smoke detectors work?
3
How are aircraft protected from lightning strikes by conductive skin?
28
Is it safe and effective to have “glider pilot mentality” when landing single-engine fixed-wing aircraft?
2
In modern commercial aircraft, is it possible for pilot inputs to exceed the tolerable structural loads?
21
How to land the aircraft when the flight deck is full of smoke?
3
How frequently are avionics on large commercial aircraft updated?