What determines the touchdown zone and aiming point markings on a runway?

Large runways usually have a marked touchdown zone, and a marked aiming point (with two giant bars in the US). How is that location chosen? It seems like it is frequently further down the runway than I would have thought maximized available runway length.

How important is it for an airliner to land on that spot? Are there regulations about this?

There are actually several different indicators on the end of a runway. Here's a diagram of the most common ones during the day: 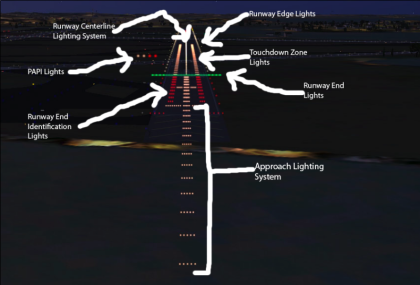 The first touchdown indicator, as shown, is usually placed a set distance (here 500') from the threshold of the usable runway. Then, there are additional markers at 500' increments. Which one the pilot will aim for on approach depends on the plane he's flying, its weight, and instructions from the tower such as to land "deep" or "shallow" (light craft, and sometimes even commercial airliners, are often given these instructions to help manage air and ground traffic more efficiently at peak times).

As you can also see from the night shot, the glide slope lights (here using a system called PAPI which is a more precise indicator of slope than the older and more well-known "white-over-red" VASI) are positioned smack in the middle of the touchdown zone; again, with an approach path aiming directly for that point from the pilot's perspective, the plane will touch down on full-strength runway pavement even if he's in a 747-800.

Of course, maintaining that glide slope all the way in is not the greatest idea, as a standard descent rate for an airliner on final approach is 400ft/min, which works out to more than 6 feet per second. Even the cushiest main gear struts are going to make that a pretty rough "smack" in the seats of the passengers and can cause very expensive damage to the airframe itself. To avoid that, pilots usually add a little throttle and/or pitch up a few more degrees in a maneuver called a "flare", which reduces the rate of descent, ideally zeroing the plane's descent rate just as the wheels touch. This means that during the last few seconds of approach, the glide slope decreases, moving the "aim point" further up the runway and causing the main gear to touch further down the runway.

You'll find that if you look at the touchdown marks on older, well-used runway surfaces, touchdown of the main gear (remember that's anywhere from 50 to 150' behind the pilot's perspective and up to 25' below it) actually ends up centered pretty close to the ideal spot, due to the leveling off of the flare maneuver: 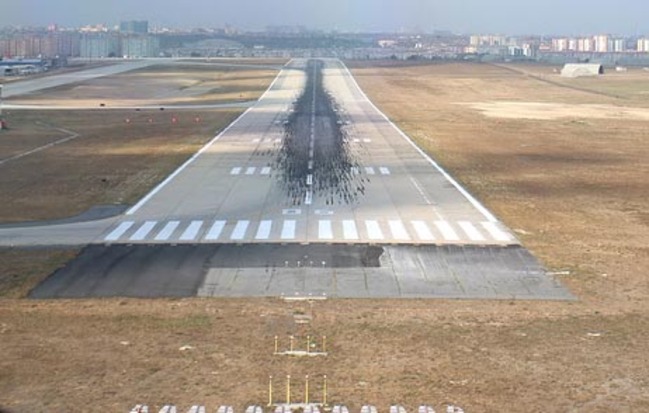 You can see in this image the average touchdown point (the widest and blackest part of the runway) is right at the PAPI lights to the left.

You'll also notice a few significant tire marks just a little too close to the threshold for comfort. Clearly landing a plane is not an exact science, and this is why the touchdown zone and aiming point is further down the runway than you might think; a sudden downdraft or a thinning of the air due to surface heat at just the wrong time in these crucial final seconds, and if the pilot was aiming for the threshold, his main gear will touch down short of it, possibly doing millions of dollars of damage to his plane, the runway and approach lighting as well as likely closing the runway.

9
What determines the positioning of PAPI lights from the runway threshold?
12
Why five touchdown zone markings for only one aiming point?
5
Does a pilot follow the PAPI lights in the same way in all categories of aircraft?
6
What are runway Aiming Point markers used for?

23
What determines in which direction a runway is used?
6
What are runway Aiming Point markers used for?
12
Why five touchdown zone markings for only one aiming point?
10
What are those markings on runway 25L at Frankfurt Airport?
13
On a calm day, what determines the active runway?
7
At what distance beyond the aiming point is a landing considered a "Deep Landing"?
10
Why not make the touchdown zone of runways wider than the rest?