Between land and sea, which route is preferred?

Also, this is just a case, in general out of land and sea, which route is preferred? One common argument is that you are safer by flying over land in case of an emergency, but are there any aerodynamic concerns also involved?

The ususally preferred path will be the shortest, as any additional km flown will require extra fuel. 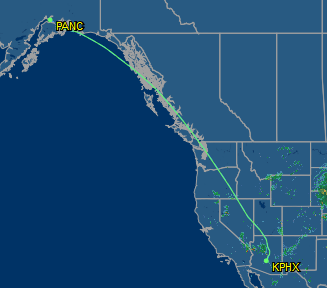 As you can observe they fly pretty close to the great circle passing through the two airports, meaning that they will fly partially over the ocean.

This poses no additional risks, as the shoreline is never really far away and in case of emergency an alternate airport will most likely always be within reach.

At the cruising altitude of most airliners, there is no noticeable aerodynamic difference between being over land or over sea. At lower levels, being over sea would typically offer less turbulence, in part because as the ground warms you can encounter rising air thermals.

One thing to consider when choosing between an over-land or over-sea route is the distance to another airport should an engine fail. You might have heard of ETOPS. Basically, twin engined aircraft must fly within a certain distance of a suitable landing site - often 2 or 3 hours of flying time on one engine. In the middle of the ocean the quickest route may take the aircraft outside of this range, so it will have to fly closer to land, or even in certain remote parts of the world, still over land.

Another consideration is life rafts. They are legally required when flying more than 25 miles (if I recall correctly) out to sea. Life rafts add weight and therefore cost so some airlines have actually removed life rafts from their aircraft, or at least only have a few of their jets allocated for flights over water.

11
Can I display the route which I have created with skyvector.com on google maps?
4
What's the difference between TWEBs and TIBS?
7
What's the difference between Free-Flight and Free-Route?
1
How are “preferred routes” assigned if there is more demand than capacity on a route?
1
Is the route which takes the least time always the one with least fuel-burn?
3
What is the purpose of including sea level pressure and temperature in a METAR?
4
Is the “auto-routing” created by online flight planning resources preferred by ATC over Direct routing when NO preferred route exists?
0
What is the difference between company routes and pilot routes?