What is the difference between Turn Coordinator and Artificial Horizon?

I was reading this question about Turn Coordinator and Artificial Horizon, and now I want to understand the differences between those two components. 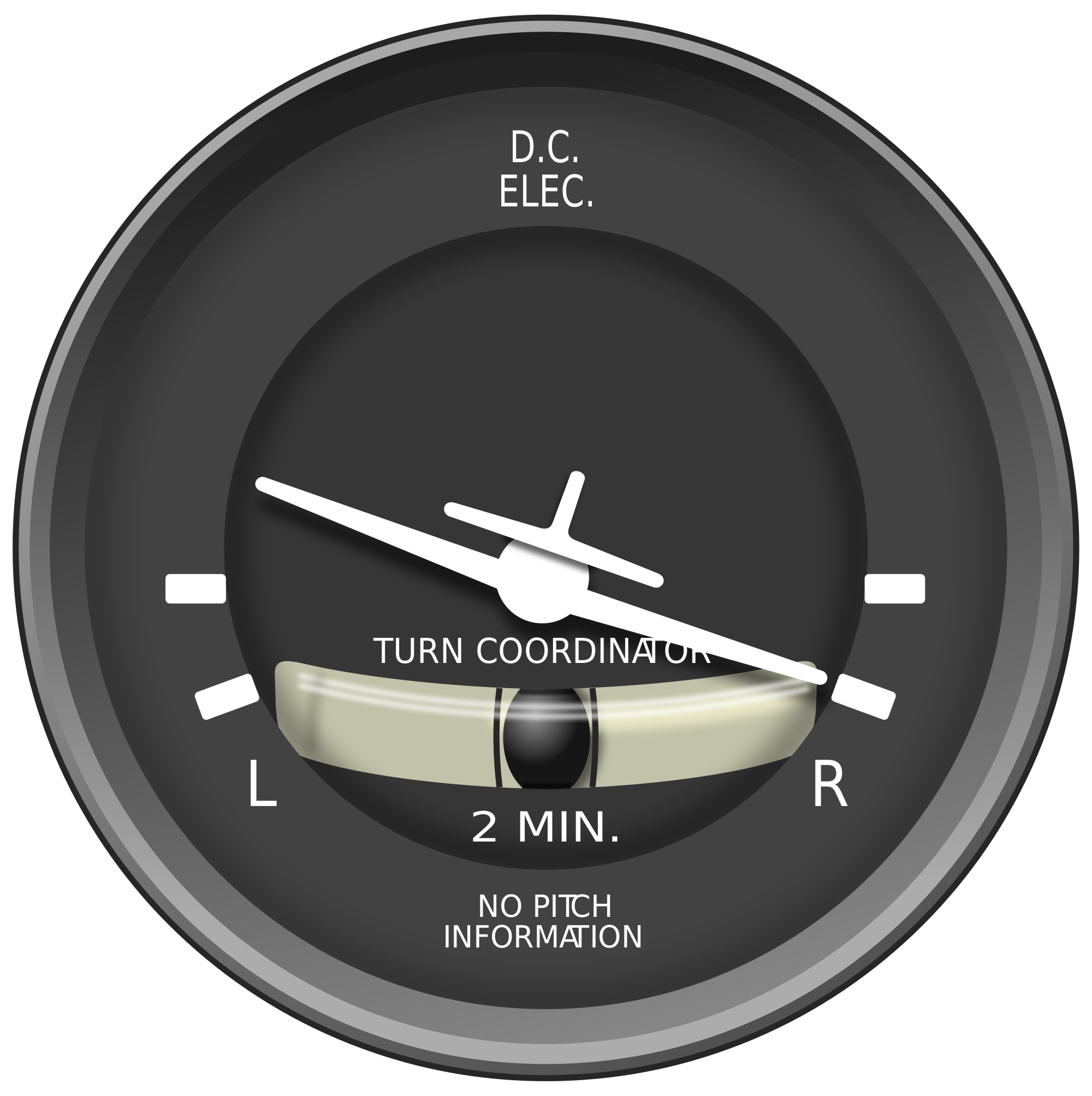 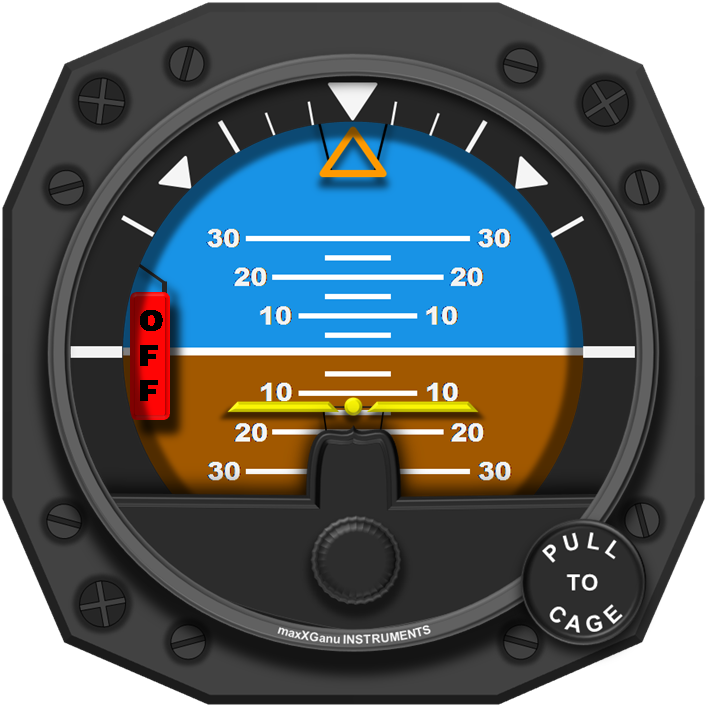 It shows your attitude (nose up / down, bank left / right) relative to a horizontal surface. Basically, it tells you the orientation of the plane if someone were to take a photo of the plane from the outside at this very moment.

It does not tell you which way you are going (e.g. you can be nose up but descending).

This is actually two instruments in one: the white plane and the little ball.

If you are yawing at the standard rate (3 degrees per second), the wing of the little plane will align with the white mark.

Suppose that you manage to yaw the plane to the right while keeping it horizontal, like a spinning top: 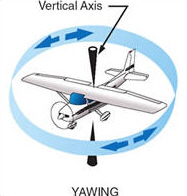 The primary difference is labelled right on your image of a TC: "NO PITCH INFORMATION". The artificial horizon is basically a pitch/bank position indicator, while the turn coordinator is a yaw/bank rate indicator. The horizon thus shows you how your aircraft is oriented right this instant, while the TC shows you how fast your orientation and/or heading is changing over time.

First, a correction from some other answers. A Turn Coordinator is not the same instrument as a Turn/Slip Indicator. They show similar information and are used interchangeably in normal flight, but they indicate slightly different things.

This is a Turn/Slip Indicator: 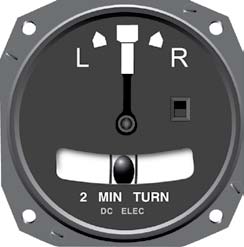 Notice the much simpler display. When the bar on the needle lines up with either of the home-plate symbols, you are yawing at a two-minute turn rate. No confusion with bank angle or any other indication of attitude.

The gyroscope in this device is basically rotating in a plane parallel to the aircraft's wings, and precession of this gyroscope induced by the aircraft turning is what drives the needle. However, a pure banking maneuver to start a "coordinated" turn doesn't show on the gauge; the aircraft has to start rotating relative to its up/down axis. This can make for a rough ride when attempting to bank to begin a turn, especially if that turn is being initiated by an autopilot; there's no gauge on board the aircraft to measure roll rate.

To solve that problem, the gyroscope in the instrument was canted 30 degrees in the plane from nose to tail; this makes the gyro sensitive to wing roll rate as well as fuselage yaw rate. This new version, the "turn coordinator" allows autopilots (and human pilots) to execute smoother turns in IMC.

However, there's a downside. Back in the 1920s, flying into a cloud, especially a large one, was often fatal; there was no artificial horizon yet, so once the pilot could no longer see the real horizon, if the plane's attitude were upset he'd be unable to recover. Then a pilot, Howard Stark, worked out a simple method using only the TSI and altimeter to recover from an upset; use the rudder to center the yaw needle, then ailerons to center the ball (with neutral yaw, the ball indicates the direction of gravity), and finally level out of any climb or dive until the altimeter is steady. This became known as the Stark 1-2-3 method and it saved a lot of lives.

The new "turn coordinator", because it responds to bank as well as yaw, will show you "yawing" again once you proceed to "step 2" and try to level the wings. Therefore, you can't use the Stark method with a Turn Coordinator. To indicate this and thus prevent pilots trying to use it as such, the display of the Turn Coordinator was changed to the symbolic aircraft: 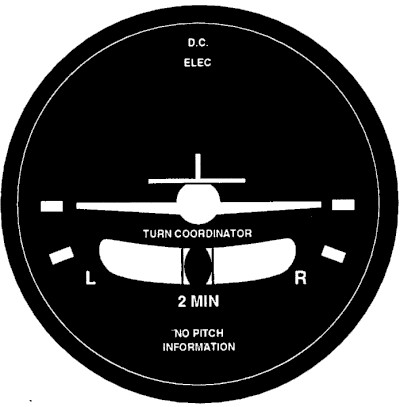 The display makes some sense as the gauge will respond to roll rate, so it can be thought of as a combination roll/yaw rate indicator.

The modern method to keep an airplane in stable flight in IMC instead involves the artificial horizon: 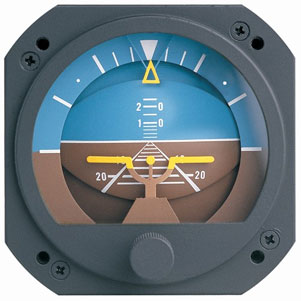 Using a gyroscope mounted in gimbals, calibrated and subtly corrected in flight to rotate parallel to the ground (on an axis parallel to gravity while in level flight), it becomes possible to determine your exact angle of pitch and bank using a simplified representation of the real horizon. Blue is sky, brown is ground. Pull up, you see more sky, less ground. Nose down, just the opposite. Bank left, horizon rotates right, and vice versa, all like the real horizon out the window would be doing if you could see it. The instrument, as you can see, has markings indicating definite angles of pitch and bank.

Now, to recover from a minor upset in IMC, you simply pitch and bank to return the horizon to level, then while the horizon is stable, the Turn Coordinator will show you if you're yawing and how to correct it. This reduces the need for a pure yaw indicator in most normal situations. Extreme maneuvers, however, can render the AH unusable, so specialized "spin recovery training" is required to teach pilots how to recognize and quickly recover from extreme instabilities such as spins (uncoordinated stalls) and spiral dives.

It is actually a turn and slip indicator. It tells you if you are:

This, the attitude indicator, tells you:

The pull to cage know will cage the instrument, that means it will take its current pitch and bank as the new zero-reference position. 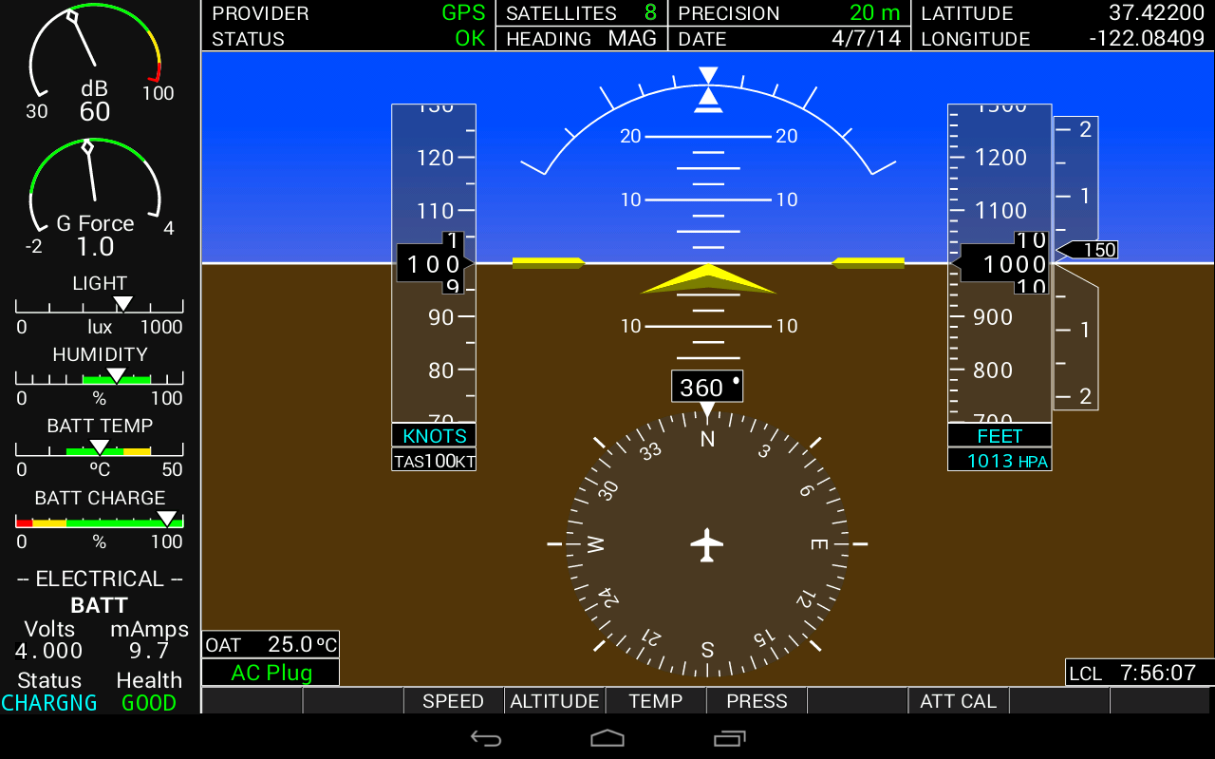 The horizontal bar below the white triangle on the top arc is the slip/skid indicator.

Modern electronics are replacing the vacuum-pump driven AI pictured. Another example is the Garmin G5, with a 4 hour battery backup.

Boasting a bright, 3.5-inch sunlight-readable liquid crystal display (LCD), the G5 is approved as a primary source for aircraft attitude or turn coordination information and secondary source for altitude, airspeed and vertical speed in a single instrument. Installation is simple and easy as the G5 integrates with the aircraft’s existing pitot/static system to display attitude, airspeed, altitude, vertical speed, slip/skid, turn rate, configurable V-speed references, barometric setting and selected altitude as well as visual alerts upon arriving at the pre-selected altitude. GPS-based track and groundspeed information is also displayed. A dedicated rotary knob also allows for easy adjustments to barometric pressure setting as well as altitude and ground track bugs. 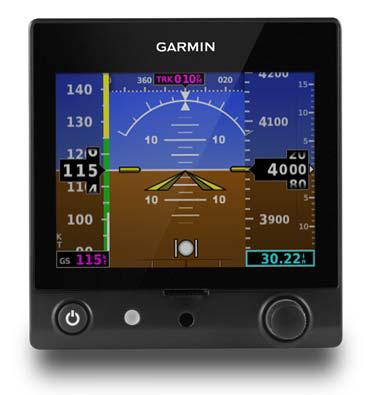 Not the answer you're looking for? Browse other questions tagged flight-instruments glass-cockpit or ask your own question.

13
When/How may I replace the Turn Coordinator with an Artificial Horizon?
7
For light, GA aircraft, is there a "standard" turn, and what does that mean?
0
Is the turn coordinator showing yaw or roll a mix of the two?