What is the relation between roll angle and pitch angle?

For example. At its initial position, the aircraft is standing on the runway). I got roll and pitch values from a sensor. Lets say X and Y resp. Now, when aircraft is taking off, it is obvious that it will pitch up so my pitch angle will change to lets say Y1. Now if I look for roll Value, will it be same 'X' or it will be different?

Roll, pitch and yaw are rotations about the principle body axis of the aircraft. Roll angle, pitch angle and yaw angle together describe the attitude of an aircraft.

The principle body axes are:

Initially when all angles are 0, the aircraft is wings level, nose pointing at the horizon and heading north. 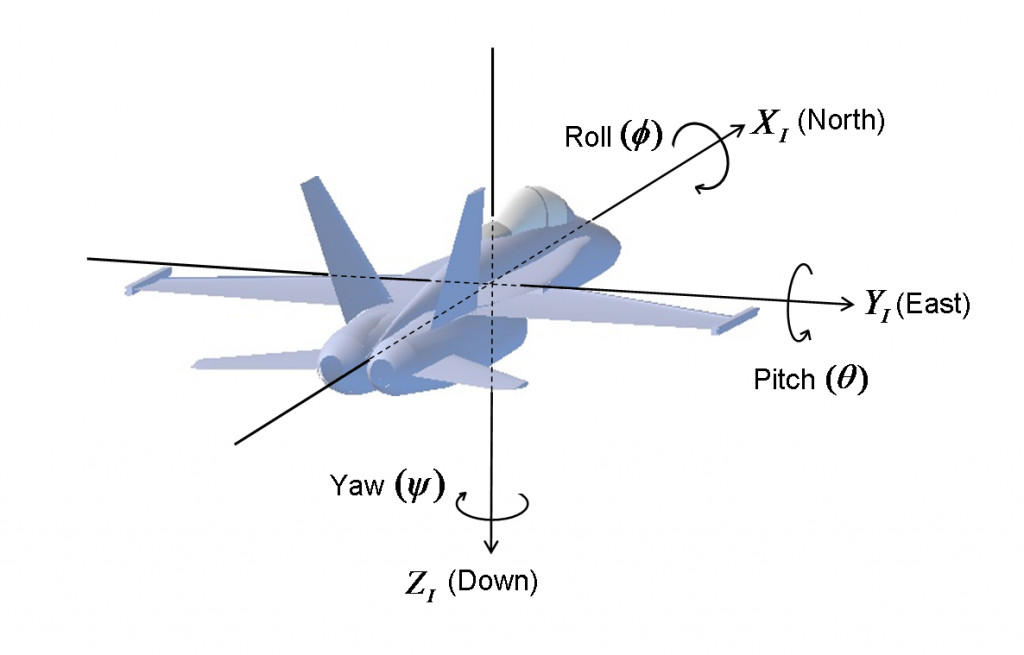 The angles $\phi, \theta, \psi$ describe the attitude with respect to this initial positions. They are called Euler angles 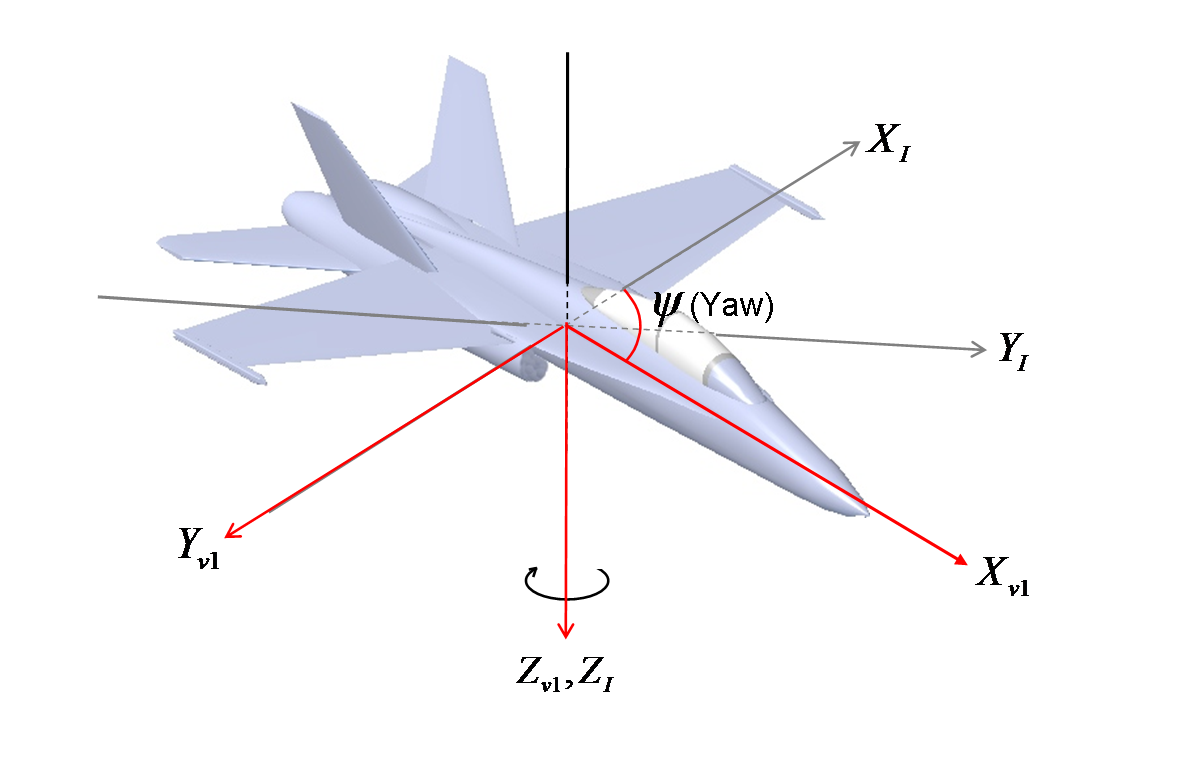 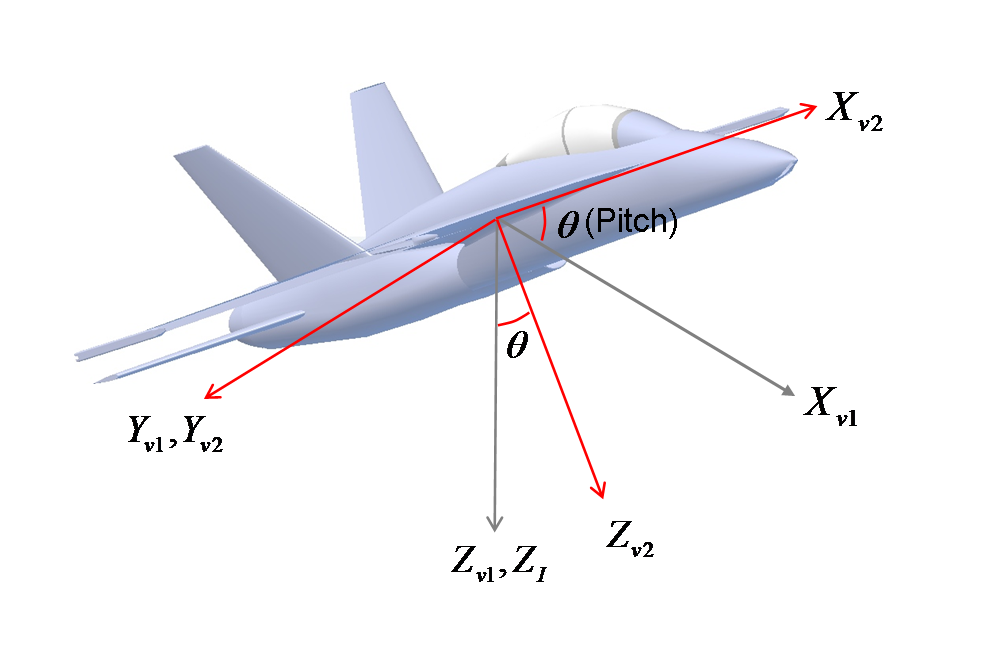 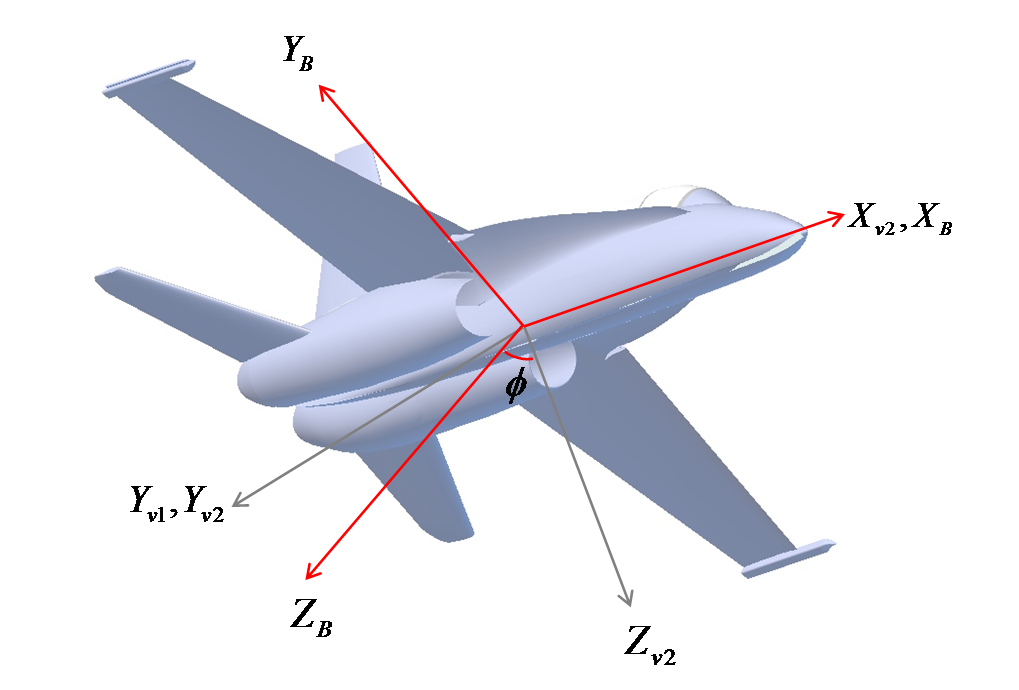 This describes almost every possible attitude uniquely, unless the pitch angle is +/- 90 degrees. Then roll and yaw will become ambiguous.

Open your right hand with the palm facing up, you thumb at a right angle to the fingers. The middle finger is the X-axis, the thumb is the Y axis.

Now roll your hand 45 degrees counter clockwise, keeping the fingers pointed at the horizon. Your thumb will now point 45 degrees into the air. This was a pure roll manoeuvre, the pitch angle is still 0 degrees.

Now flap your hand 90 degrees up using your wrist, this is a pitch up manoeuvre since you rotate about your thumb axis which is the Y axis.

Now you see that your fingers are all in the same vertical plane, pointing 45 degrees up to your left. If you describe this position with respect to the initial position, the pitch angle is 45 degrees, and the roll angle is 90 degrees. So pitching 90 degrees resulted only in 45 degrees of pitch, but also in 45 degrees of extra roll.

If your sensor is not aligned with the body axes of the aircraft, you will see a lot of cross-effects between the angles during a take-off.

The mathematical relation is well described on this page, which is also the source of the images above.

Not the answer you're looking for? Browse other questions tagged navigation flight-instruments flight-data-recorder attitude pitch or ask your own question.

14
What are the exact meanings of roll, pitch and yaw?

13
Why does an aircraft pitch up when the speed increases?
6
How can I estimate Roll from Position?
7
How does having a bigger engine placed slightly more forward and higher impact the plane in pitch?
14
What are the exact meanings of roll, pitch and yaw?
14
Why does spoiler extension cause straight-wing Learjets to pitch down, rather than up, and why did it take so long to discover this?
1
Does it make sense to say an aircraft has an attitude of 3° or that it has a flight position of 3°?
2
What is the relation between velocity and rate of pitch?
2
How can I calculate the relationship between propeller pitch and thrust?
0
How do fighter jets stop pitching motion after a elevator deflection?