Why did air traffic levels decrease dramatically in the US through the 2000s?

System-wide, air traffic has declined by 24 percent since peak year 2000. The chart in Figure 1.1 shows that air traffic volume is not expected to return to peak levels in the near term. 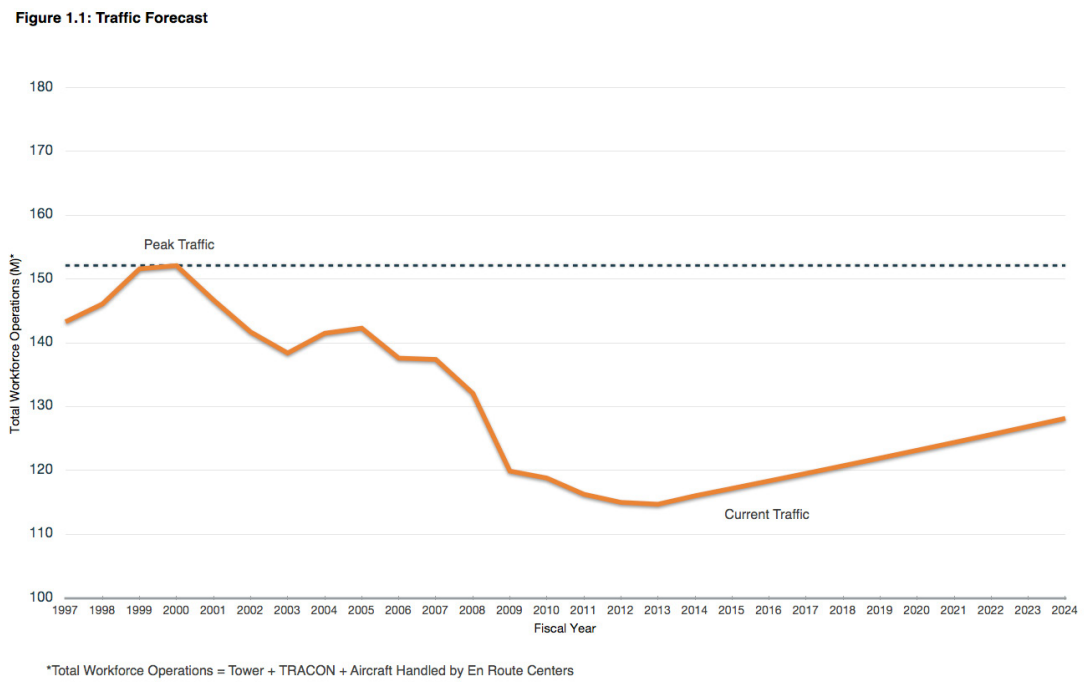 This is talking about traffic in terms of ATC operations.

My question: why was there such a drastic, sustained drop-off? I understand that commercial traffic dropped off after 9-11, but I assumed it had since returned to 'normal'. Apparently this is not the case, but are there any other reasons? Is it something with the metric? It doesn't seem like there are any less people flying, do airline fleets consists of larger jets than 15 years ago?

It isn't just one thing, but a vicious cycle:

All of these things have deterred all but the most necessary travel by air; getting on a plane is so expensive, so dehumanizing and so uncomfortable that it's only done if you have to get somewhere and can't take the time to drive there (or you have to cross a major body of water to reach it). That has reduced total passenger count, and since a flight only makes a profit if it's very near full, that reduces the number of flights airlines make. However, that decreases total revenue to offset the overhead of the airline (marketing, scheduling, maintenance, etc), so airlines cut costs by slashing services, making a flight on their planes even more miserable, reducing the general desire to fly, reducing passenger count. The vicious cycle continues.

This reduction has been offset somewhat by U.S. airlines "rightsizing" their fleets, opting for more flights with smaller planes. This gives passengers their choice of flight times while keeping planes full and pilots/flight attendants employed. Boeing is focusing primarily on this market in new plane orders with the smaller, more efficient 737, 777 and 787, while the original "jumbo jet", the 747, is on its way out of most passenger fleets and the A380 is struggling outside a couple relative niche buyers like Emirates and Qantas that specialize in ultra-long-haul flights.

Increased air cargo flights have also made up some of the difference; boxes don't care nearly as much about being stacked like sardines in an old aircraft (when was the last DC-10/MD-11 you flew in as a passenger? UPS still has dozens of them in the cargo fleet) with minimal amenities, so thanks to the success of e-commerce, FedEx and UPS are raking it in and growing their air fleets (though they passed on the A380 in part due to Airbus not prioritizing the cargo variant), while American is scheduled to reduce its fleet by 30 planes this year and is still struggling to report a profit even with prices and services cut to the bone.

Your air traffic controller's metric doesn't mean anything to most people. Here is what actually happened as measured by passengers carried, and it looks nothing like your graph. 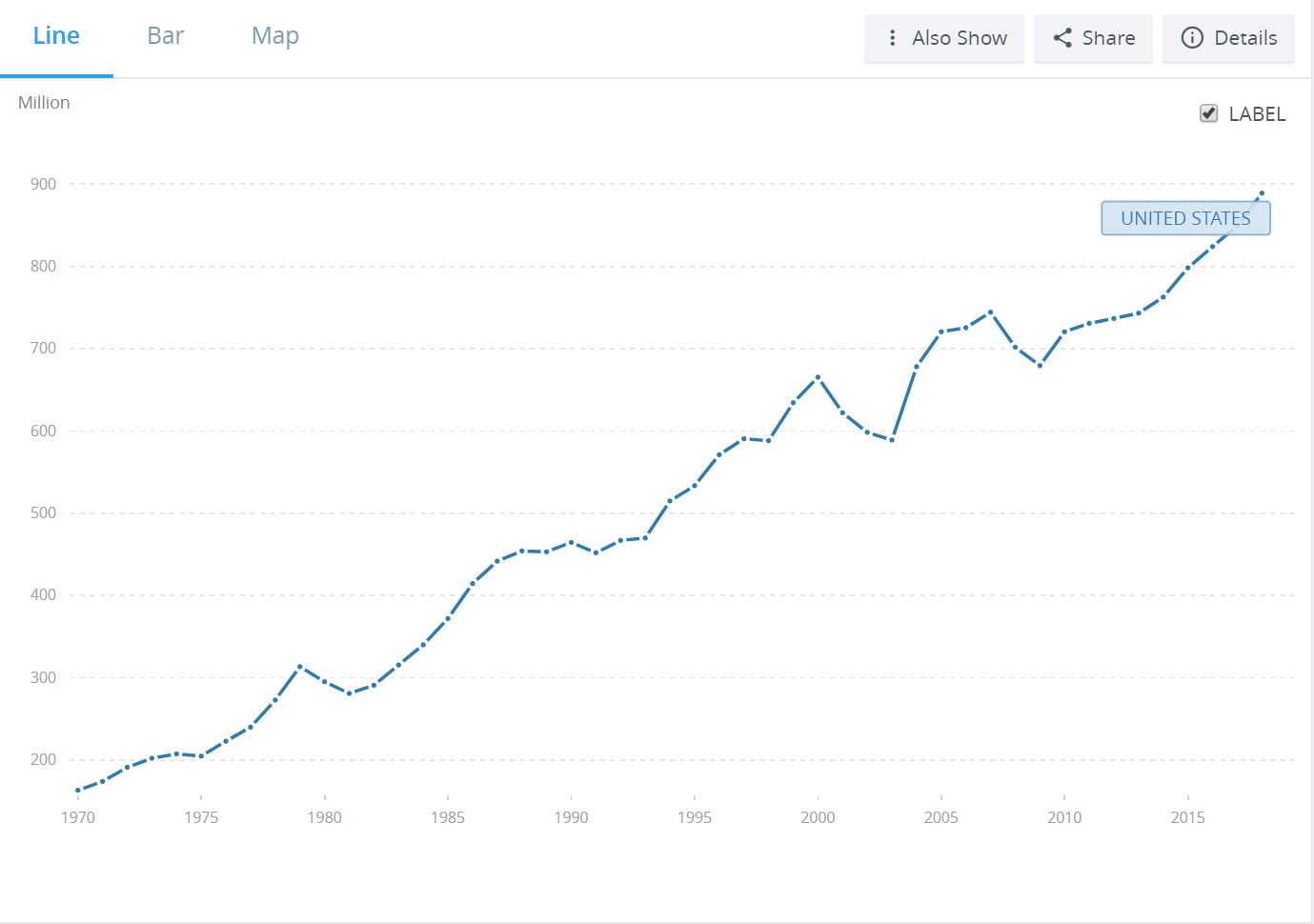 The 911 attacks in the US caused a blip after 2000, and the world financial crisis caused another after 2008, but passenger growth has been growing exponentially since deregulation started in the 1970s. The answers trying to explain the graph as reduction in demand are not correct.

Aircraft size and frequency now match demand, and they are packed full. US domestic load factors went from 70% in 2002 to 85% in 2017, an 18% increase. Ryanair is hitting 95% in Europe. Aircraft are also getting bigger, or at least seats are getting packed closer together. MIT saw US seat capacity per departure increase from 165 to 178, another 8%. Ryanair only flies aircraft with 189 seats, and new aircraft will cram in 197.

Cheaper fares, lots of travelers, and a lot fewer empty planes flying government mandated routes. Since your graph only indicates a 20% drop in aircraft movements, this explains much or all of the difference.

People travel by air for mainly two reasons, and both require money:

Since the source of that chart is FAA, my answer is mostly related to USA, but it can generalized globally.

Years leading to 2000, there was an economic boom. Air travel was increasing. By 2000-2001 (before 9/11), dot-com collapse resulted in a recession. This forced companies to lay offs and not to pay for air travel.

Economy started to get better after that, and then the recession of 2007-2008 hit. Companies learnt an even bigger lesson not to spend money on luxuries.

Economy started to get better again. Air travel started to increase again, but did not peak and is not predicted to peak to the same level as of 1999-2000.

Why? After a financial calamity, companies and people are very reluctant to adopt same spending behaviors as before the calamity, since there is an uncertainty of it happening again.

After 2000, airlines was one of the industries which was hit the hardest. So they wanted to maximize their profits. That means that all airplane seats must be occupied. This resulted in fewer flights, and also increasing codeshares.

Many airlines acquired other airlines. In the US alone, several major airlines merged together, eliminating redundant and unneeded flights. This reduced air traffic too.

Also with economic issues, people started to spend less on their hobbies. As a lot of GA traffic occurs on airports with ATC, this reduced ATC operations too.

As Federico has mentioned, only A380 is the larger aircraft so this reason is not likely to contribute for decline in air traffic. On top of that, A380 is mostly used on international routes whereas the majority of air traffic is domestic.

As you can see the steepest drop is not around 2001, but between 2007 and 2009, the years when the current financial crisis began, it is reasonable to assume that many passengers remained home because of that.

Concerning the size of the aircraft, except for the launch of A380 in october 2007 with Singapore Airlines, I would say that it hasn't increased significantly over the last 15 years.

Not the answer you're looking for? Browse other questions tagged commercial-aviation airline-operations usa datasets or ask your own question.

7
Why did the Flightaware groundspeed readout suddenly spike for this flight?
7
To what extent is the clerical work (i.e. amending flight plans, logging, etc.) of a center air traffic controller now automated?
61
Why isn't the Presidential 747 "Air Force One Heavy"?
2
Is data on international air traffic volume in the US freely available?
9
Why would flares be fired into the air after a flight lands?
20
Why didn't Air India always fly DEL-SFO over the Pacific?
6
Why did my transatlantic flight meander off the great circle?
0
Why did the 747-8's freighter version make its first flight before the passenger version?