Maybe this isn't the right forum for this question but anyway:

But why does this work? Some energy from the expansion is used to turn the turbine which powers the compressor. Why is this self sustaining?

btw: It seems to be tricky to keep a jet engine running. There are examples that airliner engines sometime stall (Loss of airflow/compression in the engine)

And in some engines it turns the turbine which has a large fan attached to the other end. The engine produces more power than needed to run itself.

Inside the engine, everything is a very careful balance of pressures. Basically the job done by valves in a piston engine is done by careful engineering in a turbine, which is one of the reasons they cost so much. The inflow to the combustion chamber balances the outflow to the power turbine to the point where it wants to go that way - get it a little bit out of balance and you have noisy stalls like you see in the referenced video.

There are a few points I will make but first off a jet engine is NOT self sustaining. It takes the input of fuel to keep running. The fuel is the source of energy that keeps it running. Now lets look at the mechanics a bit, to simplify things I will use a Ramjet instead of a turbine driven jet since the compression is taken care of by the simple shape of the engine, no moving parts. Lets assume the jet is moving (ram jets dont work at zero speed). 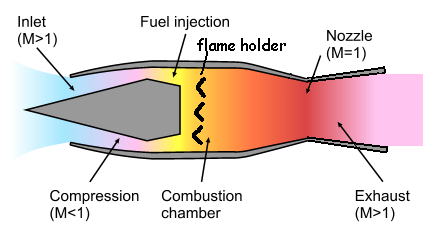 To make this all work the output energy has to be greater than the energy needed to compress the air. This energy comes from the fuel that is added to the mixture. Jet fuel has about 46 MJ/Kg. 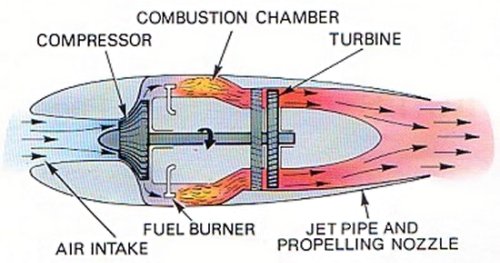 Basically, the energy released by burning fuel is used to compress and accelerate the airflow through the engine. While you correctly note that the turbines pull some of that energy back out of the airflow and use it to keep the engine spinning, this is a relatively small fraction. Since accelerating the air backwards produces an equal magnitude, opposite direction force on the engine itself, a large forward force is applied to the engine, which is then ideally used to accelerate the airplane forwards and/or counter the aerodynamic drag forces on the airplane in order to maintain speed during flight.

As far as why the flow remains front-to-back through a turbine engine core, this has to do with which side is applying more force to the airflow. The compressor stages are designed to produce more force on the air than the turbine stages are, so the net acceleration on the air is toward the back of the engine. This question covers the topic of airflow through the engine more thoroughly. This question on Physics.SE also addresses this topic.

Newton's Third Law of motion states "For every force of action, there is an equal and opposite force of reaction." So if the exhaust is pushed out of the back end of a jet engine with 40,000 lbs. of force, there is 40,000 lbs. of force pushing the jet, and the aircraft to which it's attached, the other direction.

The reason it’s self sustaining is that a considerable amount of power - about 75% of the total increase in enthalpy for the air moving through the gas turbine - is used to power the compressor section of the gas core. The remaining 25% or so of the available power is either converted into velocity by a nozzle to create reactive thrust (turbojet) or to drive a power turbine which drives a ducted fan, or a reduction gearbox which drives either a propeller or powertrain (turbofan, turboprop, turboshaft).

Now this process does require the engine core to operate at a very high speed in order to provide enough energy to sustain the compressor section of the gas core. Typically when started, the gas core must be spun up by either an electric or pneumatic starter to around 12-20% of its maximum operating speed before fuel is introduced during the process. Too slow, and the combustion process will not sustain and speed up the core to a typical idling speed around 60%. Worse, this spin up will lag or delay (hang start) which can overheat and permanently damage the hot section of a turbine engine. Pilots are always wary of this and will watch the engine temps like a hawk as fuel is introduced during the startup process. It is the one Achilles heel of an otherwise rock solid and reliable type of aircraft powerplant.

After that it becomes a matter of careful engineering to make the turbine and compressor perform sufficiently across the operating range of the engine.

Not the answer you're looking for? Browse other questions tagged jet-engine aircraft-physics or ask your own question.

1
Can an engine on a Boeing 737 fly just using compressed air instead of jet fuel?
-2
How does a turbojet power its own compressors?
37
Why do gases in the combustion chamber only flow one direction to the gas turbine in a jet engine?

26
How does thrust reversal work on a jet engine, and when should it be used?
15
How does jet engine water injection work?
0
Why are inlet vanes used instead of variable geometry inlets to prevent compressor surge/stall?
0
How does bypass air work?