Are drones used in firefighting, agriculture and pest control?

Well, as the question says I am interested in the use of drones in agriculture.

Are there any drones designed to carry a tank of some chemical or water?

How large are those tanks?

I have seen that airplanes are used in agriculture and in extinguishing forest fires. They can carry tanks containing 500-2000 kg (or more) of chemicals/water.

These guys seem to offer some products in that space however it seems many of them are of the remote control variant (not fully automated). Crop dusting is a pretty routine task and you could easily program a drone to cover a specific field at a given time and let it do its thing. The main issue you will face in the current market is simply useful load. Ignoring the military drones out there most of the commercially available unmanned vehicles are on the smaller side and simply don't have the useful load of something like a Piper Pawnee that is used for current crop dusting.

It does seem that the FAA has approved some drones for this use but that was recently so Im sure it will be a little while before we see them. Although it seems Japan has been using them for this purpose for some time.

So yes tank carrying drones do exist (but I cant find the volume of the tanks, they do however appear pretty small). 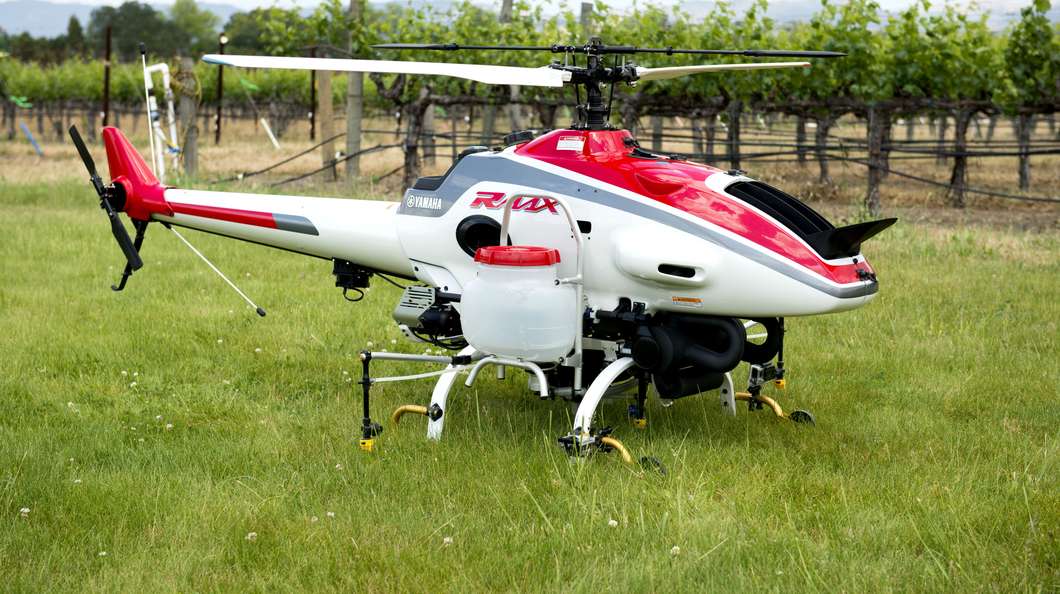 FWIW any small drone could be modified to carry a tank and spraying device provided it could lift it. All things considered people have built some pretty big RC planes

I once worked in the UAV company, which was contracted to supply a system to identify trees. To achieve this, all you need is a good camera and an image recognition software (now to be easily written using .NET).

I have not heard about drones carrying such large amounts of chemicals, so sorry about that. In this part of the world (eastern Europe) we have enough of our own, conventional planes which do the job just fine (like PZL-106 Kruk). I guess buying drones to do that would not be economical (again I'm just speaking for my country)

I am not an expert, but i have seen a few times Octocopter being used in agriculture industry. To carry a thanks of chemical or maybe for watering down purposes, it need 8 rotors to make it more stable. But it is depend on how large the farm or the area you want the drones to be utilized.

I have seen some farmers will custom or attached something like arm to drones. It depend on the load that specific need to carry or how you want to use it. Hexacopter or maybe quadcopter if only for simple task or experiment. But to see Octocopter do the job is normal for me. Seen dozen of times.

Not the answer you're looking for? Browse other questions tagged aircraft-design unmanned-aerial-vehicle fire payload or ask your own question.

17
Why are predator drones being used over civilian California?
17
Why don't airlines provide smoke hoods?
3
Do airplanes have vapor recovery systems for refuelling?
66
Why are military drones shaped so strangely?
12
Can we eliminate the center tank of large passenger planes?
1
How does the control-board on small drones govern their flight?
0
Are piezoelectric energy harvesters too expensive to be used commercially as a power source in drones or small aircraft?