By increasing the power and the blade chord length (in other words, increasing the solidity of the rotor), this may be increased to maybe 6 kg or more, but a single fan would probably never lift more than 10 kg mass.

Disc area is one of the most important parameters, even a 30 cm disc would generate 4 times the thrust. 60 cm would make almost 65 kg.

Apparently, a 50 cm diameter disc can possibly generate 45 kg thrust on its own. So two of them could carry and maybe even lift-off a person equipped with this backpack (the person + the system must be less than 90 kg). 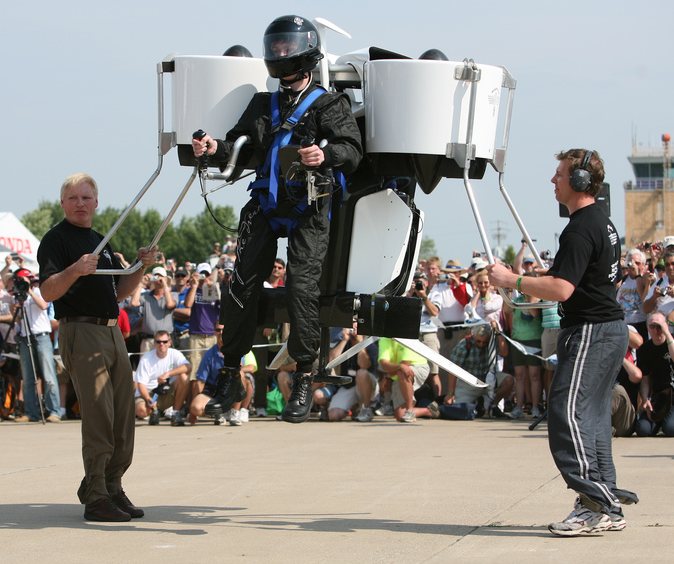 ConraddusConraddus
1
$\endgroup$
3
Add a comment  |
Highly active question. Earn 10 reputation (not counting the association bonus) in order to answer this question. The reputation requirement helps protect this question from spam and non-answer activity.

16
What are the advantages and disadvantages of ducted fans in designs such as the Airbus E-Fan?
5
What would be the potential thrust of an "electric jet" like Lilium's?
3
What is the equation for calculating static thrust?
2
How to calculate optimal prop diameter, pitch, torque and power coefficient given required thrust?
1
How can I calculate the thrust of a fan given the diameter of the blade?

5
How is the lift generated by a number of out-of-plane staggered wings calculated?
5
For a large commercial plane on landing, does the L/D ratio increase, decrease, or not change much?
5
Is it possible to maintain horizontal flight with the angle of attack above critical value by increasing speed?
1
How can I calculate the thrust of a fan given the diameter of the blade?
3
What is the definition of Lift?
1
Is it possible for the lift force unit vector to be equal to the weight force unit vector?