Can airliners benefit from vertical take-off and landing?

Would it be possible to design an airliner (for example as big as a A320 carrying over a hundred people and travelling at 0.85 mach) to perform VTOL?

The closest to what you ask was maybe the Do-31 experimental VTOL transport. 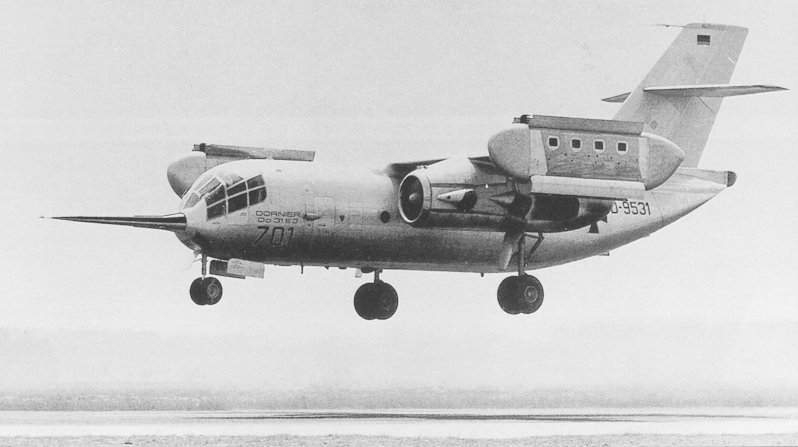 Dornier Do-31 in hover. Picture Source

It was developed to fly supplies to VTOL fighter bases. Makes no sense to have a VTOL fighter fleet if you cannot supply them, right? That was what the Do-31 was for, and the technically successful program folded when NATO abandoned the VTOL strategy in the Sixties.

Compared to regional airliners of its time, the table below shows how much the installation of sufficient thrust has cut performance:

I used the Fokker F-28 for comparison, because it is of similar size and age. As you can see, VTOL easily costs half the payload. 36 fully equipped troops may weigh more than 36 passengers, but they will sit on much lighter seats and have much more frugal accommodations. Note that I used the reduced take-off mass for VTOL flight, but have no information if that mass would have included the full payload. The range is valid only for the higher maximum take-off mass of 24.5 tons, for which a conventional take-off was necessary.

The Do-31 could have fitted the Belgian airline SABENA, which at the time (the Fifties and Sixities of the last century) had the most advanced VTOL strategy of all airlines. They operated regional connections with helicopters, but eventually reverted to regular aircraft well before the Do-31 would had been available. Heli-Air Monaco is still in operation after almost 40 years, but this is more a taxi service than an airline.

Considering not only the increased fuel consumption, but also the increased maintenance cost on more and diverse engines (most VTOL airplanes have dedicated lift engines), the operating cost even at the times of cheap fuel were too high to make the convenience worth it.

I think it is possible to develop a VTOL A320, but it would look very different, would cruise at a lower speed and have a much reduced payload and range. Tickets would be horrendously expensive, though.

EDIT: Thanks to @egid for his suggestion to use mass fractions for comparison. Unfortunately, I found detailed mass data of the F-28 only for a later version, but the expanded table shows the point clearly:

The useful load fraction is the result of dividing the difference between take-off mass and operating mass empty by the take-off mass, showing the sum of payload and fuel as a fraction of take-off mass. Adding lift engines, slow-speed controls and a rear loading ramp clearly reduced what could be carried in VTOL flight.

A big part of making an aircraft that can take off and land vertically is the thrust to weight ratio has to be greater than 1 so that it can work against the force of gravity. The Harrier Jump Jet can only take off vertically when it isn't loaded to full capacity (in which case STOL is used).

For a commercial airliner to perform VTOL, taking the A320 as an example, it would require more than 765 kN of thrust, which is 3.2 times the thrust it currently has. Such engineering is infeasible with current technology.

Not the answer you're looking for? Browse other questions tagged aircraft-design aerodynamics vtol or ask your own question.

1
What are the reasons why we do not have VTOL commercial airliners?
10
Can passenger airliners hover completely motionless in the air?
5
Are there any current projects/plans for a VTOL passenger airliner?
2
Could wing tilting be a mechanism for VTOL and high angle of attack for jetliners?
0
Are there any airliners capable of vertical climb with engine thrust only by pointing the nose up?

8
Why does condensation form on the wing especially during take-off and landing?
8
Can planes benefit from Mitsubishi's Air Lubrication System?
6
What are the limitations to adding wings with engines to a helicopter?
2
How to design a near vertical take off airplane?
3
Ailerons deflection of the F16 in take off and landing gain?
2
XFY-1 Vertical take-off mechanics
1
How do STOVL and V/STOL aircraft differ?
4
Can airplanes benefit from this "roughness" on bird wings?
3
Relation between lift force and torque produced in propeller used for vertical take-off and landing aircrafts