How does a commercial airliner measure its weight/mass?

Other questions currently being answered cover situations regarding planes near, at or even above their MTOW. It raises a more basic question: how is the exact "ramp weight" of an airliner measured or estimated?

On most airlines, luggage is weighed and counted, so the pilot would know within 100lbs or so how much mass is in his cargo hold. He'd also know the "operating empty weight" of the plane itself (the weight of the airframe, all fluids besides usable fuel and the weight of the crew), and the mass of the fuel he's taking on.

The biggest variable, then, is the weight of the passengers and their carryons/personal effects. Last time I flew, I wasn't knowingly weighed and neither was anyone else getting on with me. So, while you know the number of passengers, the total "cabin weight" is a big unknown.

So, do planes have load sensors in their gear which could be used to exactly measure the plane's ramp weight? Or is a median passenger and carryon weight used, with a more conservative total passenger rating used in case a few planeloads err on the heavy side of the bell curve?

Determination of mass and balance (or weight and balance) is a critical task for the crew, an error in this operation may have tragic consequences.

So this was the short answer. To understand why and how to balance the aircraft, there are quite a lot elements to introduce. For those interested, just continue! 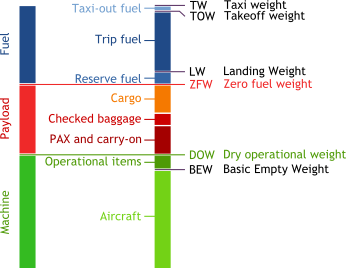 All of these elements must be determined prior to taxi and takeoff.

The mass of these elements are necessary to check that the different maximum weights are not exceeded. However there is another aspect of the masses which needs to be secured: Where are the masses located?

... and balance. Location of the center of gravity vs. the MAC

The masses must be distributed so that the center of gravity of the aircraft is located within limits determined relatively to the aerodynamic chord, and the center of lift.

On airliners the width of the wing is greatest where it meets the fuselage at the wing root and progressively decreases toward the tip. As a consequence, the chord also changes along the span of the wing. The average length of the chord is known as the mean aerodynamic chord (MAC).

As commented by Calchas, using wrong weights for the passengers (adults instead of children) may move the CG to a wrong location, not balanced by the trim, and create strong difficulties during the takeoff and the initial climb.

For an airliner, the PAX portion is relatively small compared to the total mass, so the passengers mass is usually estimated based on standard passenger mass tables and the number of PAX per cabin section. Each airline may provide its own standard mass tables, but standard tables are proposed with the applicable regulation:

For the EU, a new survey was conducted by the European Aviation Safety Agency in 2009 and a proposal for table updates issued:

At this point you may want to download the documentation I'm mostly using for this post: Mass and Balance in Aircraft. We are at page 54.

There are cases where it is obvious the actual mass and balance will be erroneous if the standard tables are used (this is especially true for a small cabin).

In these cases the operator must improve the evaluation by actual weighing of either all or a sample of passengers and their baggage. The procedure already mentioned for establishing standard tables is used (JAR - OPS 1.620).

Putting all elements together

All masses, arms (distance to the reference center) and moments are finally reported on the aircraft manifest to calculate the correction that must be used for the takeoff (trim amount). 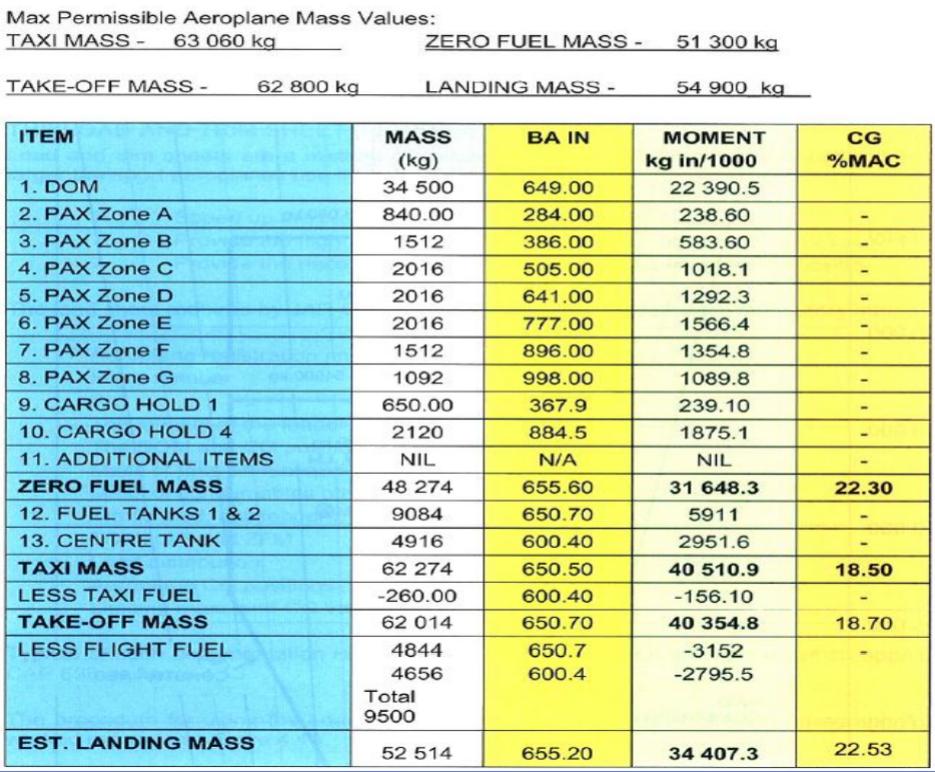 The aircraft is not weighed for each takeoff, still it has been weighed to determine its basic empty weight and its center of gravity. This operation must be done every 3 or 4 years (9 or 18 years in a large fleet, this is a specific process) according to JAR Ops 1.605, Appendix 1.

Platform scales under the carriages may be used: 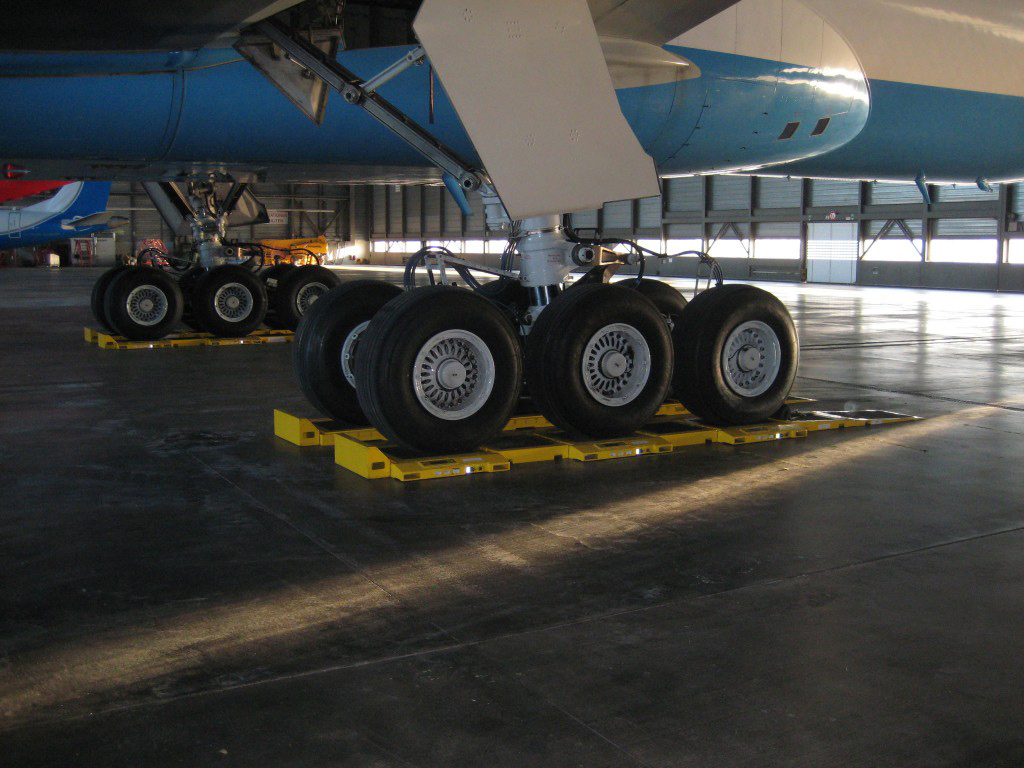 Another method is to use jacks equipped with a transducer at their top: 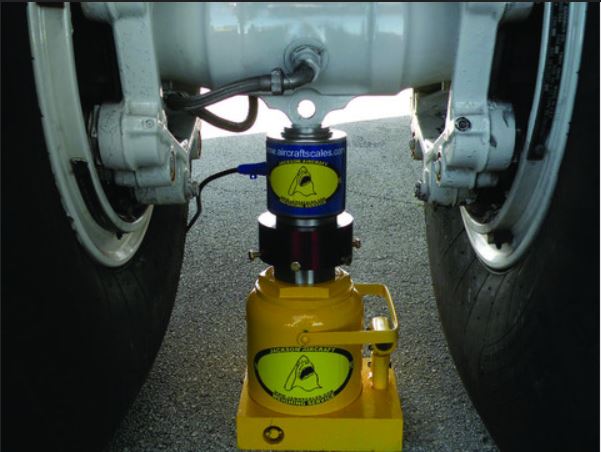 May be interesting too:

Not the answer you're looking for? Browse other questions tagged weight-and-balance commercial-operations or ask your own question.

1
Do airlines use a software to calculate center of gravity?
42
What if all passengers pay to check in extra baggage?
28
Can an airline reject a passenger for being overweight?
28
Why are airlines so concerned with checked baggage weight?
30
Do some airplanes have weighing scales on the landing gear?
25
Are passengers really not allowed to change seats before take-off due to weight and balance?
20
Can passenger distribution cause a parked airliner to tip?
7
Is an aircraft's maximum landing weight really weight, or is it mass?
11
How do airlines handle uncertainty in passenger weight for weight and balance calculations?
1
Why don't airports have weigh stations to prevent overweight takeoffs?
See more linked questions

29
Is passenger weight distribution important on a commercial flight?
15
How often does fuel dumping from planes in flight actually occur?
8
Do additional passengers impact on weight and balance of a domestic airliner?
13
Can a commercial airliner be too heavy to take off?
11
How do airlines handle uncertainty in passenger weight for weight and balance calculations?
28
Can an airline reject a passenger for being overweight?
1
How do I calculate this question? mass and balance
2
Planform Area of Commercial Passenger Airplanes