How does the weather radar work?

I was reading this question about turbulence and how pilots foresee it, and in one of the answers, @Rhino Driver states:

Weather Radar Just like using your eyes, except the radar can see further through haze and other clouds. Typically this is useful for finding embedded thunderstorms, but it can also be useful to find areas of potential turbulence 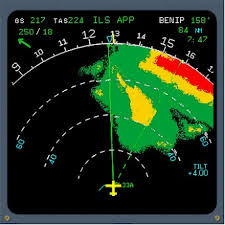 And that make me wonder...

It works the same way any radar works. An antenna broadcasts a pulse of energy and listens for its reflection and interprets the power of the reflection to calculate the reflectivity factor Z, expressed in decibels dBZ (helpful because return power varies across many orders of magnitude). Weather radar can see water, hail, bugs, birds, bats and bigger things, and the ground but not clouds. Higher return power can mean more objects or bigger objects. A basic single-polarization radar cannot tell the difference between a tons of small rain drops and a fewer big raindrops.

The particulars of the radar on any aircraft are generally going to be determined by the antenna size, as the optimal frequency of emission varies for a given antenna. The large S-band* dishes that make up the ground based WSR-88D network are quite big (around 10m). S-band is a good choice because they have low attenuation and can penetrate through storms and see things behind them. Airplanes can't use S-band though, because the antennas are too big to put on the airplane and require too much power to fully utilize them.

Airplane radars are generally in the X-band*. X-band can see smaller particles than S-band but attenuates easier. This means if a big storm is in front of you, the energy doesn't penetrate far into the storm and may not show you the whole storm. These are great short range radars and work well in airborne applications as long as you are aware of the issue with attenuation.

Airplane radar displays typically only display information from the on-board radar and do not downlink any additional information from ground stations. Onboard radar are usually adjustable in the vertical by the pilots, so they can point the radar up or down as needed.

Here is an example of a radar antenna and associated electronics on a Cessna Citation 501: 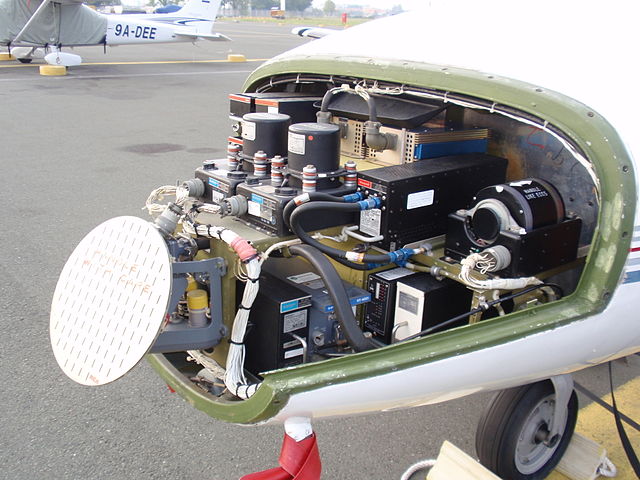 They are not connected to the ground, they are RADARs and operate independently.

The RADAR sends pulses, typically in the 10cm or 5cm range, which are reflected by water droplets. The greater the concentration of droplets, the more the reflection (more power returned to the RADAR) which is used to provide the colours. Green means light density, orange means medium and red high. Not shown is magenta (or purple) which is the really nasty stuff.

Some weather RADARs also use the Doppler effect to show relative wind speed and turbulence in these areas.

They can detect rain, thunderstorms etc and some models, turbulence. You can also change the "gain" of the receiver to produce different displays to better see the bad stuff and can often be tilted up and down to see what's above or below and to get some sense of how high a storm is.

Not the answer you're looking for? Browse other questions tagged airliner flight-instruments radar weather-radar or ask your own question.