What do manufacturers do to reduce cabin noise?

It is being claimed by the Airbus that their new planes offer more sound proofing than those of Boeing, and I myself observed the same. How do airplane manufacturers tackle with the problem of soundproofing the cabin, so as to reduce the noise reaching inside from outside the plane (the engine sounds and the free stream noise)? What proportion of the total aircraft development cost would this be (approximately, say for an Airbus 320 and for Boeing 777)?

I guess you mean this sort of claim:

No matter where they sit, all passengers benefit from the quiet A380 cabin with on average half the sound energy of other aircraft. Passengers' feedback confirms the extraordinary contribution to their general well-being due to the absence of background noise on the A380.

In market research surveys the A320 is regularly rated higher than its rivals for the low level of noise in its cabin. Effective insulation in the cabin is one reason why passengers say they find the A320 a quiet aircraft in which to fly. The A320 cabin is the subject of continuous improvements and in its latest version, the noise has been reduced by a further 1dB.

how do Airplane manufacturers tackle the problem of soundproofing the cabin

There are a variety of methods

One of the main sources of noise is wind. So during the design phase of modern aircraft, computational tools model the aerodynamics of the aeroplane to highlight areas of high airflow that are likely to increase cabin noise. This allows engineers to reshape their designs, says Alan Pardoe, director of product marketing at Airbus. Such techniques, he says, helped the double-decker Airbus A380 plane to be recognised by the UK Noise Abatement Society as the quietest jet airliner on the market.

When it comes to making the A380 one of the quietest aircraft in the sky, it's the small details that count... in fact, more than 3 million of them!

This is the number of tiny perforations in acoustic linings on the large nacelles that surround and protect the A380’s jet engines. The acoustic material helps dampen noise created by the airliner’s four turbofan powerplants, ensuring the A380 is a friendly neighbour wherever it operates in the world. The A380’s nacelles are supplied by Aircelle, which has worked closely with Airbus in minimising the jetliner’s noise output during takeoff and landing. Acoustic panels are applied throughout the engine – from the air inlet to the exhaust nozzle.

Each panel, which is produced from composite material or titanium, is designed to attenuate noise at different frequencies, further improving the soundproofing effect. Noise-reducing innovations include Aircelle’s 2-degree-of-freedom acoustic panels, which use a stack of two honeycomb composite sandwich layers separated by a porous wall.

These panels dampen high-frequency noise from the engine turbines. With much of this noise source successfully dampened by the acoustic treatment, engineers and designers are now focusing their attention on treating other sources of aircraft noise, promising even quieter jetliners for the future.

The Airbus-developed Zero-Splice engine nacelle liner was designed to reduce the noise generated by the jet engines’ large fan, which represents almost half the noise during both approach and take-off. Following extensive studies carried out by Airbus on how to reduce fan noise, it was found that splices used to join the engine nacelle inlet’s acoustic panels generated forward fan noise – which was counter-efficient to the liner’s acoustic treatment. Airbus therefore developed the Zero-Splice nacelle liner as a single 360 deg. piece of composite, which is comparable in size to the diameter of an A320 fuselage.

It is, I think, obvious that measures that reduce engine noise on the ground also reduce it in the cabin.

They also write about how wing sharklets reduce noise.

I'd guess there are many other measures and design choices that are introduced to reduce noise.

What proportion of the total aircraft development cost ...

I'd be surprised if Airbus or Boeing make public any breakdown of their development costs.

You can find general breakdowns like the following but I havent found any that break out soundproofing development costs. 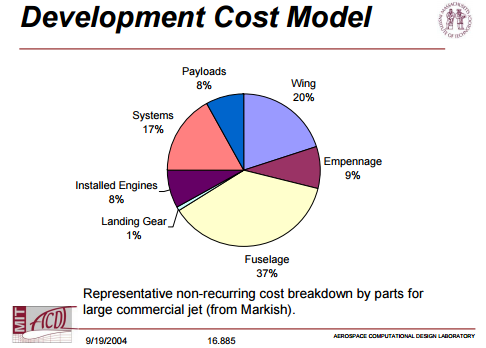 Strictly for the DC-9/MD-80 series there are two methods available.

One is the engine sync system which synchronizes one engine to the other to prevent the droning sound when the engines aren't running at quite the same setting. There are two modes N1 and N2. The system compares the speeds of the two engines and adjust the left engine to match the right engine. When the system switch is turned OFF, the system continues to SYNC the engines using EPR.

The other is an active noise reduction system which adds new engine mounts designed to reduce the noise.

LORD HAS RECEIVED US certification for its NVX active noise-and-vibration control system on the McDonnell Douglas DC-9 and MD-80. The company says that its system is the first to be approved for use on large commercial aircraft, and "...is being considered for several DC-9/MD-80 installation programmes." Approval follows installation of the NVX on a corporate MD-87.

The system consists of actuators on the engine-mounting yoke which counteract engine vibration and so reduce cabin noise. The actuators are driven continuously by a controller based on cabin-noise data from microphones installed behind the trim or under the floor.

The results are most noticeable in the aft cabin, where engine tones typically measure 20dB above background noise, says Lord, adding: "The NVX Active System eliminates these tones on the ground, as well as during take-off, cruise and descent." Programme manager Becky Weih says that noise levels are so reduced that the rear of the cabin "...is no louder than the front". Erie, Pennsylvania-based Lord says the NVX has been approved on several corporate-aircraft types.

Not the answer you're looking for? Browse other questions tagged aircraft-design aircraft-systems noise or ask your own question.

18
What causes descending aircraft to make a noise like a giant blown bottle?
9
How do the cabin noise levels of the A380 and the 777 300 ER compare?
6
What causes noise when a plane is on the ground?
3
What is the definition of "Sideline" in reference to aircraft noise?
10
Is ultrasonic noise from small turbines painful to pets?
2
What are ways to reduce drag and noise generated by the landing gear?
6
Is there any way to reduce the noise and vibration in a C-130 Hercules?
4
What is the cabin noise hertz in typical commercial aircrafts?
0
How to reduce the noise of the supersonic passage(bang)?