How do large airliners de-ice in flight?

How do large airliners de-ice their surfaces in midair? In smaller planes like the ATR or the caravan there are deicing boots as per picture: 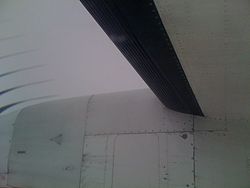 How is this achieved on bigger aircraft, as there seems to be no such mechanism?

Putting this as an answer rather than a comment because of its length.

In response to @romkyns comment, perhaps the 787 pilot knew of the heating elements within the wing but was simply telling how ice was normally handled. I really can't imagine him getting through his type rating oral without knowing that.

Had you asked me the same question back when I was flying 747-100 and -200 aircraft, I would have replied thus:

Icing isn't typically a problem because you're usually not in it long enough at a slow enough speed that the ram air temperature rise doesn't get the temperature above freezing.

If you are getting ice on climb out at your normal climb speed, it was usual to ignore it knowing that the icing would soon stop as you gained altitude, and then what icing you had would soon sublimate. If the icing was severe enough to warrant your attention, the usual remedy was to just speed up to get more ram air temperature rise, but you would, of course, be sacrificing some of your climb rate. The U.S. has a 250kt speed limit below 10,000 feet, but you don't have to (or at least didn't have to back then) observe that if there was an operational need to go faster, and generating enough heat to take care of icing was considered a good reason. You normally wouldn't have to think about that though because a 747 climbing out with flaps up has a minimum safe airspeed in excess of 250 anyway.

One indication that the icing was serious was that ice buildup on the windshield wipers would set them to vibrating and giving off a loud buzzing sound. If you let them do that too long, they could depart the aircraft. As I understood it, the time for that to happen was cumulative over the past occurrences as well as the current occurrence, as it was a matter of fatigue.

Only once in 10 years of 747 flying did I use the leading edge heating. We were in a holding pattern at low altitude waiting for our turn for an approach into Brussels.

Hot bleed air is drawn from the engines and directed through control valves and ducting to the leading edges of the wings and stabilizers.

This is what it looks like on a 727. Note that the upper VHF antenna is also anti-iced to prevent ice entering the engine inlets. 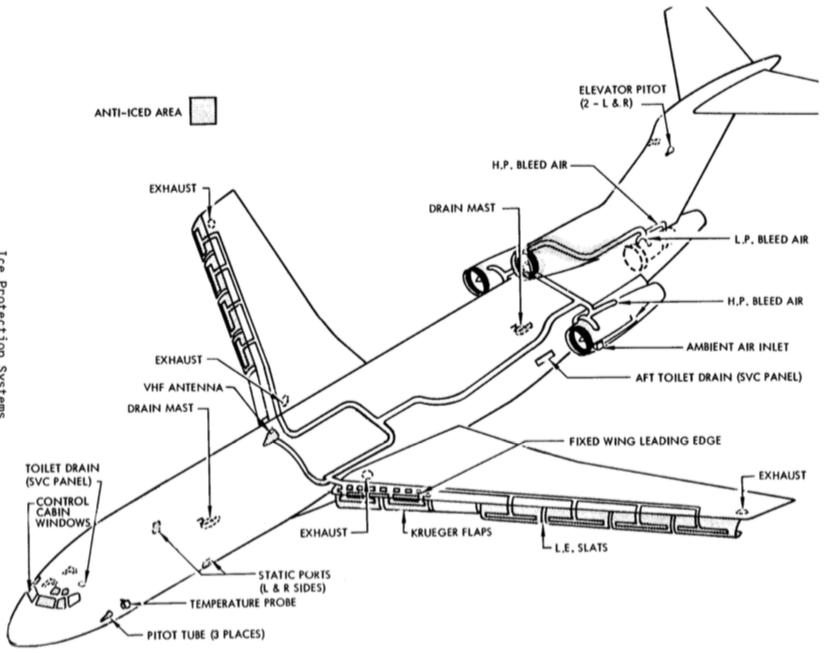 The 787 uses electric heating elements for the wing instead of bleed air from the engines. Engine anti-ice is still done using engine bleed air.

Apart from pumping hot air, there are a few ways to achieve wing's leading edge de-icing. Most reliable is through electric heaters just beneath the wing surface. Other are more tricky.

One solution is an elastic leading edge, which can be pushed out by, for example, a linear hydraulic motor. If the ice thickness is just right, it will crumble and fall off. If it is too thin, it will deflect beyond the reach of the mechanism, and of course if it is too thick then nothing can be done.

Other wings adapt a series of small holes in a leading edge surface, through which a liquid can be pumped, called a "weeping wing" or TKS.

I heard there also are mechanisms which adapted vibrations, but I can give no source on this one right now.

1
Are there any airliners and or aircraft that use bleed air and excess heat from the engine to prevent icing
-1
How does de-icing work in an airliners engine
3
What common forms of deice and anti-ice exist and what future alternatives are being researched?

8
What do they use to de-ice aircraft and runways on snowy days?
3
What common forms of deice and anti-ice exist and what future alternatives are being researched?
19
What's required for a plane certified to fly to Antarctica?
8
Does the AC-130 have de-ice or anti-ice protection for wings and surfaces?
4
Why don't we use hydrophobic (icephobic) coatings over traditional anti-ice methods?
2
What prevents fighters from being fitted with jetliner-style bleed-air wing anti-ice?
5
When and where are anti-ice required for supersonic flight?
8
Why is the Tu-204 virtually immune to wing and tail icing?
1
Are pitot systems protected from ice?