Could the Boeing 787-9 near vertical takeoff demonstration be performed by Airbus A350 aircraft?

I am an aviation enthusiast. A couple of months back I came to know about the difference between piloting Boeing and Airbus planes here.

The very first comparison says this:

Boeing trusts more the pilots: they can supersede the autopilots commands by exerting enough force on the controls

Airbus trusts more the autopilot: if the system is fully functional it will always have priority over the pilots (but they still have room for "non-standard" maneuvers, e.g. commanding bank angles beteween 33° and 60°)

Also another answer stated this:

Now relating the above points with the recent near vertical take off by Boeing 787-9 in the Paris air show 2015: 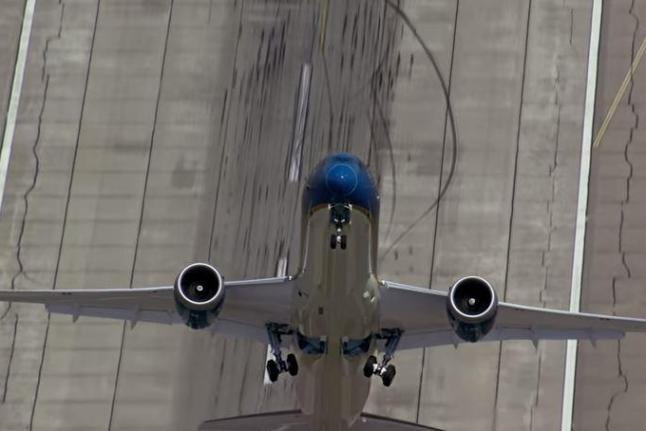 Is this near vertical take off is an example that "Boeing aircraft leave ultimate control mostly to the pilot"? If Airbus aircraft trust the autopilot more, would they allow this type of takeoff as it is done by pilot by pushing the engines to extreme? Also, is it some kind of mockery by Boeing to Airbus?

For those who haven't yet watched the video, here is the link:

Firstly, as a comment noted, the takeoff was hardly "near vertical", the camera angle makes it look so. The takeoff angle in the video certainly is much steeper than a normal one, but Airbus aircraft are more than capable of doing the same - in fact an A350 did very much the same thing at the Paris Air Show.

The notion that an Airbus doesn't let the pilots have complete control is a little bit misleading. I'm not going to go into too much detail in this question, but what most people are referring to when they say that is the Alpha Protection system. This system kicks in when the aircraft is at extreme angles of attack. For example, if an aircraft is about to stall, it will not let the pilot pull the nose up. In any plausible situation the pilot would not want to raise the nose anyway, yet we have seen accidents such as Colgan 3407 where the pilot did exactly that (and, also AF447, however the system was disabled in that crash).

In summary, the Airbus system pretty much only prevents pilot actions that are dangerous (OK it is more complex than that, and the Boeing design has benefits too, but..). Back to your question, why does the Airbus system also allow such a steep takeoff? Because only the attitude was high, but the angle of attack was still within normal limits. These takeoffs are possible on lightly loaded aircraft with engines near full power.

Paris Air Show was quite funny for that: you could see pilots the A350 and on the 787 take off as early and as steeply as possible. I remember seeing the pilot of the 787 progressively take off several meters earlier (possibly something like 20m).

Also, this video was not at Paris Air Show but somewhere near Seattle as far as I know. The ground is nothing like Paris nor near Paris nor continental France. It was also posted to youtube the day after the first take off of the 787 before this year's Paris Air Show: no way they had managed to make a proper video in only a few hours.

It's also important to keep in mind the planes are really empty when they do that: even the A380 manages to fare very well for such things. Now, add 600 people with luggage for a total weight of at least 100kg each (60 tonnes total) and add kerosene too: it'll be entirely different.

Not the answer you're looking for? Browse other questions tagged takeoff airbus boeing boeing-787 airbus-a350 or ask your own question.

0
How did this Boeing 787 perform this near vertical takeoff?
-2
Can any modern commercial airliner currently in service take off vertically?
51
What are the main differences piloting Boeing vs. Airbus aircraft?
15
What is the maximum take off climb angle of a Boeing 737 MAX?
6
What is the typical climb angle (versus the ground) of a single engine piston plane?
0
Is there any practical benefit of the Boeing-787 to perform near vertical takeoff?

51
What are the main differences piloting Boeing vs. Airbus aircraft?
9
Could the Airbus A350 be converted into the role of air tanker / be used for aerial refuelling?
4
Do real aircraft have something close to the GPS/NAV modes in FSX?
9
How does an Airbus pilot decide whether to use HDG-V/S or TRK/FPA guidance?
17
How does envelope protection work in Airbus vs. Boeing aircraft?
15
Do Boeing and Airbus learn from each other?
7
Why do Airbus aircraft typically have less wing flex than Boeing aircraft?
5
How come Boeing invested \$32 billion on the 787 program and Airbus only \$15 billion on the A350?
0
Is there any practical benefit of the Boeing-787 to perform near vertical takeoff?