According to the wikipedia page :

Air vortices can form around the main rotor of a helicopter, causing a dangerous condition known as vortex ring state (VRS) or "settling with power". In this condition, air that moves down through the rotor turns outward, then up, inward, and then down through the rotor again. This re-circulation of flow can negate much of the lifting force and cause a catastrophic loss of altitude. Applying more power (increasing collective pitch) serves to further accelerate the down wash through which the main-rotor is descending, exacerbating the condition.

The vortex ring state has also been listed as a potential hazard in the Wikipedia page for helicopters. What are the various preventive measures used to prevent such a condition?

I am not aware of any technical features which can prevent it. Quite simply, the disc must accelerate air downwards to generate lift. If the helicopter descends into that downward accelerating air, it is recycled through the disc resulting in a catastrophic loss of lift.

The preventative measures are:

I am not an aerodynamics engineer but I doubt that there is a physical solution to this - and if there was, it would likely have been implemented by now.

There's an interesting article on the hazards at wikipedia.

The avoidance tactic mentioned in that article is to avoid rapid descents at low forward airspeed - this would seem sensible as that's where the rotors will be exposed to their own downwash.

And the preferred reaction also described there is to use the cyclic to fly forwards, to move into less disturbed air.

(I have heard that another cause of the condition is flying into narrow spaces among tall buildings, but unfortunately I haven't been able to find a reference.)

When the helicopter descends too quickly with little or no forward airspeed, the downwash curls around and breaks up the airflow on the top of the rotors. The end result is much the same as breaking up the airflow over an aircraft wing, like an aircraft with insufficient forward speed and a high angle of attack... it kills most of the lift. Essentially, the blades stall, and the helicopter drops even faster.

Pulling up on the collective would do the same as pulling back on the stick a stalled aircraft... it would just make a bad situation worse.

The solution is to get out of the turbulent airflow, by either tilting the helicopter forward, or in the video that demonstrates the Vulchard technique, tilting to one side. As you can see in the video, the helicopter recovers fairly quickly, and the mist illustrates how tilting to one side restores smooth airflow on the tops of the rotors, enough to arrest the too fast descent.

Or, as Simon notes... the better solution is to know your aircraft and not allow it to get into VRS in the first place... just as with fixed wing aircraft, you're well advised not to let it get into a stalled condition.

The left picture above from J. Gordon Leishman, Principles of Helicopter Aerodynamics, depicts the Vortex Ring State where the wake below the rotor is re-ingested on top of it. A dangerous situation indeed, since adding power may result in higher vortex velocities only. 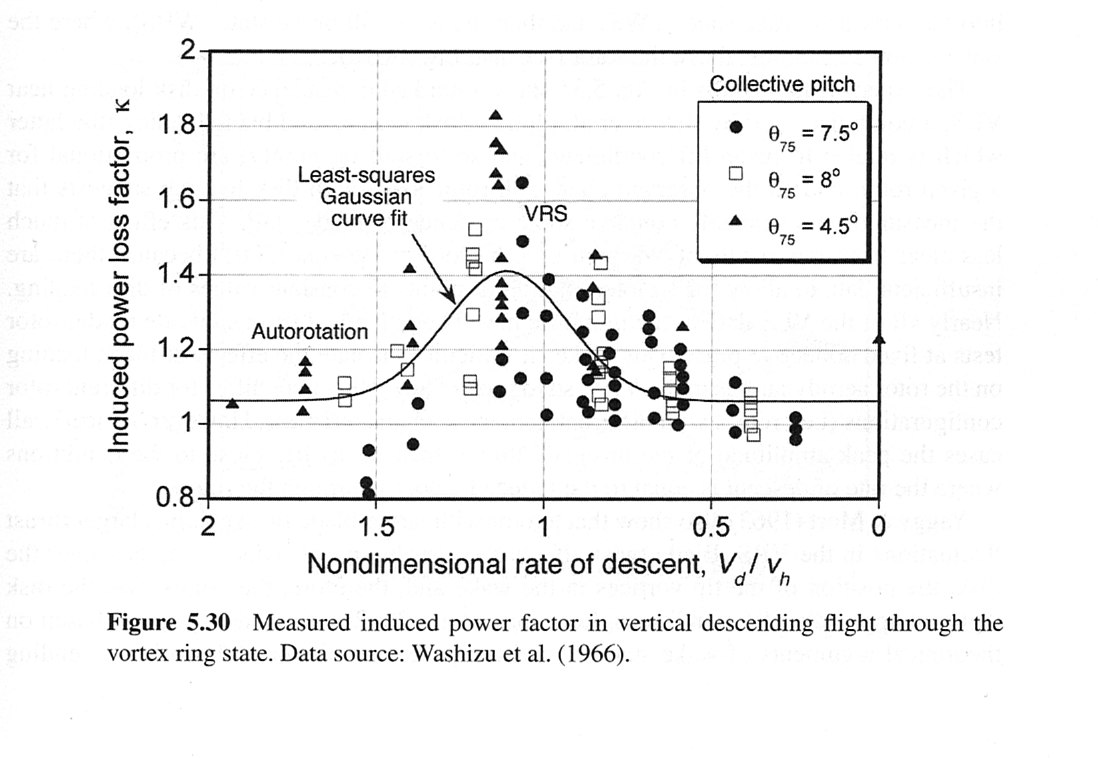 In section 5.3 of the Leishman book a further detailed discussion of the VRS can be found. A quantification is given as induced power loss in VRS: measured data shows a power loss factor of almost 2 in some circumstances, and here lies one of the issues in trying to recover with adding power. The engine is simply not dimensioned to deal with such effective power loss.

Another problem is flow fluctuation, leading to fluctuations in thrust of up to 40% depending on disk loading:

The VRS is accompanied by an extremely unsteady (aperiodic) flow field surrounding the rotor.

All in all a dangerous situation to be in, since the flow fluctuations associate with a loss of predictability. Best avoided, although one of the methods to recover is to reduce rotor Angle of Attack:

Notice that the fluctuations drop off quickly as the disk AoA decreases below 50° and is consistent with piloting experience on helicopters, which shows that a forward speed component causes the rotor to quickly exit the VRS.

After tuning the flight controls of a CH-53 helicopter simulator and going for a test ride, I inadvertently got the sim in a VRS in the thin mountain air surrounding the modelled airbase. The instructor told me to give full left lateral, wait for the helicopter to reach a considerable roll angle, then full right lateral, then mid again; then regain horizontal attitude while pressing cyclic forward. The initial lateral movement indeed changed the disk AoA enough to exit the VRS quite rapidly.

I don't know if this is taught as a recovery practice in the real helicopter though, or if it only works in the (high fidelity military) simulator.

Not the answer you're looking for? Browse other questions tagged aircraft-design aerodynamics aircraft-performance helicopter vortex-ring-state or ask your own question.

40
Can all helicopters hover, and how long does it take to "stop"?
36
Why do police helicopters always fly in circles?
12
Can a helicopter operate continuously in a small, enclosed, sealed environment?
3
What effect does cold weather have on helicopter performance?
8
What are the symptoms of vortex ring state?
-1
Could helicopters use a rear wing to get more lift from the rotor vortex?