How can a stowaway hide in the undercarriage?

I'm curious about how and where a stowaway could hide in the undercarriage of a plane.

According to this news report:

The man, believed aged 24, was found in the undercarriage of the plane and was taken to hospital.

They are fairly easy to access through the landing gear with a little bit of climbing, or if low enough (like the example below) just jump up into.

A graphic about a similar event in Hawaii a few months ago: 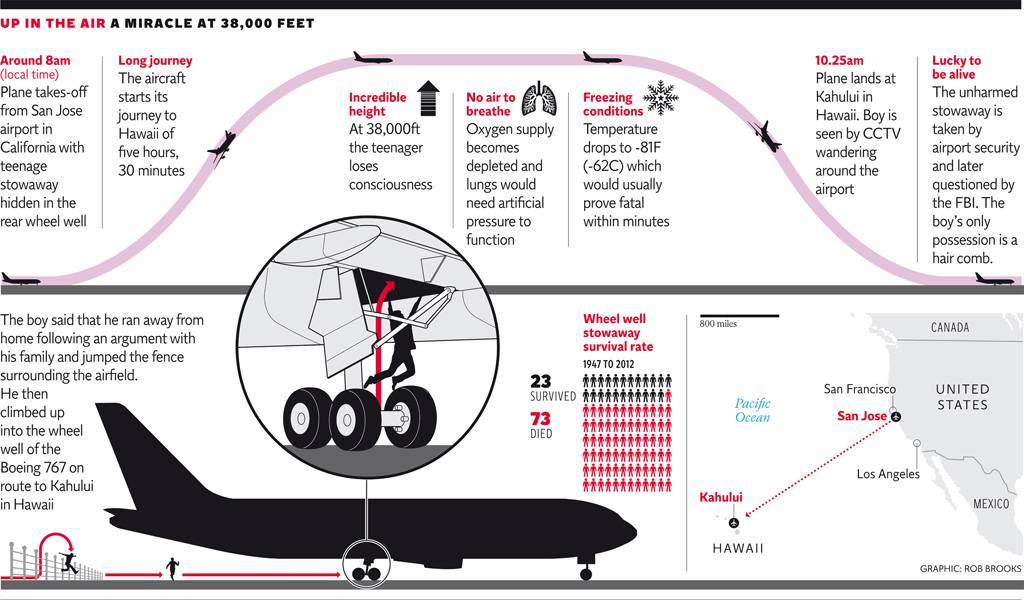 Gear stowaways are not new and there have been plenty of occurrences over the years, unfortunately most result in fatalities.

It is when the landing gear is lowered (and doors opened) for landing that the fatalities occur, assuming they have not already expired from the environment during the flight. Unable to hold onto the airframe and stay off moving parts they (very gruesomely) fall out minutes away from landing. This is also the story that media often picks up.

Not the answer you're looking for? Browse other questions tagged passenger or ask your own question.

24
Exactly where can a stowaway hide in a wheel well?

9
What should pilots do if they observe illegal activity onboard an aircraft?
20
Is it worth reporting that I saw a green laser being pointed at the aircraft as a passenger?
24
Exactly where can a stowaway hide in a wheel well?
6
Airport Security Pre-1970-s?
8
For the 737 Combi, How did changing the proportions of the passenger vs cargo areas work?
2
How likely is it that there is someone knowledgeable about piloting in a flight control room?