How are helicopter cyclic and collective jacks connected?

Regardless of the degree of collective pitch applied, the cyclic pitch controls must retain their full range. Both controls are via jacks, so how are the jacks connected?

The helicopter Collective and Cyclic controls are connected to the rotor bladesby swash-plates. The following is a swash-plate : 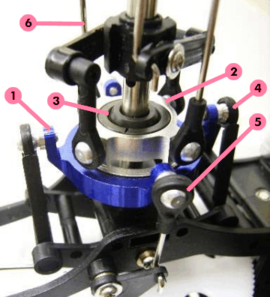 Swash plate in the resting position.

A tilted swashplate giving cyclic blade control. Note the change in pitch of the blades during rotation.

There are three "jacks" providing both collective and cyclic movement to the swash plate, the difference is in how many are moving.

21
Why does a helicopter need cyclic control rather than just tilting the whole main rotor?
-7
How do the propeller blades accelerate air resulting in thrust to push an aircraft forward?