Do airliners or business jets have brake temperature sensors?

Reading the question found here: Do some aircraft lower the landing gear mid-flight

Some of the replies got me curious... Do heavy jets or even business jets have brake temp sensors or indicators?

In the fast-movers we don't have this luxury and I've never even heard of it until now. If we suspect hot brakes we just taxi to the hot brakes area and either wait or ground egress if a fire may occur. We do have wheel speed sensors with anti-skid brakes that use different channels, but nothing that reports to the pilot the brake temperature.

If you guys do have this feature, do you have a indicator that shows brake temperature? Or is there a light that illuminates or even a PFL (pilot fault list) that appears on one of the MFDs?

Brake temperature sensors are quite common on airliners. Turnaround times of large aircraft are often impacted by the required cooling time. This is because during take-off the brakes must be cool enough to absorb the heat of a possible rejected take-off. 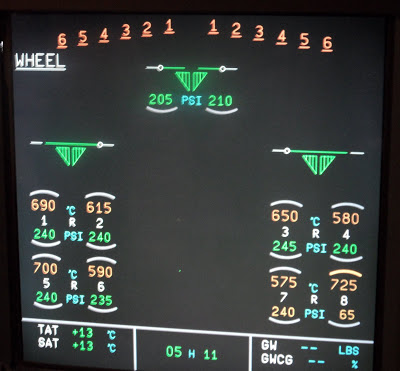 Boeing 747-100 and -200 aircraft had both brake and wheel well temperature sensors. The sensor data was fed to both gauges and alert lights on the f.e. panel.

Brake overheat was mostly a landing event. If the brake temps were climbing rapidly, the f.e. would typically alert whomever was taxing to minimize brake usage. If the brake temp went into the red/alert light came on you were supposed to alert ground personnel to stay away from that side of the tires where the thermal plugs were. It was also common practice to request a huffer to cool the brakes as soon as you parked. Freighters were more likely to have brake heating problems than pax aircraft because they tended to land closer to the max landing weight.

Wheel well overheat was a post takeoff event, caused by tire heating during taxi and takeoff as well as brake use during taxi. There was no temperature gauge, only an overheat light. The checklist action was to lower the landing gear. There were no fire extinguishers in the wheel wells.

6
Do some aircraft lower the landing gear mid-flight?
7
Were my airplane's wheels under-inflated?

10
Do airliners have an "anti-pilot" warning system?
1
Does an aircraft like the Airbus A-320 have external sensors to detect damage to the aircraft?
6
Is wheel well overheat detection (not brake temperature sensor) necessary for commercial jet aircraft?
2
Why isn't cabin air quality in airliners directly monitored with sensors?