Could the US Air Force ever replace the Thunderbird pilots with drones? [closed]

Ask Question
Asked 5 years, 4 months ago
Active 2 years ago
Viewed 917 times
4
$\begingroup$
Closed. This question is opinion-based. It is not currently accepting answers.

Would it be possible or practical for the US Air Force to replace the Thunderbird pilots with drones? The drones could perform more difficult maneuvers and do them more precisely.

The University of Pennsylvania is successfully working on small-scale formation flying. 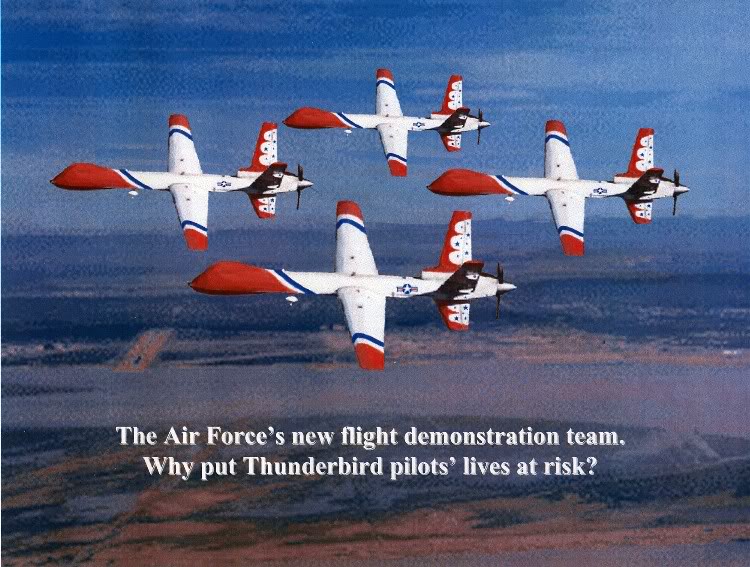 Tight formation flying can be done with stock aircraft and skilled pilots, but drones would need additional sensors and new code in their FCS. Also, you can fly aerobatics even with gliders, but only when a decent power-to-weight ratio is reached, aerobatics becomes a spectator sport. I think it is frivolous for the US Air Force to pay for the development and additional equipment to make drones fly aerobatic displays, but few Air Forces are known for an enlightened budget discipline. I expect, however, that this will be added first by a company producing drones, and for demonstration and marketing purposes, and then the taxpayer will fund this indirectly.

Formation flying was a needed skill for bomber pilots, back then when their bundled defensive weapons provided the best protection against fighter attacks, and aerobatic flying was and still is valuable for fighter pilots. In the days of missiles and UAVs, neither formation flying nor aerobatics are necessary skills anymore, so in a way aerobatic formations are a quaint relic from the last millennium.

To answer the "could" aspect of your question: No, not directly. This would need modifications to existing drones.

To answer the "ever" aspect: Once the services field UCAVs (unmanned combat drones) with a good power-to-weight ratio, having them fly aerobatic displays looks almost unavoidable, but I expect it will not be the Air Force, but the marketing department of a big contractor driving this.

Like others have said, the Thunderbirds mission is recruitment. A drone formation is absolutely possible and would be quite the show, but it would not do much for recruiting civilians if the drones were the only part of the show.

Some might suggest using RPAs to bring a human aspect back into it, but that would not be a great idea either, at least with current technology. Formation flying relies heavily on recognizing small discrepancies and making small corrections to achieve that "locked" appearance. RPAs, like the MQ-9, have low latency if the operator and aircraft are in the same area, but there still is some latency with the signal being transmitted, translated, read, and displayed. In addition, unless the operator is wearing some sort of augmented/virtual reality headset and the aircraft has some 180+ degree camera, the spatial awareness will be severely degraded. Finally, our current RPAs are loiter aircraft, so they are really not fit for being in formation. What I mean is that the wide wings and light-weight design make the aircraft prone to the effects of turbulence, convection, probably even the propwash of the other aircraft in formation.

All that being said, I think once we get the jet-propelled drones more developed and trusted, we might be seeing them in airshows. The MQ-25, a refueling, carrier-based drone, would be a prime candidate for a refueling demo (the ones where the fuel recipient isn't actually connected).

UAVs and UCAVs can be programmed to fly in formation as has already been demonstrated. There may be military applications for this capability. A tactic used by Luftwaffe "sturmgruppe" units against US bomber formations in World War Two was the "company front" assault in which the heavily armoured FW190 fighters, flying in a close line abreast formation, would approach a bomber formation from the rear, dividing the defensive firepower, and then break up at the last moment to attack individual bombers. UCAVs could potentially use similar tactics effectively against enemy ground, naval or air forces in some situations.

Not the answer you're looking for? Browse other questions tagged unmanned-aerial-vehicle airshow us-air-force or ask your own question.

7
Can radars detect small drones?
11
Could a larger consumer drone “take down” a passenger plane?
8
How did Northrop Grumman propose to make the Global Hawk nuclear powered?
8
Can “a drone” damage the wing of “an aeroplane” to the extent it actually threatens its ability to fly?
0
What is the feasibility of solar powered drones?
3
How could so many drones establish contact with ATC?
4
How can air launched UAV's be decelerated?
7
Are there any plans to make the QF-16 into a drone for actual combat missions, or a fully autonomous fighter?