How do Ram Air Turbines get deployed?

I understand that most larger jets have a Ram Air Turbine (RAT) in case of total electrical failure (for instance, when you run out of fuel) in order to at least have some hydraulics and a couple of instruments. The RAT gets deployed automatically at the loss of electrical systems.

But how does it get deployed? I'm interested in the triggering mechanism, as, during a complete electrical failure, there can be no electrical trigger (computer or otherwise). So it must be something mechanical. Or are they relying on batteries?

I figured it'd have to be some failsafe mechanism, like stored (hydraulic or otherwise) pressure held back by something like an electromagnet or hydraulic pressure, cut the power and presto, the RAT deploys. However, I've never seen one deployed on an aircraft sitting on the ground with the power off, so that kind of shot down that idea.

The RAT is automatically deployed on many aircraft, including the CRJ and A320 series, but it can be manually released as well. In between the loss of power and the RAT spins up you have the batteries to fall back to which are normally fully charged.

The Airbus Manual has the following comment on the APU:

In case of total loss of all main generators, the RAT is automatically extended and drives the emergency generator via a hydraulic motor. The EMER GEN supplies the AC ESS BUS and the DC ESS BUS via the ESS TR. The ECAM WD remains powered, with associated procedures presented. Alternate law is operative through ELAC 1 and SEC 1

While this is for the CRJ, who call it an Air Driven Generator (ADG):

In the event of a complete AC power failure in flight, the ADG will automatically deploy and supply emergency AC power to the ADG bus and to the AC essential bus. If the automatic deploy function fails, the ADG can be deployed manually by pulling the ADG manual release handle on the ADG CONTROL control panel at the rear of the center console.

A RAT, with the spring loaded actuator visible: 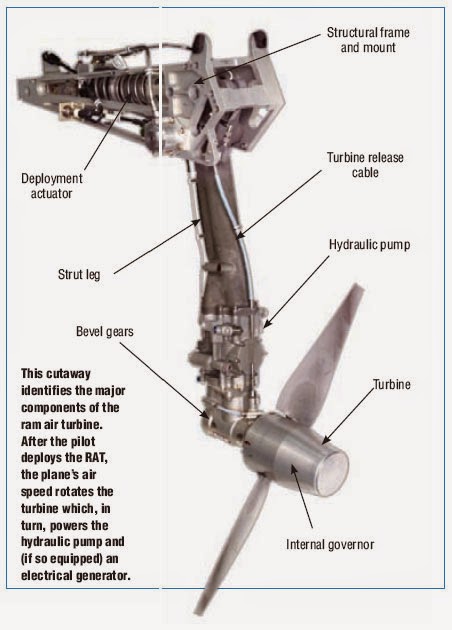 I think most if not all are spring loaded, and have a little help from gravity on the way. You'll also notice that many are stored to be pushed into place by the jetstream.

Have a look at this video below around 0:20. The slow upwards motion suggests that it's having to reload the spring energy at 1:20. The doors are attached mechanically.

Taking a look at the Airbus Electrical System: 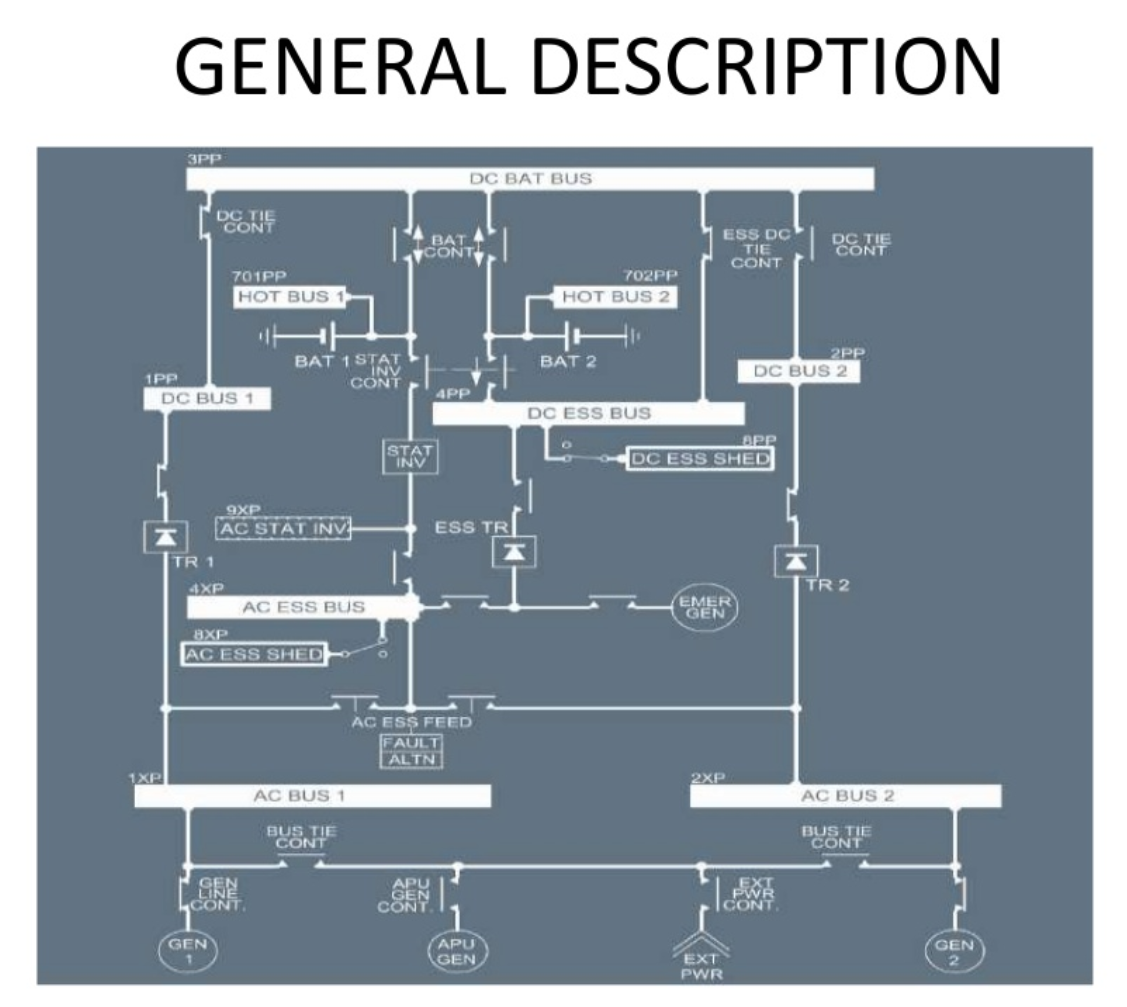 As can be seen, there's a hierarchy to electrical power use, and the battery feeds the essential busses, where the RAT deployment would be included. If I'm not mistaken, power is very limited: You loose some of the more fancy control computers along with the non-necessary stuff, like the copilot's displays, as can be seen in the following video.

Bear in mind that some aircraft, such as the 747 (up to -400), do not have a RAT on the aircraft, and rely on the windmilling engines to provide sufficient hydraulics to control the aircraft, and as such there's no deployment of sorts necessary.

But how does it get deployed? I'm interested in the triggering mechanism, as, during a complete electrical failure, there can be no electrical trigger (computer or otherwise).

Think the other way: it is not difficult to create a mechanism which deploys mechanically when there is no voltage.

I am unable to get any actual blueprints but I tried to show you that moving something when a voltage is gone is not necessary a difficult mechanical engineering task.

But how does it get deployed? NORMAL: RAT is retracted (by manual cranking or by electric motor), against heavy spring bungee force and locked in faired position.
EMERGENCY: RAT is unlocked and the spring bungee extends the RAT in to airstream.

Not the answer you're looking for? Browse other questions tagged safety aircraft-failure aircraft-systems or ask your own question.

0
How is the RAT on the Airbus A320 family manually deployed?
19
What role did the RAT (Ram Air Turbine) play on US Airways flight 1549?
11
Why are thrust reversers so unreliable?
3
Is solar power used (as auxiliary power) on commercial aircraft?

17
Is there any limit to how many times an aircraft evacuation slide may be deployed?
15
Are the window wipers on jet aircraft ever deployed in flight?
11
Is there a maximum airspeed to deploy a ram air turbine?
6
How to get out of icing conditions asap?
3
Where does the air enter the passenger cabin?
28
Does a Boeing 737-800 Have a Ram Air Turbine (RAT)?
5
What dictates the A320's 'emergency ram air inlet' operation?
2
How do check valves regulate the air in a multi-engine airplane's vacuum system?