How many people can stand on airliner's wings?

This photo of Allegiant Air flight 331 got me wondering: how much weight would a typical airliner's wings be able to hold? 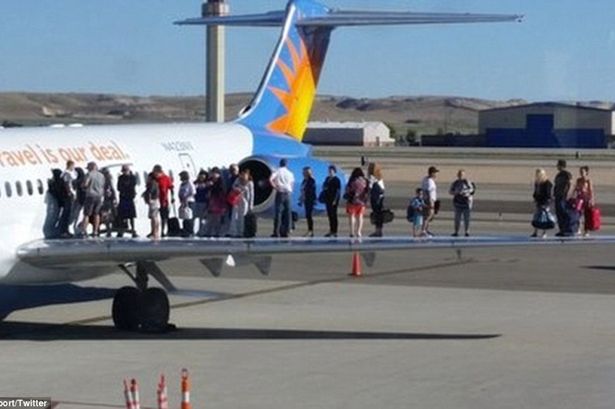 Aside: Apparently these folks didn't realise that if they smell gas in the cabin, they probably shouldn't decide to go out of the emergency exits and stand ON TOP OF ITS TANKS! God forbid one of them gets nervous and lights a smoke!

My question is basically: how much weight are airliner wings required to hold $\div$ the average passenger weight? Theoretically how many people? :)

Disregarding the fact that the wing load vector on a passenger jet usually points up, not down, the wings will usually bear most of the load for the entire aircraft. The MTOW for an MD-80 is 63,500 kg. If an "average" passenger is 80 kg, then that is 800 passengers. Obviously that is going to be greater than the number of passengers on the flight, because those wings had already lifted those passengers (and the rest of the plane) into the air in the first place.

The specific numbers will vary by aircraft type and model, but from an empty dry wing, you can add thousands of pounds of fuel to each wing. Then on a winter night, add several pounds of ice/snow to every square foot of the wing's surface, which can easily remain there for hours or days. Granted, this is all weight that is on the wing rather than on the fuselage, but as was pointed out, these wings support over 50 tons of aircraft weight at cruise and can handle over double that at a sustained G load, so these are pretty stout structures. A couple dozen people just isn't that big a load for a structure that can handle loads WELL over an order of magnitude greater on a fairly routine basis.

Each aircraft has its own design for how much it weight it has to hold on the wing. This is incorporated when an airliner goes through certification (I believe it needs to carry 3 times it's design load for 5 seconds, but I may be wrong in that).

Some airplanes are required to hold lots of weight on the wings, not only from the forces of flight, but also by the possibility of evacuations. According to Wikipedia, aircraft such as the Boeing 747 can hold 740 kg/m2. With a wing area of 525 m2, this means that the wings can hold 388 500 kg. Assuming each passenger is about 100 kilograms, that means you can hold 3885 people on the wing at once. That is, of course, if you can manage to fit them all in that gaggle without slipping off. It'd be pretty tough getting 5 people in a square metre, would it not?

Everyone pointed out that the total weight won't be a practical limitation. But what may be the limit is the local pressure on the wing skin. Aerodynamic forces are nicely distributed over the wing area. Not so with shoes. A small lady on high heels may do enough damage to ground the aircraft :) Not to mention that some people may start wandering on flaps and other "no step" areas, which may also cause structural damage.

Not the answer you're looking for? Browse other questions tagged airliner passenger wing or ask your own question.

11
How many active large commercial airplanes are there?
5
How many warning signals are voiced in modern airliners?
0
How many of this aircraft were manufactured?
7
How do pilots of small planes know where to move people?
4
How should I build removable wings on a home build?
1
How heavy are modern cantilever monoplane wings?