What is P-Factor in Propeller Aerodynamics? [duplicate]

What is the P-Factor when we're talking about a Propeller Aerodynamics ?

If, however, the airflow hits the propeller at an angle of less than 90°, the resulting force will tilt towards the flow direction and shift away from the center of the propeller disc in a direction orthogonal to the directional change.

Example: You fly in a single-engined plane, the two-bladed prop is spinning clockwise when seen from the pilot's view and you push the left pedal such that the aircraft flies in a sideslip. If both propeller blades are level, nothing much changes, but if the propeller turns another 90°, both blades will see very different flow conditions (see the sketch below): 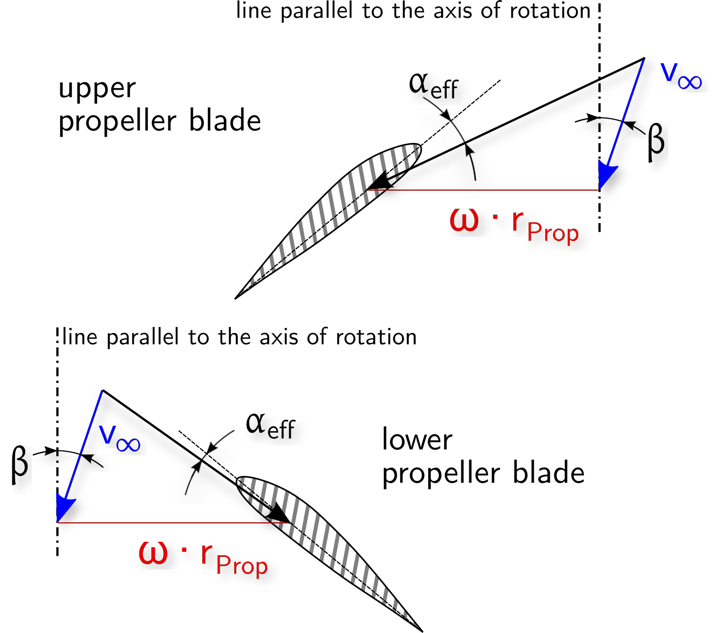 For the upper blade, which moves from left to right, the sum of circumferential speed ($\omega\cdot r_{Prop}$, red) and air speed ($v_{\infty}$, blue) is bigger than that of the lower blade (black arrows) and hits the blade at a larger effective angle of attack $\alpha_{eff}$. Thus, the lift force created by the upper blade is much bigger, and as a result it will act at a point on the upper half of the propeller disc.

The same happens when the plane flies at a high angle of attack and high power (ground run of a taildragger, or climb) and the airflow hits the propeller disc slightly from below. Now the thrust force will move to the right and tilt slightly downward. This will cause the aircraft to turn to the left and must be compensated with right rudder.

This effect is sometimes called p-factor, but this is not a factor in an equation, but something you need to factor in when flying at high angle of attack. Note that the rotational component of the prop wash will cause a similar effect when it hits the rudder at an angle, adding to the leftward tendency of the plane.

P factor stems from the fact that the downward side of a propellor generates more thrust than the upward side (because of the helix like nature of the air flow). This manifests its self in a leftward tendency for American made engines, it should be noted that not all engines rotate the same way and its not uniformly a leftward tendency. This causes the plane to yaw to the left under high power and high angle of attack situations.

This is mainly prevalent in single engine prop planes. Twin engine planes (at least modern ones) tend to implement counter rotating propellors to counteract this. Older twins that have props rotating the same way have a critical engine

26
What's P-Factor and why does it occur?
11
Why do propellers on aircraft have a slight offset angle?
6
Constant TAS versus constant GS: What is the influence on turning circle?

26
What's P-Factor and why does it occur?
2
How is the Angle of Attack influenced in the slipstream of a propeller?
5
How to design a propeller for UAV?
3
How do I translate this propeller start procedure into English?
16
Does a windmilling propeller create more drag than a stopped propeller in an engine out scenario?
1
For a same propeller solidity, what are the tradeoffs between blade activity factor and blade number?
1
Retreating Blade Stall, P-Factor, and Gyroscopic Precession