Why do the missiles on an F-16 point slightly down?

I've been wondering this for quite a while: Why do the missiles on the F-16 point down a little bit?

I went and did a little searching and found out that the F-16 isn't the only plane that has this feature, so I'm going assume it's not the F-16s frame specifically. I also doubt it's tactical because all the weapons are pointing down, regardless of the weapons role in combat. In fact I saw a few photos where the bombs closest to the fuselage were pretty level with the ground (and bombs pretty much always go down, so...)

Does it have to do with aerodynamics, or perhaps ease of loading? Why is the load-out on the F-16 mostly pointed slightly downwards?

If you take a look at the picture again, you'll see that the missiles are in fact lined up quite nicely with the nose of the plane. The missiles are not pointed down, they are pointed forward. The wings and engine (and the entire back two-thirds of the plane) are pointed up, which provides the lift to keep the plane in the air during normal flight. You can see pretty well the alignment in reference to the horizon in this picture (found by @jay-carr): 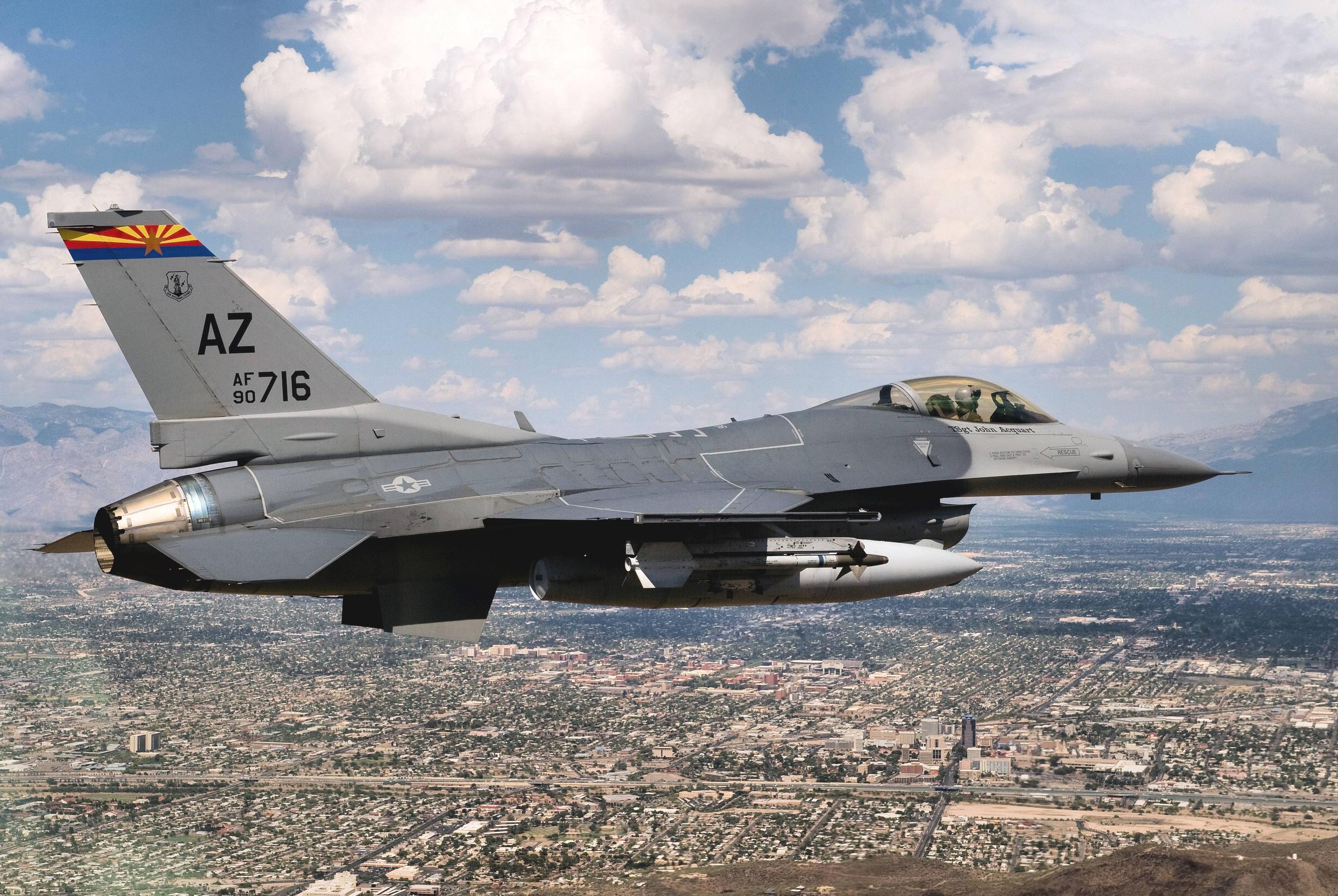 Just to cut off the potential comments about how planes generate lift, reference is here.

Usually stores are hung off an aircraft in such a manner to facilitate a safe auxiliary free-fall release. The AUX release is used if the CAD misfires and the stores cannot be physically ejected downward away from the aircraft. Although this wouldn't really apply to the wingtip loaded aim 9's, so I can't really account for those. In the super hornet the pylons are canted outwards for just this reason.

In fact, the emergency jettison doesn't even release the wingtip aim 9's because, in the case of the Rhino, the wing is more efficient with them in place. The wingtip 9's act as a winglet of sorts.

It's not just the wingtip launchers that are canted downwards. All pylons are canted downwards a couple degrees (~2 I believe). This is to reduce the AOA to 0, thus reducing induced drag at pickle. There might be more to it in terms of aerodynamics, but I didn't engineer the jet.

A lot of testing is done to ensure your munitions and fuel tanks don't come back to greet you.

The B-1 bomber had a similar issue initially where weapons would not exit the bomb bays and just skip along on the laminar flow underneath the aircraft. They had to add these spoilers to the fronts of the bays to break up the airflow. The spoiler is the waffle iron looking plate in the front. It drops down when the bay is opened for weapon release. http://miramar.airshowjournal.com/2005/IMG_0327_2.jpg - philosoguido - https://www.reddit.com/user/philosoguido

The B-2 has similar waffles.

I believe it's a bit of washout in the wing. Washout is a slight twist to the wing, reducing the angle of incidence at the tip and reducing the probability of tip stall.

Not sure about the AIM-9, but the AIM-120 is mounted 6 degrees down from F-16 bore axis. That means that from the pilots point of view its seeker view is centered in the middle of the HUD (below the bore-sight cross which is in upper part of the HUD). That might also be part of the reason for that alignment; to make it more convenient for the pilot to aim when shooting in BORE mode.

That's wing washout. It's built into the wing to help the aircraft maintain stability in a stall. For instance, the F/A-18 has a wing washout of approximately 4 degrees. This means that if the root of the wing is flying at 10 degrees AOA, the tip is flying at 6. This is used to help maintain aileron effectiveness in a stall.

Its so that the thing goes down (and away) from the aircraft when it is released.

For example, imagine the missile was canted up instead of down. Due to aerodynamics it might fly into the wing it was released. The armament is canted downward to prevent this.

Not the answer you're looking for? Browse other questions tagged aerodynamics military f-16 or ask your own question.

33
How are anti-aircraft missiles tested?
20
Why do heavy bombers not carry air-to-air missiles?
6
Why is the F-16 still in service?
4
With similar weapons why does an AH64 Apache require a pilot and gunner when the A10 Warthog only needs a pilot?
5
Does the F-16 have any armor at all?
4
Did the X-15 ever conduct a point-to-point flight?
0
Which way does the F-16 cannon rotate, and why in that direction?