How does the use of Leading Edge Root Extension help in increasing stall angle?

Leading Edge Root Extensions were first used in Northrop F-5A/B Freedom Fighter, which first flew in 1959. After that, many fighter air-crafts have used it, some of which are mentioned after the question. The reason behind using such extension is delay of stall at very high angles of attack. How does the use of Leading Edge Root Extension help in increasing stall angle? 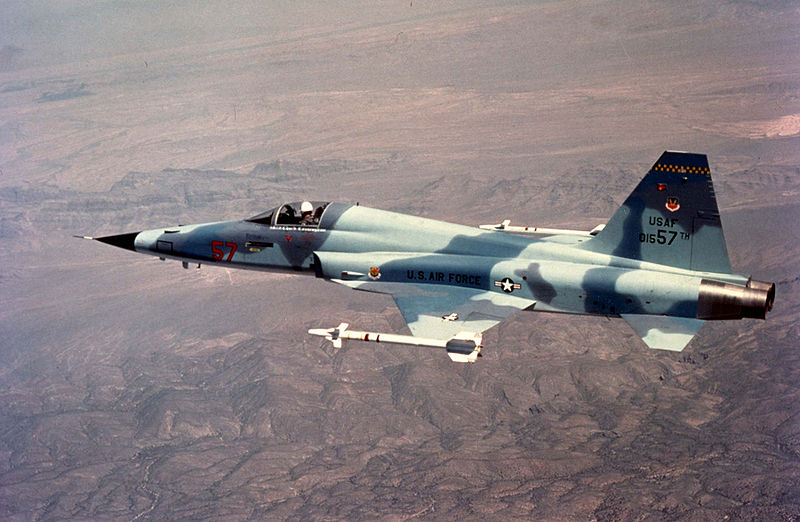 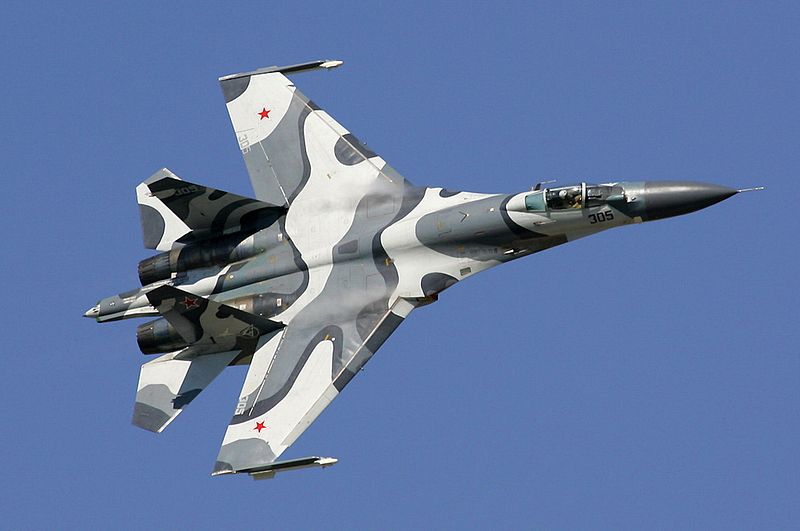 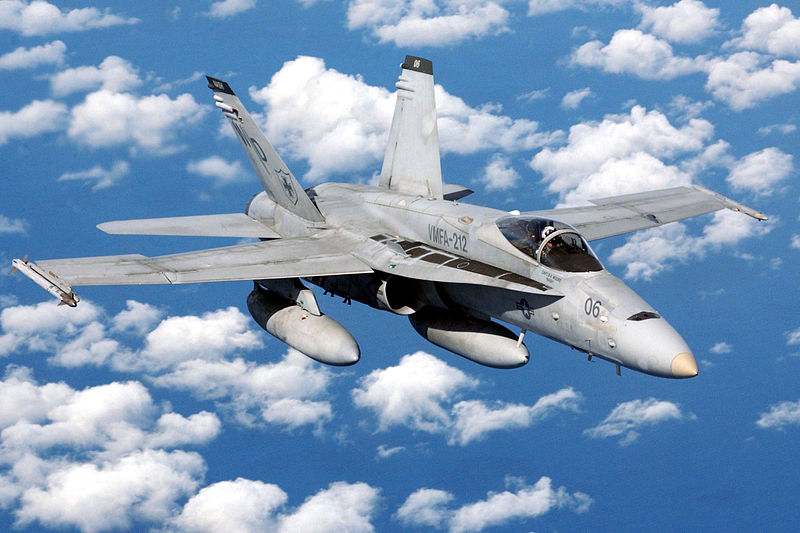 The idea is to generate a vortex near the fuselage. In most cases we do not want any vortexes, as the unnecessary air movement always causes an increase in drag. In this case however, you need them.

As the air flow separates from this small triangle wing while at large angles of attack, it gains a rotary motion (if you look at the left wing standing in front of the aircraft it will rotate clock-wise). This vortex inducts further swirling movement across the wing.

Now, if you are familiar with fluid dynamics, you can imagine that this will decrease air pressure at the top of the wing (not much impact on the bottom side), which is what we want - higher lift is generated.

What is more important in this the case, is the boundary layer. If you provide it with energy, making it more turbulent, it will pay off with sticking to the wing surface even while flying at large angles of attack. Obviously the larger is the angle without stall, the higher lift can be generated. Therefore an airplane with wing extensions can perform sick maneuvers like cobra and other more useful in aerial combat. Of course it requires a huge amount of spare thrust, but you do not have to worry about that in military jets.

@DamalaniSingh: I wonder why you see the need for a bounty when web pages such as this give a good explanation already. In order to avoid a link-only answer, I will summarize the LEX-related gist here (LEX = leading edge extension).

You may know that a delta wing forms a powerful vortex on its suction side at high angle of attack which allows it to work well past angles of attack where conventional wings with less leading edge sweep have stalled. Adding what is in essence a small delta ahead of the main wing will give you the benefit of both: Better L/D and overall more lift at low angle of attack, plus much improved high-alfa capabilities.

The mechanism is the same as for regular delta wings, but the vortex will do its magic not only on the LEX, but also on most of the wing behind it. First a picture of CFD simulations, taken from the Aerospaceweb page mentioned above: 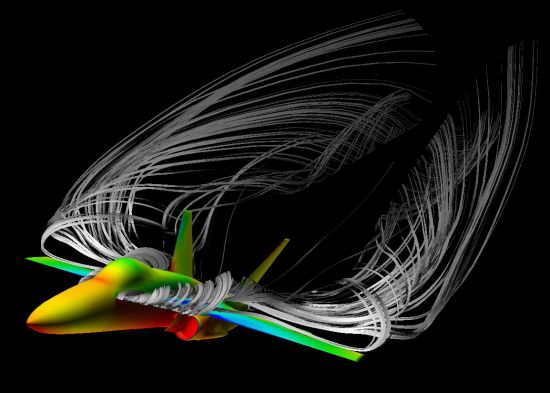 Now proof that the same happens in the real world, again copied from the Aerospaceweb page: 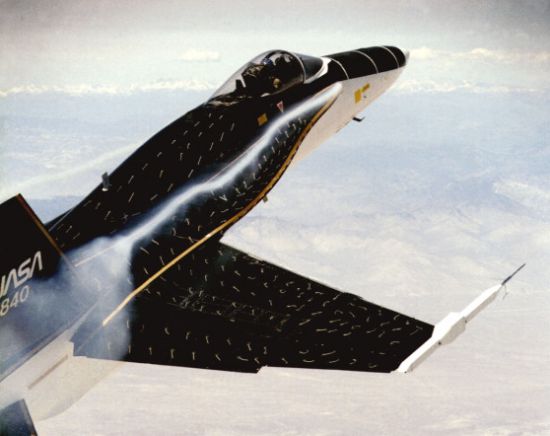 Note the wool tufts on the LEX and wing: The flow over the wing is really separated, because the tufts point in all directions except backwards. What is also visible is the disadvantage at high angle of attack: The vortex bursts behind the wing, which causes extreme vibrational loads on the tail fins. They needed to be reinforced at their root to extend the structural life of the airframe. Again, also the last picture of this answer is copied from the Aerospaceweb article. You should read it yourself! 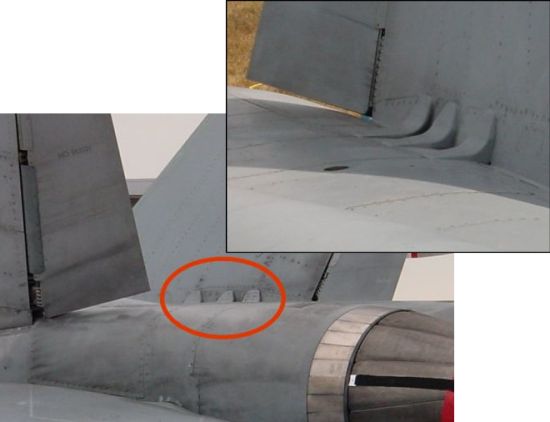 @VictorJuliet: And lastly, please give the bounty to Pawel! His answer was first, and it is correct. I have enough reputation already.

The wing leading edge extension (LEX) creates almost no lift at Mach < 1, since the air flows from bottom to top through its leading edge. In case of Mach > 1 however, the LEX comes into operation. It creates, per unit area, mind, almost the same lifting force as the rest of the wing. As a result, the LEX prevents the aerodynamic center from shifting backwards to some extent. The "ogival" delta wing (used on Concorde) works in this respect in much the same way as the wing with LEX does. To sum up, it all has to do with flying and maneuvering quantities, not pure aerodynamics.

Not the answer you're looking for? Browse other questions tagged stall high-lift-device or ask your own question.

29
What is vortex lift?
10
What advantages come with the wing on the Boeing Bird of Prey?
7
Why is a strake placed on the fuselage in front of the tailplane on the Hawk aircraft?
8
What part of the F-18's wing profile allows for high AoA flight?

35
How does stall depend on angle of attack but not speed?
5
How does the IAS stall speed vary with increasing altitude?
5
Why aren't leading edge root extensions used on airliners?
8
Why does a rectangular wing stall first at the root?
5
Do leading edge flaps increase the critical angle of attack?
2
Does leading-edge droop increase or decrease lift, other things being equal?
0
Leading edge or trailing edge stall?
2
Could leading-edge dynamic stall occur for a tripped airfoil?
8
Under what circumstances does the F-16 and possibly similar fighters deploy leading edge slats?