What kind of filters are being used to filter the bleed air?

Bleed air is using by airplanes for various purposes including deicing and also to feed air conditioning units that maintain temperature inside cabin. What kind of filters does bleed air pass through before reaching the cabin?

Although typical HEPA filters are what's used (speaking from Boeing experience only), it's important to understand how bleed air is used in a typical aircraft environmental control system (ECS). Bleed air is taken from the compressor section of the engine before the fuel is introduced, so it's still relatively clean ambient air. As such, special filtering is not really required, not any more than say a cabin air filter on a car.

Because taking bleed air from an engine robs it of power, commercial airliners will generally use a mix of engine bleed air and recirculated cabin air for the ECS. This reduces the amount of bleed air taken from the engines, and improves their efficiency.

Where the HEPA filters become important is for filtering of the recirculated cabin air. If you were to look under the floor of a commercial airliner that's been in service for a few years, there is a lot of collected dust, dirt, hair, and grime from all the people who've sat for hours on end. Since a significant amount of the air you're breathing onboard is recirculated, the HEPA filters are important for filtering out the typical air impurities you get from having a confined space with lots of people, not necessarily from the engine bleed air.

Its working is as under:

HEPA filters are composed of a mat of randomly arranged fibres. The fibres are typically composed of fiberglass and possess diameters between 0.5 and 2.0 micrometers. Key factors affecting function are fibre diameter, filter thickness, and face velocity. The air space between HEPA filter fibres is much greater than 0.3 μm. The common assumption that a HEPA filter acts like a sieve where particles smaller than the largest opening can pass through is incorrect. Unlike membrane filters at this pore size, where particles as wide as the largest opening or distance between fibres cannot pass in between them at all, HEPA filters are designed to target much smaller pollutants and particles. These particles are trapped (they stick to a fibre) through a combination of the following three mechanisms:

Diffusion predominates below the 0.1 μm diameter particle size. Impaction and interception predominate above 0.4 μm. In between, near the most penetrating particle size (MPPS) 0.3 μm, both diffusion and interception are comparatively inefficient. Because this is the weakest point in the filter's performance, the HEPA specifications use the retention of these particles to classify the filter.

Lastly, it is important to note that HEPA filters are designed to arrest very fine particles effectively, but they do not filter out gasses and odor molecules. Circumstances requiring filtration of volatile organic compounds, chemical vapors, cigarette, pet, and/or flatulence odors call for the use of an activated carbon (charcoal) filter instead of or in addition to a HEPA filter. (ZAND) 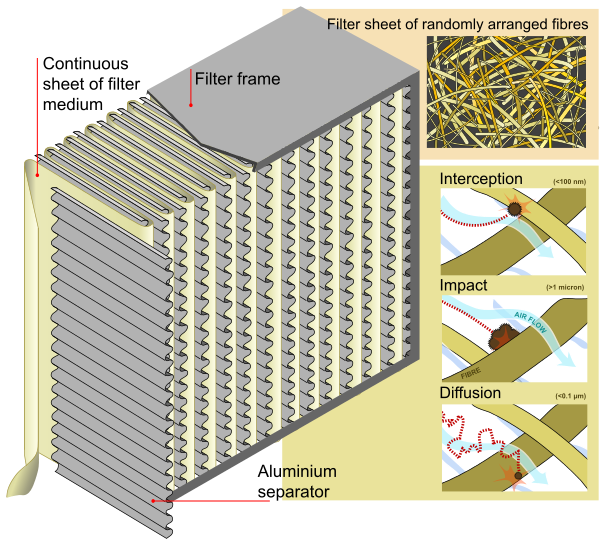 The specifications of HEPA are as under:

HEPA filters, as defined by the DOE standard adopted by most American industries, remove at least 99.97% of airborne particles 0.3 micrometers (µm) in diameter. The filter's minimal resistance to airflow, or pressure drop, is usually specified around 300 Pa at its nominal flow rate.

The original HEPA filter was designed in the 1940s and was used in the Manhattan Project to prevent the spread of airborne radioactive contaminants. It was commercialized in the 1950s, and the original term became a registered trademark and a generic term for highly efficient filters. Over the decades filters have evolved to satisfy the higher and higher demands for air quality in various high technology industries, such as aerospace, pharmaceutical processing, hospitals, health care, nuclear fuels, nuclear power, and electronic microcircuitry (computer chips).

Today, a HEPA filter rating is applicable to any highly efficient air filter that can attain the same filter efficiency performance standards as a minimum and is equivalent to the more recent NIOSH N100 rating for respirator filters. The United States Department of Energy (DOE) has specific requirements for HEPA filters in DOE regulated applications. In addition, companies have begun using a marketing term known as "True HEPA" to give consumers assurance that their air filters are indeed certified to meet the HEPA standard.[4]

Products that claim to be "HEPA-type", "HEPA-like", "HEPA-style" or "99% HEPA" do not satisfy these requirements and may not have been tested in independent laboratories. Some of these sub-par quality filters may come reasonably close to HEPA filtration, while others will fall significantly short, making them truly inferior.[5]

Here is the Wikipedia article

If you are speaking of the commercial airlines, like the 737, 757, 767, etc and Airbus equivalents, they are designed to cruise at above 30,000 feet where there (typically) is no debris to filter.

The bleed air comes from one of the Compression stages of the engine (or from the APU unit when the aircraft is on the tarmac). The bleed air is used for a lot of things (de-icing, defogging, pressurizing the potable water tanks, etc.) as well as providing air for the crew and passengers to breathe and to cool the avionics.

The air in a typical large airliner is completely changed out on the order of six times per hour. The air that comes to the passenger compartment is: half from recycled air that is filtered through a HEPA filter system to remove all bacteria and viruses (sub-micron particles) and half from the bleed air system at a temperature of over 450 deg F. The two are mixed and sent to the airplane’s air conditioning system before distribution to the cabin and to the avionics.

Recently I worked with a group to design a filter for commercial airliners. We have a demonstration model in production. That can be used by aircraft that may encounter volcanic debris/ash during flights. However, in order to be certified by the FAA for a reasonable cost, there has to be a by-pass system so that if the filter fails it can not harm the aircraft safety/operation. A commercial aircraft (or a KC-46A for example) would have two filters, one for each side.

Those filters are for particulates and are useless for smells that come from gases that mix with the air. For that one needs another filtration stage that is like what is used in chemical warfare filtration.

So, if you fly in areas that may get a lot of volcanic ash/debris, check out the new filtration system.

Many aircraft do not have filtration on bleed air.

This FAA publication states that bleed air is cooled, but not filtered prior to mixing with cabin air.

To reiterate, bleed air is a heterogeneous mixture of constituents that may include gases, vapors, smoke, fumes, and mist, each of which is potentially associated with risk of adverse health effect following exposure . It is important to note that bleed air is cooled but not cleaned (i .e ., filtered) before being mixed with recirculated cabin air.

In my experience, few aircraft (I do not fly common transport aircraft, but I do fly turbine aircraft) have filters on the bleed air.

I have heard it said that the B-787 has filters on bleed air, but the last couple of B-787 I flew on used electric compressors for cabin pressurization and had a refrigerant cycle run by electric motors for cooling.

Not the answer you're looking for? Browse other questions tagged bleed-air or ask your own question.

15
Why is bleed air taken from some stage of the compressor used for de-icing? Why not e.g. exhaust gas?
2
How much is air mass flow rate of bleed air used for environmental control system in civil aircraft?
14
How much thrust is lost due to the bleed air system?
3
When are the engine bleed air, APU and packs turned on in the B737?
10
Is the bleed air passengers breathe tapped from the engines before or after it comes in contact with fuel? And why? Isn't this unhealthy?
3
Why and how can a fume event occur?
3
From which stages is the bleed air from a GE90?
1
What is a typical range of air temperature used for engine inlet cowl anti icing?
4
How does a C208B's climate control system that utilizes bleed air for cabin heat work?