"What's our vector, Victor?": What does this mean?

In Airplane there is a famous sequence:

Regardless of the silly dialogue, when the captain asks "What's our vector, Victor?" what is he referring to? Does the scene refer to actual issues that one might discuss with air traffic control?

In which case the vector assigned by ATC is 250 degrees, or 20 degrees south of magnetic west.

To answer the question "What is our vector, Victor?", Victor should state the heading they have been assigned to fly from ATC.

An alternative question would be "What is your heading?" and then you would answer with the direction you are currently flying.

A vector refers to a heading given by Air Traffic Control.

If you want to start learning aviation phraseology, there might be better sources out there:

There is some resemblance of reality but a number of things are mixed up.

Instead of replying with a 'roger', safety critical information is read back. This allows ATC to confirm that the instruction is clearly understood and if necessary they can correct errors.

The scene describes a take-off. In normal life, and assuming this is controlled airspace, the crew will like to know what to do after getting airborne before they start their take-off roll. There is no point in taking off if you are not allowed to fly in the airspace above the airport. That is why the departure clearance (here "vector 324") will be issued first. Vectors will be given as "heading". Very often the departure clearance is a standard route instead of vectors. (e.g. LEKKO two alpha departure). On large airports, departure clearances are given on a separate frequency to avoid congestion on the ground and tower frequencies.

Hand over to departure frequency

Note that, when on the tower frequency, the words "take-off", and "cleared" are only used when the actual take-off clearance is given. This is to avoid (catastrophic) confusion. Since "After take-off" cannot be used, instead the phrase "after departure" or "when airborne" is used.

I'm a little late to this question, but want to add a little for people who aren't familiar with an aircraft heading.

As you said, the dialog is intentionally silly (and not entirely accurate) but most of what they are saying is loosely based on reality.

A vector as defined in the Pilot Controller Glossary is:

VECTOR - A heading issued to an aircraft to provide navigational guidance by radar.

Of course, that leads to:

RADAR VECTORING [ICAO] - Provision of navigational guidance to aircraft in the form of specific headings, based on the use of radar.

Which then leads to:

Wait a minute... They don't define it! Okay, for those people that aren't pilots, a heading is the direction that an aircraft is flying. They are three digit numbers corresponding to the 360 degrees in a circle wrapped around a compass rose: 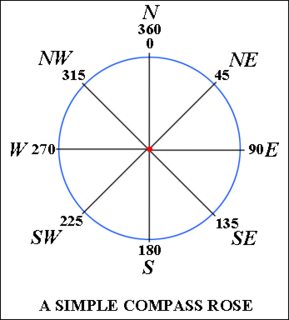 While technically a heading is to the nearest single degree, in most cases ATC will only assign headings that are multiples of ten, or on occasion five, degrees. So, after North, the commonly-assigned headings would be: 005, 010, 015, 020, etc. all the way around until you get to 355 and then 360. After that it wraps around again.

When ATC assigns a heading for a vector, they always have to be cognizant of what happens if the radio in the aircraft fails. Obviously they wouldn't expect you to fly straight ahead in that direction forever, so they include the end result of the vector in the clearance. Usually they also include the direction of the turn for those pilots that aren't very good determining directions. ;-) For example, they could say:

In this case, they expect the aircraft to start a left turn, roll out on a heading of 345 and continue to fly straight until they get another clearance. If the radio failed, they would turn direct to the airport.

Sometimes they want the aircraft to fly a heading until they intercept a published portion of an instrument procedure. In this case, they would say something like:

20
How can pilots lacking instruments interpret vectors given by ATC?
2
What is the meaning of “American 755, turn right, heading 320"?