What are pilot position reports?

I do a lot of shortwave radio listening, and I often listen to MWARA air traffic radio transmissions based out of San Francisco for flights crossing the Pacific Ocean. When giving position reports the pilots always report fuel, position, and some strange names. Usually they give the strange name, and then report "NEXT --strange name here--". Some of the names I've heard are "Diallo", "Gallop", "Gitsol" (sp?). What are these?

The words that you are hearing are navigation fixes that are published on the pacific crossing charts. They are used so that aircraft can report their position to Air Traffic Control using a standard, easy to say name that is located at a specific geographic location.

You can think of them like street intersections. Instead of saying 29 degrees 44 minutes 18.8 seconds North, 95 degrees 24 minutes 38.5 seconds West (GPS coordinates), you would say the intersection of South Shepherd Drive and West Alabama Street1. In the case of aviation though, they take it one step further and give it a five letter (usually) pronounceable name like the ones that you are hearing on the radio.

The navigation fixes that you refer to are standard reporting points located on airways going between the SW coast of the US to/from Hawaii:

To see an actual chart and to follow along, the FAA offers IFR Enroute Aeronautical Planning Charts on their website (these would be on the PORC chart). Here is a low resolution excerpt from the area that we are talking about: 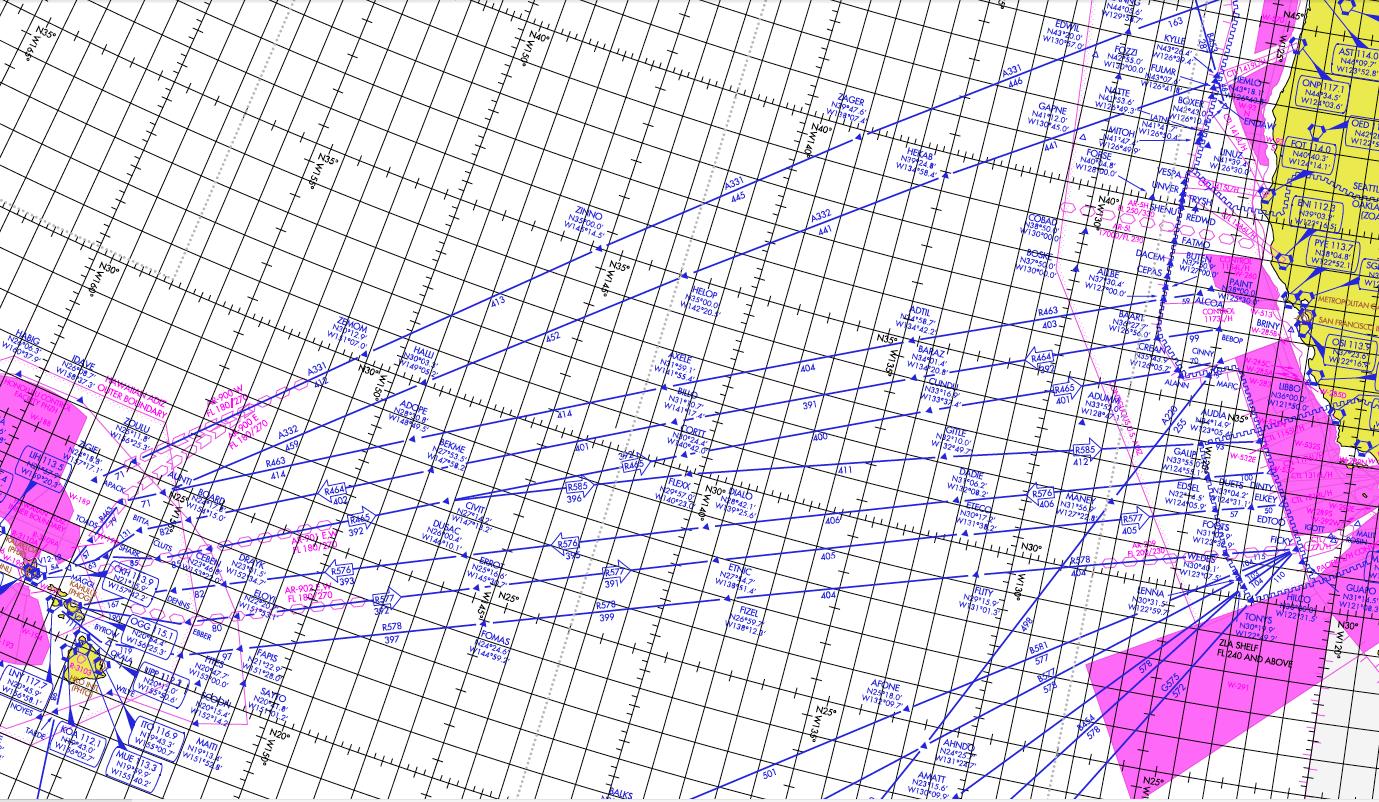 A typical flight will file an airway with only the start and end fixes along with the airway name instead of specifying every fix on the route. For instance, it might look something like GALIP R576 OGG which tells ATC that they will fly directly between all of the fixes on the airway: GALIP DADIE DIALO DUSAK DRAYK DENNS OOG. The filled in triangle at each of these fixes means that it is a mandatory reporting point, and they will be required to make a position report every time that they cross one.

Position reports are given in a standard format specified in the AIM 5-3-2:

1. Position reports should include the following items:

Or a better example:

Then, when they get to DADIE, they do it all over again:

This continues until the aircraft is identified on radar again at which time they can discontinue reporting unless specifically requested by ATC.

1 Mapped here for the curious.

The names that you mention are reporting points. The aircraft that you're hearing are not visible on radar by air traffic control, so they're reporting their location so that ATC can keep track of them. The specific format of the call they're making is published in the AIM:

1. Position reports should include the following items:

(e) Type of flight plan (not required in IFR position reports made directly to ARTCCs or approach control);

(f) ETA and name of next reporting point;

(g) The name only of the next succeeding reporting point along the route of flight; and

These names probably sound like you spelled them, but are all five-letter codes describing a fixed coordinate. For example 'MNATE' = manatee, but there are also many of those you can't really pronounce.

Let's now explain the use of them: Air traffic control needs to know where you are planning to go and also needs to be able to send you to specific positions in order to maintain a safe and efficient traffic flow. Now they can't say "turn right at the next lights and then take the third left" so we need to build our own "streets". Therefore we use radio beacons on the surface and GPS fixes. Obviously it it would be hard to build and maintain a radio beacon somewhere far out in the pacific so the majority of the fixes out there are defined by coordinates.

But why do they use these strange names? Well, THNDR even as "Tango-Hotel-November-Delta-Romeo" is easier to comunicate than Nort 20° 15.5 West 100° 12.3, isn't it? In aviation our GPS systems also use a common data base, which is updated by a fixed shedule. So, other than in your car, we also have all the up-to-date locations and pilots don't have to put in x-digit coordinates but only five-digit waypoints.

Not the answer you're looking for? Browse other questions tagged air-traffic-control radio-communications navigation or ask your own question.

11
How does ATC locate a stealth aircraft if its transponder fails?
7
Does ATC react to pilot position reports?
0
Can single engine/smaller aircraft turn off ADS-B?
0
What units are used by western airliners?

10
What is an easy format for giving pilot reports?
5
What does "traffic in position..." phrase mean?
9
What is the best way to give ATC a position report using only a VOR (no DME or GPS)?
3
What is the accuracy of distance and position calculation?
4
When do pilots have to submit position reports?
7
Does ATC react to pilot position reports?
3
How many radio transmissions per hour occur on a given frequency over Europe and North Atlantic?
5
What, if any, are the rules on ATC politeness?
5
What terminologies are used when ATC instructs a pilot to stop or proceed with his transmission?
2
Pilot communication with ATC partially unreadable