Where does ice collect first on a wing in flight and why?

I've seen some reports that say ice forms on the back half of the wing and on the outside edge of the wing (the part furthest from the body) before it will form anywhere else. I'm wondering if this is true? Where does ice first form on a wing (in flight) in icing conditions?

"Icing conditions" is a pretty vague term that encompasses a lot of various situations that can cause airframe icing (AOPA pdf report, so it's hard to have one definitive answer. That said, you can expect to accumulate some degree of ice when flying through moisture (clouds, rain, etc) when outside air temperatures (OAT) are near or below 36°F / 2°C. Also as a rule, an aircraft's tail will likely accumulate ice faster than the wing in all conditions.

When flying in clouds and rain at the very low end of the icing spectrum, the most likely form of accumulation is rime icing. This primarily forms on the leading edges of wings and tail surfaces, starting (in most cases) with the tail, and looks (initially, at least) a lot like frost. It can create pretty bizarre structures and is pretty easy to spot. Rime ice is (as far as I have seen or read) not going to accumulate anywhere but on leading edges (wings, nose, engine nacelles, tail) as those are the only parts of the structure impacting the relative wind. Either way, it is highly detrimental to your wing's aerodynamic health.

Rime ice can sometimes form 'horns' that start to grow in a V shape forward off the wing, but only in what I imagine are considered severe conditions. The FAA states that rime "typically occurs with temperatures between -15° C. and -20 ° C". 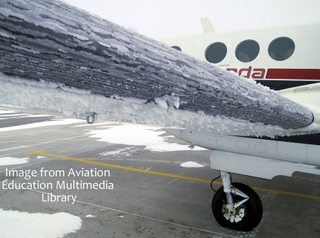 At warmer temps, the most likely form is clear ice, which is basically like having solid water ice form around the leading edges - again, wings, tail surfaces, nose, engines. It pretty much follows the shape of the leading edge of surface it freezes onto, but it's heavy and still messes with your aerodynamics. Again, like rime, it's freezing more or less on impact (but with larger droplets) wherever the relative wind strikes the airframe.

In some unusual conditions, aircraft can encounter precip known as Supercooled Large Droplets (SLD); these are cold enough to freeze but not on impact, causing a form of icing known as runback ice (FAA pdf). In FAA tests, "ice shape simulations were found to cause substantial penalties to the aerodynamic performance" of multiple NACA airfoils. Runback ice can accumulate pretty far back along a wing, making it difficult or impossible to dislodge using heat or boots (supposedly TKS fluid protection can mitigate this). It's scary stuff.

The FAA states that "Clear ice typically forms when temperatures are around 2° C to -10°C [but] more hazardous clear ice shapes [...] tend to form at temperatures closer to 0°C". 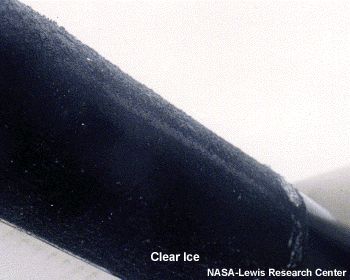 When flying in the middle of the temperature range, aircraft wind up accumulating mixed ice, a combination of rime and clear. According to the FAA, "Mixed ice is most likely to form at temperatures between -10° C to -15° C". It is basically as terrible for aerodynamics as rime ice, and pretty much just as heavy as clear ice. No fun.

8
Is on-board equipment for in-flight de-icing also used on the ground?
6
How to get out of icing conditions asap?
11
What could cause a distinct tube of condensation over a wing?
6
How can I avoid downdrafts and icing when crossing the Alps in a small airplane?
9
If no low-speed compromises were made, what would an ideal Mach-3 wing look like?
9
Can "a drone" damage the wing of "an aeroplane" to the extent it actually threatens its ability to fly?
7
Why do aircraft stall warning systems use angle-of-attack vanes rather than detecting airflow separation directly?
41
Do missiles need anti-icing?