Do the engines still spool up when reverse thrust is selected, but the reversers are not deployed?

The recent question When a large commercial jet touches down, is it committed to stopping? referenced the crash of Red Wings Airlines Flight 9268, which overran the end of the runway at nearly full touchdown speed due to failure of the reversers to deploy. According to the Wiki article, due to a crosswind, the aircraft touched down on only one of its main gear. Even once the nose gear was on the ground, the right main gear strut had still not compressed. The pilots selected full reverse thrust when the nose gear touched down. Since the right gear strut had not been compressed, the reversers were not deployed, however, the engines still spooled up, resulting in forward thrust.

I understand the reasoning behind not deploying the reversers when one or both of the main gear struts isn't compressed. However, it seems to me that preventing deployment of the thrust reversers should also prevent spooling up the engines for exactly the reasons that the Red Wings flight crashed. Applying full forward thrust when the pilots have selected full reverse thrust seems like a very bad idea to me.

I'm wondering whether this behavior is typical of modern transport-category jets. That is, would, for example, a Boeing or Airbus aircraft prevent the reversers from deploying, but still spool up the engines (as the Tu-204 did in this accident) or would they also prevent engine spool up when reverse thrust is selected while thrust reverser deployment is locked out?

Am I missing a reason why still spooling up the engines would be desired when reverser deployment is locked out?

Although not exactly the same thing you're asking you might be able to surmise an answer about Airbus from what happened in the crash of TAM flight 3054.

It was an A320 landing in Sao Paulo with a known inop T/R on the right engine. The pilots retarded the left thrust lever to idle to engage spoilers and then into reverse to engage left T/R but left the right lever in CLIMB. The autothrust turned off and due to the lever positions the left engine went into reverse thrust while the right engine went into full forward thrust causing them to veer off and overrun the runway and crash.

According to Airbus this had been a problem before so they changed the procedure for single T/R. It was previously to bring both to idle then only the working one to reverse. This was apparently confusing the pilots causing accidents so they changed it. The correct procedure is now to bring BOTH levers to idle then at touchdown, BOTH to reverse. Obviously if this is the procedure the A320 will not normally spool up the engine that did not have reverse thrust. The only reason it did was because the pilot left the right lever in the climb detent.

I'm not sure if this is true if the T/R's were PREVENTED from deploying due to the wheels not touching down but I would figure it would.

The way the A320 thrust levers work is that you release a catch then pull the levers aftward past the idle detent. (Not a pilot so correct me if I'm wrong here) Other a/c have a separate set of levers, for reverse thrust, sometimes hinged to the main thrust levers.

According to this illustration I found at this site the DC10 did have such a system to prevent the thrust to be increased until the reversers were deployed. 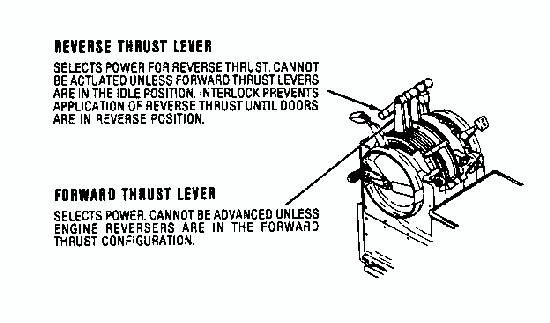 According to a BEA investigation report the B747 has a similar system:

The thrust reverser mechanism is commanded by one lever located on each thrust lever. In the ground position and when the thrust levers are at idle, it is possible to pull the thrust reverser levers back to the "interlock" position which corresponds to reverse. This unlocks the reversers and initiates their deployment. There is blocking in the interlock position when the reversers are in motion or incompletely extended. The use of full reverse thrust is possible when the "in transit" lights are off and the "unlock" lights are on (see appendix 2) to indicate that the reversers are deployed and locked. (BEA site)

To activate reverse thrust you must move throttles back. This movement is physically prevented by the system that monitors if the airplane is in the air. But if something breaks then it's possible that the engine will provide direct thrust.

For the regulatory aspects of this question.

(a) For turbojet reversing systems—

(1) Each system intended for ground operation only must be designed so that during any reversal in flight the engine will produce no more than flight idle thrust. In addition, it must be shown by analysis or test, or both, that—

(i) Each operable reverser can be restored to the forward thrust position; and

(ii) The airplane is capable of continued safe flight and landing under any possible position of the thrust reverser.

(2) Each system intended for inflight use must be designed so that no unsafe condition will result during normal operation of the system, or from any failure (or reasonably likely combination of failures) of the reversing system, under any anticipated condition of operation of the airplane including ground operation. Failure of structural elements need not be considered if the probability of this kind of failure is extremely remote.

(3) Each system must have means to prevent the engine from producing more than idle thrust when the reversing system malfunctions, except that it may produce any greater forward thrust that is shown to allow directional control to be maintained, with aerodynamic means alone, under the most critical reversing condition expected in operation.

(b) For propeller reversing systems—

(1) Each system intended for ground operation only must be designed so that no single failure (or reasonably likely combination of failures) or malfunction of the system will result in unwanted reverse thrust under any expected operating condition. Failure of structural elements need not be considered if this kind of failure is extremely remote.

(2) Compliance with this section may be shown by failure analysis or testing, or both, for propeller systems that allow propeller blades to move from the flight low-pitch position to a position that is substantially less than that at the normal flight low-pitch position. The analysis may include or be supported by the analysis made to show compliance with the requirements of § 35.21 of this chapter for the propeller and associated installation components.

The behavior sounds exactly right, at least in theory. Once you touch down, there are two viable options: Either you perform a go-around (requires thrust) or you come to halt (which can be done with thrust reversers). Continuing at the same slow speed with the same limited thrust never is a good idea.

Not the answer you're looking for? Browse other questions tagged airliner jet-engine thrust-reverser or ask your own question.

23
When a large commercial jet touches down, is it committed to stopping?

18
Why do modern jetliners provide Thrust Reversers at all in their design decisions?
9
What safety mechanisms prevent thrust reverser deployment in mid-flight?
7
Will the steep beta descent mode become illegal for new aircraft?
4
Why do the 737-100/200’s thrust reversers blow fully open if hydraulic pressure is removed while the reversers are partly open?
27
Why are thrust reversers not used to slow down to taxi speeds?
2
Why does the use of reverse thrust in flight on the DC-8 cause areas of separated/reversed airflow over the wing?
6
Why did the Mercure use cascade-type reversers?
5
In aircraft where the thrust reversers are not locked out when airborne, is it permissible to go around after reverser deployment?
2
Are aircraft certified for inflight thrust reversal required to demonstrate controllability in an asymmetric-reverse-thrust scenario?